It is now clear that the world is not on track to achieve the Sustainable Development Goals (SDGs) by 2030. While there is progress on some fronts, such as poverty, it is nowhere near fast enough to accomplish the vision of sustainable development. On several indicators, including stunting in young children, there is little discernible progress over time. Millions are being left behind. This is particularly true in rural areas that are at risk of being forgotten because the focus of policymakers is shifting towards urban areas, where slums, unemployment, and congestion threaten national progress.

It is still the case that most of the world’s poor and malnourished people live in rural areas and depend on the agricultural sector for food and livelihoods. Rural areas are hard to develop. They are not the place of choice for industrialization, still seen by many policymakers as the best pathway to development. They can be distant from major markets, have limited density, and suffer from the divisions that affect where value chains emerge. Rural areas are also often the locus of conflict and ethnic strife, with limited justice and security, and are among the least resilient places to climate change and natural hazards.

In our chapter in the 2019 Global Food Policy Report from the International Food Policy Research Institute (IFPRI), we delve into the issues of how to end hunger and deliver the following recommendations:

In this blog, we focus on the first recommendation, to improve data. It is disappointing that four years into the SDG era, we cannot answer even simple questions like “what is happening to world hunger?” The most commonly used indicators tell conflicting stories. Figure 1 highlights this confusion. Rural poverty, as measured by income/consumption below $1.90 per person per day (PPP) has fallen steadily for decades, in one of the great success stories of global development. By contrast, the number of undernourished people has been flat and may even have risen slightly in recent years. Meanwhile, people’s feelings of food insecurity, as indicated by responses to a survey question as to whether they have enough money to buy food, seem to have heightened across the world in the last 10 years. And one of the most important indicators of malnutrition, stunting in children ages 5 and below (measured as the proportion of children with below normal height-for-age), has held steady at stubbornly high levels: 151 million children remain stunted today. 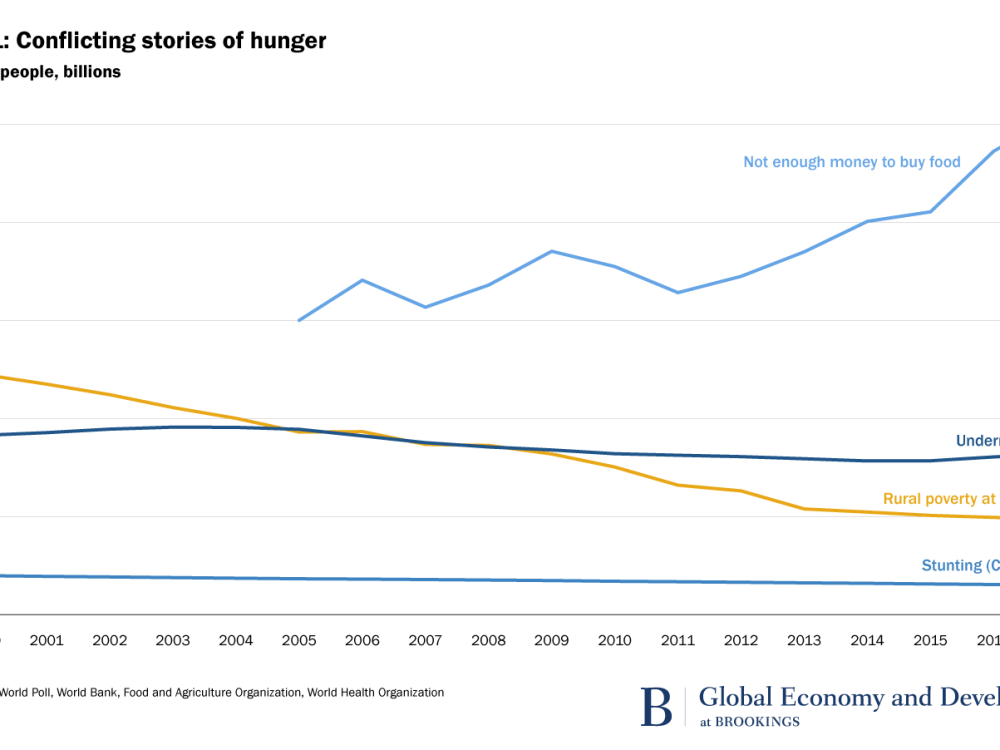 These four indicators paint a confusing picture of progress and indeed the current situation of hunger across the world that makes policymaking hard. Without clarity on results and outcomes it becomes impossible to address whether focus should be on mobilizing more resources, on improving the effectiveness of spending, or on resilience and prevention. Inadequate outcome data means we cannot quickly and reliably learn what works and scale up or replicate those efforts.

Unfortunately, each of the data series in Figure 1 comes from a different organization. The Gallup World Poll gives self-perception figures; the World Bank provides data on rural poverty; the Food and Agriculture Organization (FAO) measures undernutrition; and the World Health Organization (WHO) is the source for stunting. No entity is responsible for reconciling the data or understanding the sources of divergence.

It could be the case that different trends for different indicators are measurement errors. Or it could also be the case that the data are accurate, but are measuring different things. For example, India has reduced rural poverty and increased the daily supply of calories in rural households, but continues to be plagued by high rates of stunting, probably because of the absence of sanitation. It is not surprising, then, to see different trends in India. Confidence in the data has encouraged the government to address stunting in a complementary way by launching a $14 billion plan to build over 100 million toilets, mostly in rural India. So it is possible to have diverging trends across indicators of hunger.

Yet this is the exception rather than the rule. Ever since Amartya Sen famously showed that famines were not caused by the lack of food, but by access and affordability of food, poverty and undernourishment have been generally expected to move in the same direction. This is one reason why food price increases can worsen hunger in some places. They can reduce real rural incomes, especially for families that do not grow enough food to feed themselves. When the experiences across countries are compared, this relationship between rural poverty and undernourishment is found to be strong. But in individual countries, over time, especially in recent years, the relationship seems to be far weaker. It is difficult to tell whether this is because of mismeasurement in the data, or because indeed the relationship is changing in significant ways. Yet without such an understanding, policymaking cannot be evidence-based.

There are many other examples of where we lack data needed for policymaking to end hunger: smallholder yields and amounts of food loss and waste come to mind. These are not available for many developing countries. They should be.

The international community has already put forward some data initiatives to fill the gaps in knowledge. The recently agreed-to 50 x 2030 initiative from FAO, the International Fund for Agricultural Development, the Global Partnership for Sustainable Development Data, and the Bill & Melinda Gates Foundation aims “to make improved agricultural data available in 35 countries by 2025 and in 50 countries by 2030,” and will work to harmonize FAO and World Bank survey approaches to fill the information gap about developing-country smallholder farms. At a broader level, participants at the U.N. Data Forum in October 2018 passed the Dubai Declaration in support of the Cape Town Global Action Plan for Sustainable Development Data, resolving to “ensure that quality, relevant, timely, open and disaggregated data at all levels of geography […] are made available and accessible to all users” and strengthen the internationally agreed-upon framework for modernizing statistical systems.

It is heartening to see a recognition of the data quality problem, but no entity has the authorization to ensure that matters improve. As the SDGs turn 5 next year, it is imperative that quality data is available to help the international community monitor all affected populations. Our proposal is simple. There should be a technical working group to propose ways of improving the coverage, quality, and timeliness of outcome data on hunger. Empower the working group to sort out why there appear to be inconsistencies in the indicators provided by different agencies. Use this analysis to suggest ways of systematically improving data collection. When world leaders come together to review the SDGs in September, we should be able to convincingly answer the simple question: Are we reducing hunger in the world?

Poverty, hunger, and malnutrition: Challenges and breakthroughs for rural revitalization

When will things change? Looking for signs of progress on ending rural hunger