Looking at the past development of life expectancy (see Figure 1), we can see a clear trend of considerable gains across all world regions since 1950. The question arises: Will this past trend continue forever, allowing future generations to live at some point to the age of 150 years and even beyond? Or is there some limit to increases in life expectancy—an upper bound that humankind won’t be able to cross?

Yes, there is a physiological limit to human life, but there is no absolute maximum age, which no human can ever cross. In biology, the concept of life span determines the age a species can reach under optimal circumstances. For humans, this life span stands at about 97 years. So 97 should, in principle, be the limit to human life expectancy. But there is a twist that gives us hope for more.

Figure 1: People are getting older—everywhere. 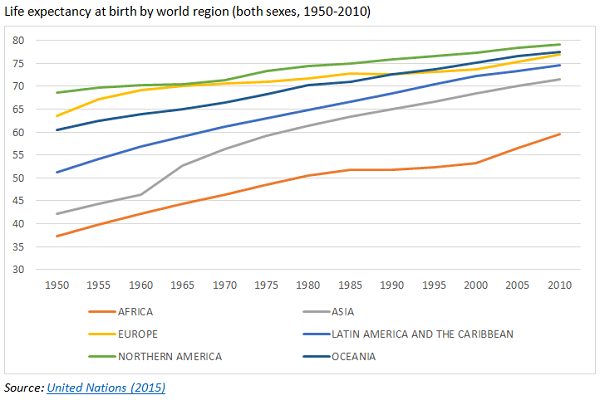 Measuring life expectancy is not straightforward. For example, the latest estimates shown in Figure 1 don’t represent the life expectancy of a baby who is born today. It is an estimate based on a cross section of today’s population, which means it includes, for example, today’s 70-year-olds. Yet, today’s 70-year-olds lived in an entirely different health environment than children born today will live in—in other words, these estimates fail to take into account so-called “cohort effects”—improvements in health conditions of the recent past and in the future. A much better estimate can be found at population.io, which models these cohort effects. According to that website, my recently born daughter has a life expectancy of 93, which is considerably higher than the U.N.’s estimate of life expectancy at birth of 83 years (for females born in Austria between 2010 and 2015; 77 for Europeans).

Given this difficulty of measurement, how can one reasonably project life expectancy into the future? In a recent World Bank book, my co-authors and I warn against the pitfalls of projections based on observing how the world is today and then applying a simple demographic trend into the future. This quickly results in misleading “doom-and-gloom” scenarios.

Biology provides more promising insights. Every species, including ourselves, has an intrinsic life span, similar to an upper bound to life expectancy. One way to interpret life span is this: If you kept a population of, say, flies in perfect laboratory conditions, nurtured them well and kept them generally out of harm’s way—in other words, if you allowed that population of flies to live to its fullest potential—that population would converge to a maximum feasible life expectancy that is intrinsic to this particular species of flies. Life span is independent of time or place—it is the same for all flies around the world throughout history.

Every species is thus subject to an intrinsic rate of bodily decay. For some species, like flies, this rate is very high, they can only live a few days; for others, like the bowhead whale, it is much slower, leading to a life span of about 200 years. For humans, the estimates of life span are around 97 years. Improving health services and overall economic development do not influence this physiological limit. Better health systems make people survive infections and other sickness. However, the healthier we are as young people, the faster we will age when we are old.

Biologists call this the “compensation effect of mortality”: lower mortality at younger ages is associated with faster increases in mortality when getting closer to the physiological limit; related to that is a “compression of morbidity,” meaning that we now are generally healthier at all ages. For example, Italian males experienced a significant increase in survival rates in 1975-1999 (dashed blue line in Figure 2) when compared to 1900-1924 (solid orange line). Another interpretation is that an 80-year-old Italian man in 1999 was—in terms of health—like a 60-year-old around 1900—a significant improvement over the span of 100 years. However, a 95-year-old in 1999 was essentially the same as a 95-year-old in 1900, so no improvement in health at that age.

Figure 2: More people survive to higher ages today than in the past. 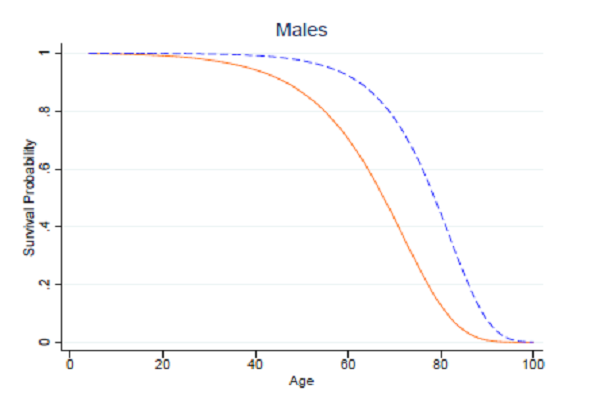 Hence, the 80-year-old today, although much healthier than an 80-year-old 100 years ago, experiences a much higher rate of bodily decay in the last years of live nowadays. Sometime between the age of 90 and 95, the human species reaches its limit of life, no matter how healthy we were while young. Overall improvements in health systems make us all much healthier as young people; but the compensation effect of mortality ensures that the healthier we are, the faster we will age towards the end. Somehow, nature has equipped our species with an intrinsic rate of bodily decay that will allow only few of us to live beyond 97.

So, biology suggest that the limit of human life expectancy is somewhere around 97 years, but there is a twist: Humans seem to be special. If the theory of constant life span was really true for humans, we should observe a slow-down in growth of life expectancy in more developed countries and a convergence across all regions; but life expectancy keeps increasing continuously (see Figure 1). More importantly, a closer look at Figure 2 suggests that 100 years ago, survival probability of Italian males to live another year came down to almost zero at around age 89; but, according to the theory of life span, even 100 years ago it should have come down to almost zero only at age 97, as it is today.

At least for developed countries, the theory of constant life span more or less holds until the 1970s, but after that, life span of humans suddenly started to increase. In other words, we managed to manufacture our life span. In fact, life expectancy and life span are now moving in parallel in developed countries, while before 1970, life expectancy was converging to a constant life span of around 89, as predicted by theory. Somehow, we found a way to slow down the process of bodily decay that was given to us by nature, a truly remarkable development that no other species has achieved before.

The author has recently co-authored a World Bank book called “

Rethinking aging societies: Growing young as you get old