What is the main difference between high-income and developing countries?

Here is my take: People in the former have much more of pretty much everything. Almost everyone living in high-income countries has access to electricity; in poor (low-income) countries, 7 out of 10 people don’t. Most families in rich countries own a car, but only a few people living in the developing world do. On per capita basis, rich economies have 15 times more doctors than poor countries, consume 40 times more energy, have 50 times more ATMs, and so on.

Nevertheless, when it comes to mobile connectivity, rich and poor countries are increasingly looking alike. At the beginning of 2015, mobile penetration (counting unique subscribers) in developed markets was 79 percent, compared to 45 percent across the developing world. The gap among the adult (working) population is even lower since poorer societies tend to be younger (and 5-year-olds don’t need phones, yet); sub-Saharan Africa’s (SSA) mobile penetration among those older than 15 jumps to 69 percent (from 39 percent for the entire population), while Europe’s goes up to 93 percent (from 79 percent). Moreover, developing countries are rapidly catching up and the gap may virtually disappear within a decade. 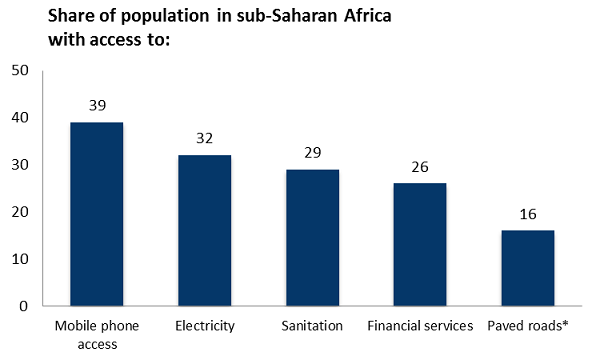 How is mobile connectivity relevant for development?

Lack of resources, be it electricity, roads, or doctors, makes it difficult for developing countries to produce goods and services that are energy intensive, need efficient land transport, or a healthy workforce. However, in today’s modern economy we are witnessing a rapidly expanding array of services with mobile technologies as their backbone. High mobile penetration gives developing economies the capacity to produce and consume these services. In 2014, mobile technologies were responsible for an estimated 3.8 percent of global GDP, of which 2 percentage points came from the associated productivity increases (just think of your drop in productivity when your cell phone battery dies). In SSA, the contribution of mobile technologies to GDP was even higher—5.4 percent. McKinsey estimates that (mobile) internet could make up 10 percent of Africa’s economy by 2025.

What can developing countries do to capitalize on mobile technologies?

The first wave of policies to promote mobile connectivity have already happened in all but a few developing countries: multiple private providers competing or having publicly-owned companies that operate on market principles. Consequently, even in the poorest countries in the world people have affordable and high-quality mobile access; 118 countries, including many developing ones, already had 4G networks in 2014, and two-thirds of the world is projected to have 4G access by 2020. High mobile penetration is a necessary, but not sufficient, precondition for maximizing the contribution of mobile connectivity to economic development. Governments should work on four areas to make the most of these mobile opportunities:

Developing country governments need to continue to work hard to fill their infrastructure gaps in order to move up the development ladder, but at the same time they can capitalize now on their greatest infrastructure asset—mobile phones. They are too great of an opportunity to miss.