This blog post on how social distancing impacts the disparity in COVID-19 infections between Blacks and non-Blacks is part of a two-piece series on the topic. The second post offers recommendations on designing policies to mitigate or assist those most vulnerable is and available here.

As COVID-19 continues to wreak havoc on Americans’ health and the nation’s economy, its effects are disproportionately felt in Black America. In America’s densely populated cities, in suburbs, and elsewhere, the number of cases and deaths among Blacks far outstrips their share of the population overall. One of those cities is Detroit. We use new mobile device tracking data to examine social distancing and how it impacts infection rates in that city, to better understand the virus’s disproportionate impact on Black America.

There is evidence that social distancing measures can decisively flatten the epidemic curve and reduce infections, in locations such as San Francisco and Washington State. Unfortunately, according to Unacast’s social-distance index Wayne County, where Detroit is located, has continually struggled to implement the measure.[1] The county’s rating has consistently fluctuated between a failing F grade and C-minus—a marginal pass. It is critical that we examine whether social distancing disparities contribute in turn to racial disparities. We leveraged anonymized mobility data from SafeGraph Inc., a geolocation data aggregator, and constructed a panel of more than 90,000 devices to examine the links between the coronavirus propagation, social distancing, and socioeconomic factors in Detroit’s neighborhoods.[2]

The analysis shows that as the pandemic wore on, Black Detroiters were less able to stay at home and socially distance. This places Blacks at a higher risk of contracting and spreading COVID-19, not because of choices but because of structural differences in the economy. In further analysis, we find that even after controlling for structural features, Blacks, those with lower income, and the presence of essential workers are associated with higher infection rates in the city.

Detroit remains the epicenter of the coronavirus outbreak in Wayne County, Michigan, which has consistently led the state’s other counties in confirmed case counts. As of May 15th, Detroit’s nearly 10,259 confirmed cases of coronavirus were generally concentrated in predominately Black and lower-income communities. (Overall, Michigan stands out as one of the states with the highest reported race-based COVID death disparities). Ninety percent of the city’s zip codes with the highest number of confirmed coronavirus cases have populations that are at least 80% Black. Median income across these zip codes are substantially lower than the state’s median income. 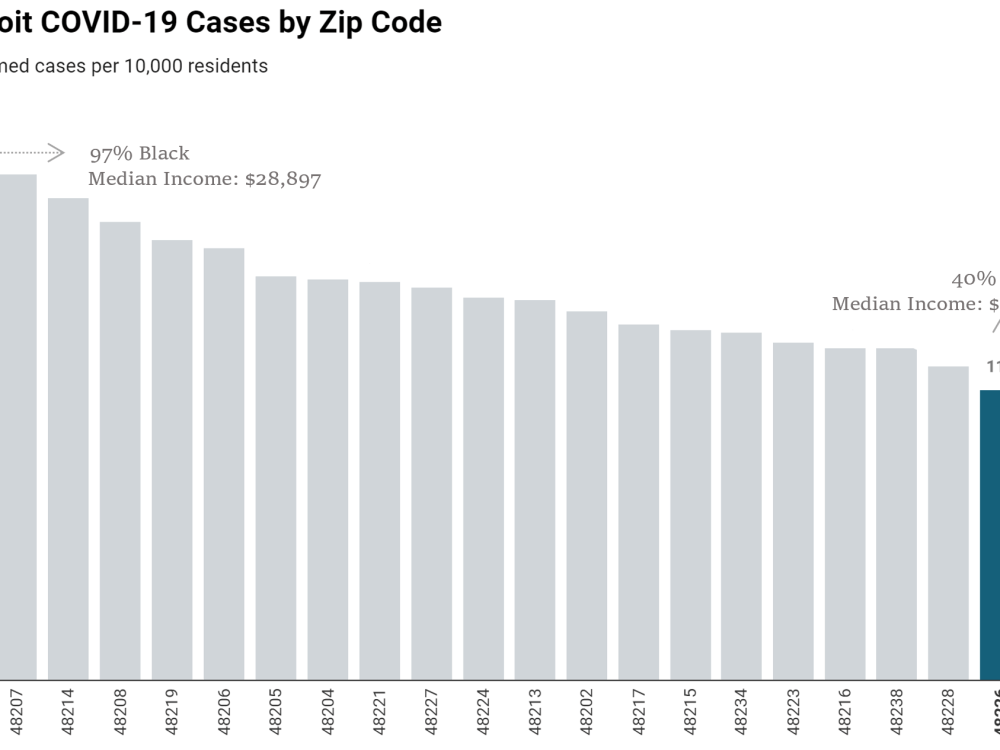 The highest incidence of infected cases is clustered in Detroit’s Black and overwhelmingly poor communities. Those differences can be stark and clear. Take for example zip code 48216, home to the affluent Corktown neighborhood, which has one of the city’s lowest incidence rates. It stands in stark relief to the disturbing reality plaguing a predominantly Black zip code like 48202, where the incidence rate is almost 50% higher. Home of the historic North End neighborhood, zip code 48202 has the city’s highest viral rates: 200 confirmed cases for every 10,000 residents. North End is a predominantly Black and low-income community where local residents regularly struggle with mass water shutoffs owing to overdue bills, even in the midst of the pandemic when public health officials strongly encourage frequent hand-washing and regular cleaning of surfaces to remove viral particles.

In Detroit, multi-dimensional inequality plays a substantial role in shaping both the city’s experience with COVID, and the same horrifying story is playing out in majority Black cities across the country. According to a recent study by the CDC and the Georgia Department of Health, 83.2% of COVID-19 hospitalizations in Georgia were Black patients; though they were not more likely than non-Black patients to die or require mechanical ventilation therapy. While examining issues such as underlying conditions among COVID patients, the report also notes that environmental factors may play a significant role in COVID outcomes. We explore some of those environmental outcomes in this piece.

Social distancing metrics allow us to understand how Black Detroiters have become a population with such an outsized number of COVID-19 infections and deaths. But it is important to note two points from the outset. First, vulnerability to COVID is more complex than simply whether or not an individual social-distances (and we will discuss more of that below). Second, while for some social distancing may be a choice, for many—especially poor Americans and Americans of color—there is no choice. Because of work demands, transportation needs, housing settings, etc., social distancing is not an option.

Our colleague Rashawn Ray eloquently wrote on this blog both about the magnitude of this problem—which has likely only grown worse since his piece—and the types of changes that need to happen to fix the problem. He notes, “structural conditions that inform pre-existing conditions and health disparities are the main culprit for the epidemic within the pandemic which is ravaging Black communities across the U.S.” Those structural conditions involve educational settings, housing, the labor market, and access to quality and affordable healthcare, among dozens of others.

So, what do the data tell us about individuals’ ability to socially distance in Detroit during this pandemic? The charts below show some common trends. First, people’s social-distancing behavior follows some fairly common trends, overall and on a daily basis. Detroiters are generally increasing their rates of social distancing as the pandemic has worn on. Daily fluctuations tend to move in tandem, suggesting that there are common elements that affect black and non-black individuals in similar ways. For instance, weekends tend to increase social distancing among all people. Between March 1st and March  22nd, about one-third of Detroiters were practicing social distancing, with about 30.9% among Blacks and 28.1% among whites. The average difference in social distancing activity between Blacks and non-Blacks was only 2.8%, with Blacks slightly more likely to distance. As the charts below show, as the pandemic progressed all Detroiters began practicing social distancing at higher numbers. However, in time, a significant separation emerged. 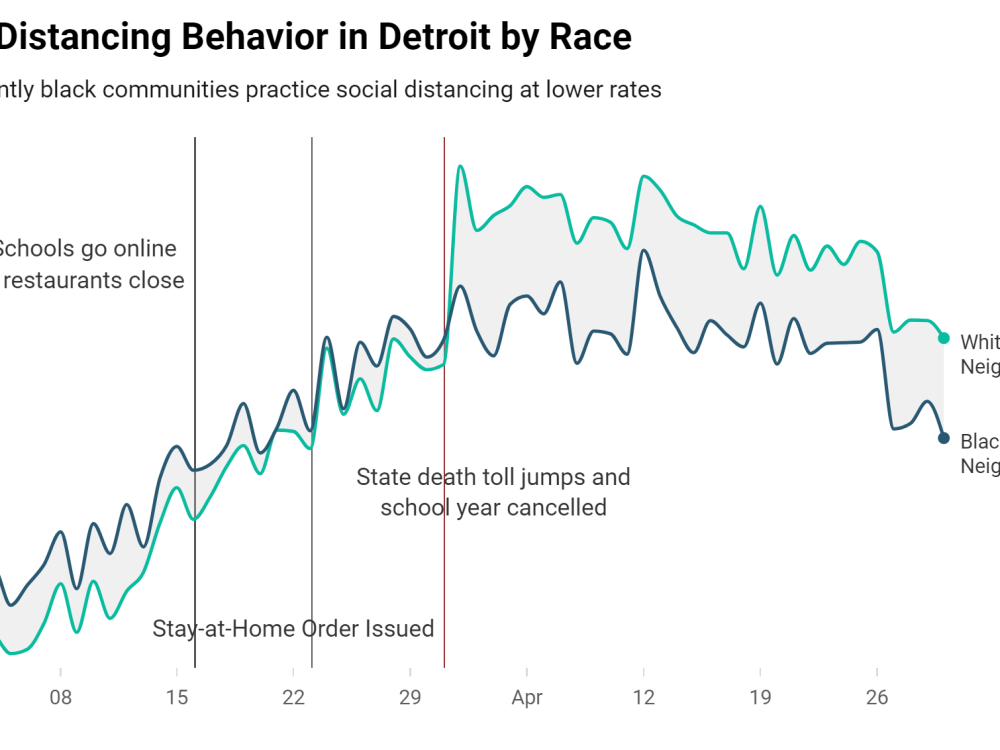 Nearly a week after Governor Gretchen Whitmer’s stay-at-home order, non-Black and high-income communities began practicing social distancing at a statistically significantly higher rate than their Black and low-income neighborhood peers. In fact, on April 1st, the difference between non-Blacks’ social distancing and that of their Black peers was 8%, and since then has averaged 6.6% daily, with non-Blacks more likely to socially distance. On average throughout April, non-Blacks were socially distancing at a rate of 48.3%, while for Blacks that figure was only 41.7%.

Social distancing gaps between neighborhoods widened, even as the number of infections soared. On Friday March 27th the U.S. Surgeon General noted that the Detroit metro area was a “hot spot,” with 83% of the state’s cases occurring in Wayne, Oakland and Macomb counties—counties that make up less than 40% of the state’s population. However, income and race dictated Detroiters’ individual responses to the crisis unfolding in their neighborhoods. By the end of that weekend, non-Black Detroiters began increasing their social distancing, while Black Detroiters’ behaviors largely went unchanged.

Differentiated socioeconomic circumstances and race has further cleaved Detroit into two halves—those who can comply with social distancing ordinances and those whose race and economic situation dictate otherwise. Across Detroit, a dangerous infectious disease is rapidly colliding with race and income inequality, adding bio-insecurity as a new layer of disadvantage to poor Black communities.

While the trends and distributions, at face value, reveal a disturbing link between COVID clusters and the structural intersection of race and socioeconomics, raw correlations do not account for underlying structural differences. Consequently, we implement a series of regression models to test the association between social distancing and the prevalence of the virus within a community. After controlling for structural features such as socioeconomic vulnerability, race, and the proportion of essential workers living in a community, we find clear evidence that neighborhoods with higher shares of Blacks, low-income individuals, and certain essential workers such as law enforcement and personal care workers had higher rates of confirmed cases.[3]

The inability to engage in social distancing is disproportionately higher for certain occupations and the workers who typically fill those positions. For the large contingent of essential foodservice, healthcare support, and retail workers who live in Detroit’s poor neighborhoods, social distancing is an impractical expectation. Some have argued that front-line workers and those deemed essential are due hazard pay because they are doing work that puts them at risk of bodily harm. But in reality—as Ray has acknowledged elsewhere—the risk of bodily harm in this pandemic (and at other times) goes beyond the workplace.

Housing, transportation, and other settings that Black Americans experience differently than other Americans increase their risk significantly. In the absence of a vaccine that provides immunity, these communities are mired in an ongoing cycle of risk and uncertainty. We have a collective, moral obligation to prioritize the health of low-income communities who are sandwiched between two frontlines: working in high-contact workspaces and living in frontline neighborhoods.

It is important to remember, while our analysis centers on Detroit, the problems described here extend to all corners of Black and poor America. These conversations often hide in the shadows from media, policy debates, and governance. However, during a public health emergency and a global pandemic, those disparities that victimize Black and poor America are not just showing up on the front pages of newspapers, they’re becoming most obvious in the obituaries section.

[2] We examine geo-movement behavior of location-enabled devices between March 1st and April 18th to assess the extent to which Detroiters across different neighborhoods are social distancing, measured as the number of devices in the sample observed completely staying at home.

What can be done to protect front-line communities from COVID-19?

John Hudak and Makada Henry-Nickie
Tuesday, May 19, 2020
The Avenue

Why are Blacks dying at higher rates from COVID-19?