The race for the Republican nomination is now in high gear with a crucial debate on Tuesday night and polls showing movement, especially for Senator Ted Cruz who has shot up to give Donald Trump a run for his money in the first caucus contest in Iowa. As the countdown to the February 1st caucuses begins pollsters are trying to figure out who is likely to vote and why. But figuring out how people will vote and why they vote the way they do is never a straightforward, easy task. That’s because voters weigh many different incentives when picking a candidate. When those incentives contradict each other scholars say that the voter is “cross pressured.” For instance, let’s say the voter is a first generation Hispanic and would like to vote for an Hispanic candidate but the Hispanic candidate is too far to the right on issues that the voter cares about. That voter faces a dilemma—vote for the candidate they feel closest to by virtue of ethnicity and background or the candidate they feel closest to on issues.

In primary elections the voters face the usual set of cross-pressures plus an important, additional one—whether or not they think that the candidate they like the most can actually win in a general election. Think of it as a contest between the head and the heart. Many Republican voters are evangelical Christians, Tea Party supporters and very conservative—there’s nothing new about this. And yet, in 2012 they ended up with Mitt Romney, not a torchbearer for any of those factions. Ditto in 2008 when they ended up with John McCain. The same thing happens on the Democratic side as well. The far left candidate hasn’t won the nomination since Senator George McGovern won in 1972—and he lost the general election in a landslide.

The “electability” question is captured in a question frequently asked by pollsters over the years: “Who do you think is best able to beat President Obama [this was the 2012 version] in the general election?” Here’s what we know about primary voters from 2012. Note that in every single contest in 2012 that asked the question, electability emerged as the most important candidate quality by a significant margin. In other words, voters knew that they had to think about this strategically as well as emotionally. Of course electability is like the old saw about beauty—it’s in the eye of the beholder. Ted Cruz and some conservatives argue that Republicans lose when they are “RINOS” (Republicans In Name Only.) And we can expect the candidates to argue their superior electability in the remaining debates. 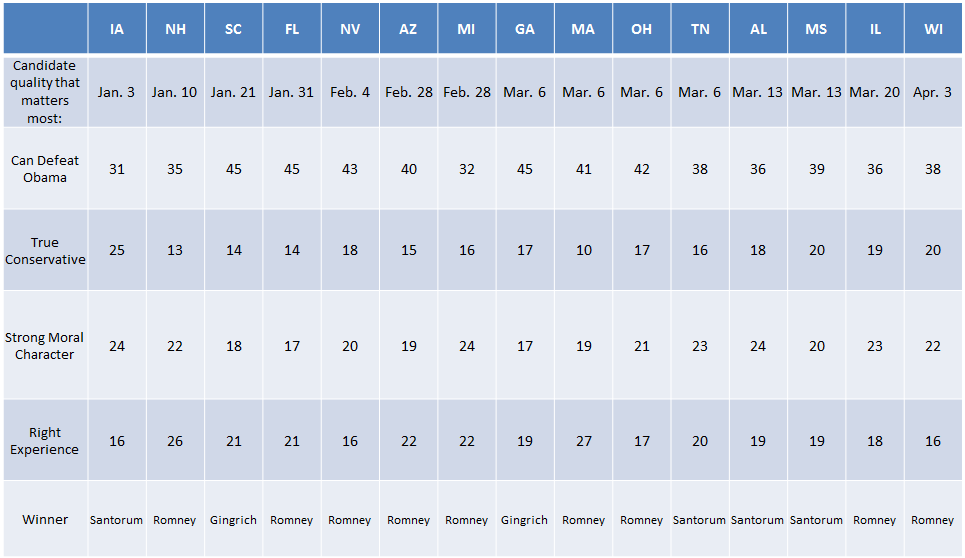 The electability calculation primary voters have to make in presidential primaries differs somewhat from that same calculation in congressional primaries. By and large congressional districts these days are dominated by one party or the other and they sometimes elect far right wing or left wing candidates. That makes sense because primary voters in congressional districts feel free to vote their heart not their head since they know who will win the general election. That’s not as prevalent in presidential primaries where voters know that the general election is likely to be hard fought. Evidence of cross pressures surfaced in two recent polls. As Trump and Cruz became the two frontrunners in the Des Moines Register poll in Iowa, the NBC/Wall Street Journal poll asked voters nationally who they would vote for in a general election. Hillary Clinton beats Trump and Cruz but loses (by a small margin) to Senator Marco Rubio.

Iowa does have a tradition of upending frontrunners. Rick Santorum edged out Mitt Romney there in 2012, Mike Huckabee edged out John McCain in 2008, Bob Dole edged out George H.W. Bush in 1988 and George H.W. Bush edged out Ronald Reagan in 1980. Super religious and conservative voters sometimes vote their hearts—as they did with Santorum and Huckabee. But as time goes and the season unfolds voters will continue to struggle with the question—“Do I vote my heart? Or my head?”