Just as the right wing of the Republican Party has geared itself up to fight “King Obama,” a new book out today offers evidence that the President may not be much of an imperial despot after all.  Pork barrel politics, a common and much maligned feature of Congressional politics, is also a common yet largely un-noticed feature of presidential politics.  This is the central argument of Presidential Pork: White House Influence over the distribution of Federal Grants (Brookings Press, 2014) by John Hudak. Stuck in the middle of Hudak’s book is an intriguing chapter on the first three years of the Obama presidency.  Compared to previous administrations, the Obama administration, at least in its early incarnation, didn’t act in a very political manner.  Hudak tests his presidential pork hypothesis against the gigantic 2009 stimulus bill and finds that “stimulus grant funding to swing states is also statistically indistinguishable from stimulus funding to lost cause states.”  This is a pretty remarkable finding given the rest of the book, which paints the first comprehensive picture of the pork-barrel presidency.

In the book, Hudak uses a combination of quantitative data on the allocation of federal discretionary grants to states from 1996 to 2008 and qualitative data gathered from interviews with federal bureaucrats, federal appointees, and interest group lobbyists who work in the area of federal grants.  He argues that, like members of Congress, presidents are also driven by the desire for re-election, a process that now starts the day after the inauguration.  One of the instruments available to a president in the middle of a perpetual campaign is the distribution of federal grant money.  Each year the federal government disburses an average of nearly 300,000 grants nationwide totaling $75 billion in aid annually.
Looking at the distribution of federal grants over this period Hudak shows that “swing states” (states that could realistically go either way in the upcoming presidential election) receive between 7.3% and 7.6% more grants than do other states.  This is a significant addition to a state’s budget given the large size of federal grant programs.  Using the state of Tennessee as an example, Hudak concludes that “in 2007 Tennessee was a core state [meaning that the Republicans expected to carry it with ease] and received 4,110 federal grants.  These results suggest that if Tennessee had been a swing state it would have received more than 300 additional grants in that year alone.”  Grant allocations also increase as a presidential election nears.  Hudak finds that during the two years prior to a presidential election, the executive branch allocates a significantly higher percentage of grants and grant dollars to swing states.
The existence of “presidential pork” does not mean that presidents sit in the Oval office dispensing funds.  In fact, the mechanisms through which presidents exert influence over the distribution of federal funds are several steps removed from presidents and even their White House staff.  The main mechanism for influence is the existence of political appointees, people who share the President’s policy views and, presumably, his desire for re-election.  To test this hypothesis Hudak uses a measure of “politicization” for agencies consisting of “the ratio of the number of presidential appointees to the number of career-level Senior Executive Service managers within an agency.”  Consistent with his hypotheses, agencies insulated from presidential wishes by having a low number of political appointees are less responsive to a president’s electoral interests.  “Cabinet institutions allocate approximately 28% more grants to swing states than to non-swing states, which translates into a substantial increase in resources for states that are competitive in presidential elections…. Conversely… the most insulated types of institutions, independent commissions, are less responsive to presidential electoral interests. 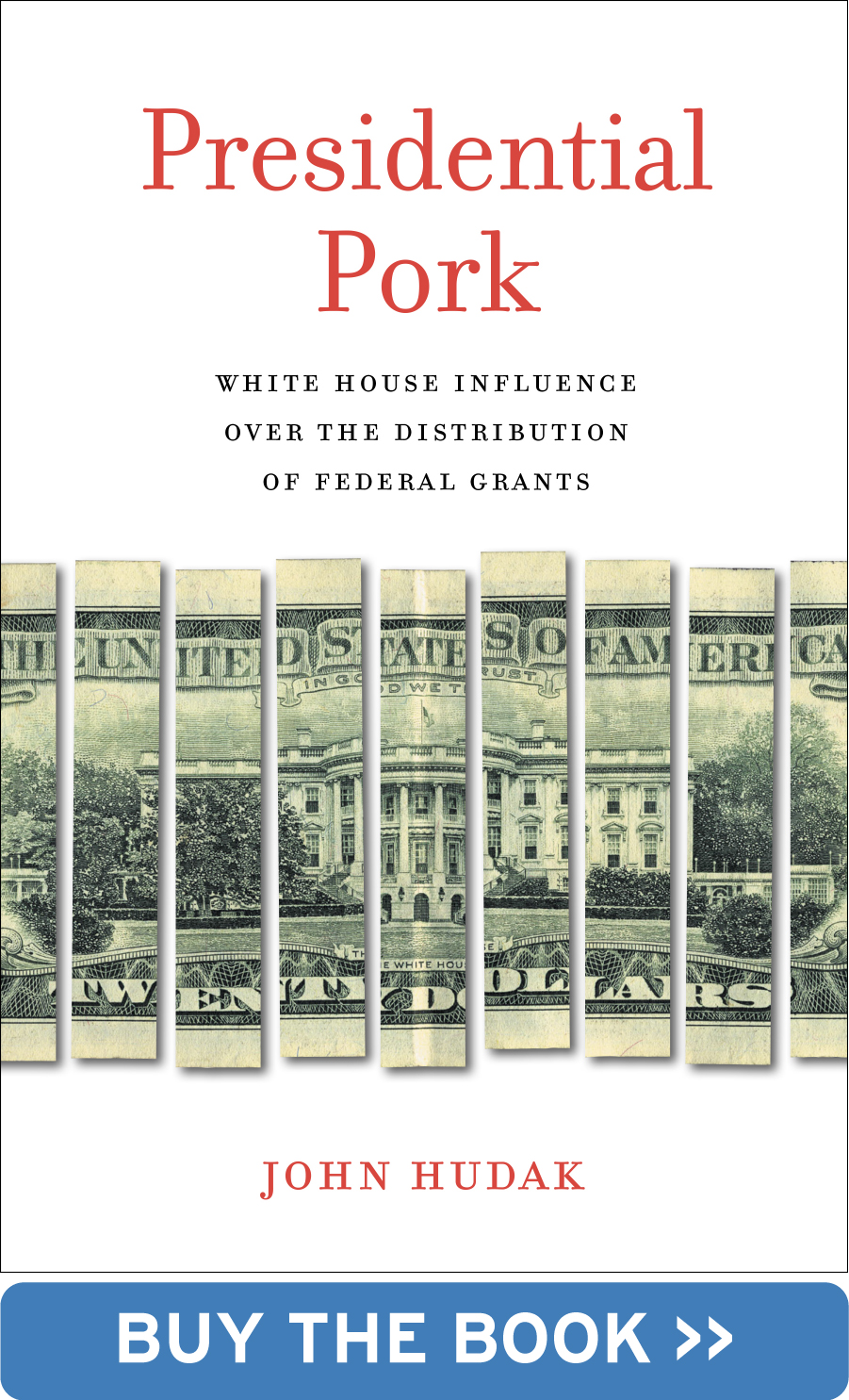 Presidential appointees affect the distribution of money in a variety of subtle ways.  In his interviews with government officials familiar with the federal grants process, Hudak finds that they are often able to incorporate administration priorities into the design of the program and that these priorities can affect the geography of the funding. “The development of formal criteria often is a political process.”  And the formal criteria often exist alongside informal criteria.  Hudak finds that “Appointees are able to adjust scores, rankings and outcomes related to the peer and administrative review processes to advance or hinder certain applicants, thereby allowing presidential preferences to filter down and influence distributional outcomes.”

Evidence of the ways in which previous presidents have used “pork” makes the Obama findings all the more interesting. What can account for this lapse in the exercise of presidential power?  Hudak offers a series of explanations.  In order to make the deals necessary to get the stimulus bill passed in the first place Obama may have done so “at the expense of his own electoral targeting of funds.”  In fact there is an increase in grant funding for powerful senators.  Not only is there no relationship between the distribution of stimulus funds and swing states, there is no relationship between the distribution of non-stimulus grant funds and swing states.  This may be due to the fact that Obama was very slow in filling executive branch agency positions, thus reducing his capacity to make sure that his interests were implemented.  As the election grew near there is some indication that 2011 funds were directed more towards swing states – as Hudak’s theory would suggest.  But data run through the end of 2011 and the book was finished before 2012 data became available.

Presidential Pork offers a fascinating look at past presidents and an intriguing look into the current president.  It is not too early to start asking how history will judge this president.  Is he the power hungry despot that Republicans are demonizing?  Or is he the inept manager Democrats are quietly groaning about  who can’t even use the power of the presidency? Hudak’s sequel to this story should be as interesting as this book.