Many public opinion polls have taken America’s temperature on Obamacare and its components, but few have asked whether government-guaranteed health insurance, as a principle, is a worthy government endeavor. A new survey by the Public Religion Research Institute does just that, and Democrats may find the results troubling.  Many Democratic-leaning groups outside the party’s core are ambivalent about government’s role. Perceptions about the implementation of the Affordable Care Act, which has not gone well so far, could therefore prove critical for the future of the law and for the Party’s electoral prospects in 2014 and beyond. 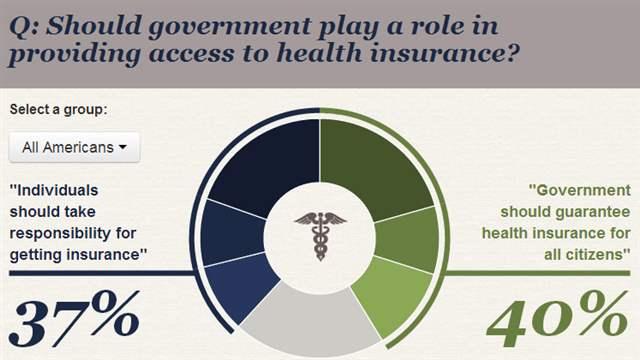 Survey Finds Ambivalence on Obamacare and the Proper Role of Government

The survey offered respondents a scale, at the ends of which were opposing propositions: that government should guarantee health insurance for all citizens; or that individuals should take responsibility for getting insurance. Respondents were asked to locate their preference, from 1 to 7, on this scale.  One through 3 represent support—with diminishing intensity—for a government role; those selecting 5 through 7 endorse—with increasing intensity—the principle of personal responsibility; and  the center of the scale—4—represents undecided or don’t know.

The findings from these data are available in an interactive graphic, and we review the findings below.

Young people are undecided on the issue. They split almost evenly into thirds: 34 percent support a goverment role in guaranteeing health insurance; 32 percent favor individuals taking responsibility for their own coverage; and 31 percent fall directly in the middle, favoring neither proposition over the other.

For these potentially persuadable groups, the implementation of Obamacare will be critical. If people who have voted Democratic in recent elections but who are ambivalent about government-guaranteed health insurance watch the law’s roll-out continue to stumble, they are likely to listen more sympathetically to the calls of ‘I told you so’ from across the aisle.

An interactive graphic of these data is available here.

This series on the PRRI
American Values Survey
is part of an ongoing research collaboration between Brookings’ religion, policy and politics project and Public Religion Research Institute.

McConnell and Schumer ended their standoff over the new Senate. Who won and what happened?

Where next on nuclear arms control?

COVID-19 vaccinations: Why are some states and localities so much more successful?

William A. Galston
Monday, January 25, 2021
Get daily updates from Brookings