Editor’s Note: This blog post is one in a series of posts in which guest bloggers respond to the Brookings paper, “The potential and limitations of impact bonds: Lessons from the first five years of experience worldwide.”

Social impact bonds (SIBs) are one of a number of new “Payment by Results” financing mechanisms available for social services. In a SIB, private investors provide upfront capital for a social service, and government pays investors based on the outcomes of the service. If the intervention does not achieve outcomes, the government does not pay investors at all. The provision of upfront capital differentiates SIBs from other Payment by Results contracts.

Development Impact Bonds (DIBs) are a variation of SIBs, where the outcome funder is a third party, such as a foundation or development assistance agency, rather than the government. To date, 47 SIBs and one DIB have been implemented in the sectors of social welfare (21), employment (17), criminal recidivism (4), education (4), and health (2).

How do SIBs stack up?

In a recent Brookings study, drawing from interviews with stakeholders in each of the 38 SIBs contracted as of March 1, 2015, we evaluate 10 common claims of the impact bond literature to date, so far made up of published thought-pieces and interview-based reports. 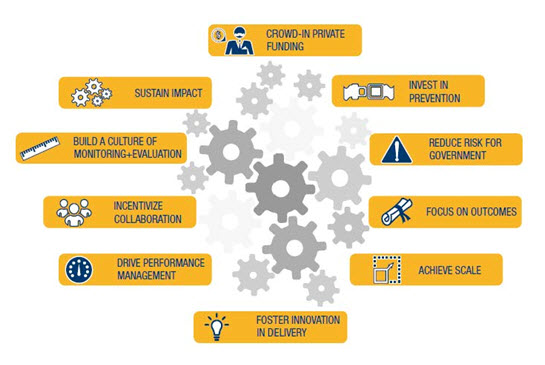 Source:  The Potential and Limitations of Impact Bonds: Lessons Learned from the First Five Years of Experience Worldwide, Brookings Institution, 2015.

Of the 10 common claims about impact bonds, we found five areas where the SIB mechanism had a demonstrable positive effect on service provision:

Where do SIBs currently fall short?

For the five remaining claims about SIBs, we found less evidence of impact.

The optimal financing mechanism for a social service will differ across issue area and local context, and we look forward to conducting more research in the field on the suitable characteristics for each tool.