Preliminary results from a global survey asking people to choose the most important issues for a better world reveals education is at the very top of the list. While the survey’s online response to date has been dominated by respondents from high Human Development Index (HDI) countries, people from over 183 countries – including both low and medium HDI countries – ranked “a good education” as the highest priority, above other issues such as better healthcare, access to clean water and sanitation or better job opportunities. A summary of the findings was presented to the U.N. secretary-general’s High Level Panel last month during their meeting in Monrovia, Liberia. This global My World survey is ongoing, and a second summary of the results will be presented at the next High Level Panel meeting in Bali at the end of March. Ultimately the results will be shared with world leaders in setting the next global development agenda.

But does this global prioritization among citizens guarantee a strong focus on education within the post-2015 development agenda? Not necessarily, since the roadmap to a debate on the agenda in the United Nations General Assembly this September – and beyond that to the eventual agreement on what the agenda will actually include in September 2015 – is much less clear. The United Nations Foundation has produced a useful graphic about this multilayered process: 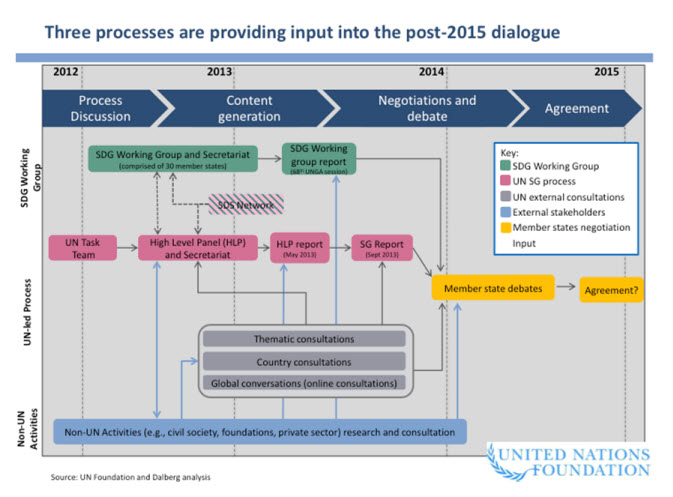 Looking at this graphic, it becomes apparent that the education community must take a two-track strategy for influencing the post-2015 process:

The current discussions within the United Nation’s global thematic consultations on education are an important consensus and community-building process for the education community around an equitable learning agenda. From the position papers released by Save the Children, the Basic Education Coalition, The Global Campaign for Education U.S. Chapter, among others, to the consultative discussions and outputs of the Learning Metrics Task Force, it appears that there is broad agreement that, while there has been significant progress over the last decade in getting more children into school, learning levels remain unacceptably low. Too often children leave both primary and secondary levels without acquiring the basic knowledge, skills and competencies they need to lead productive, healthy lives. It is the acquisition of knowledge and skills that promotes employability, productivity and growth, as well as the noneconomic benefits of education. Therefore there is broad support for a post-2015 education goal that focuses on equitable learning for all children and youth.

This week the last of the four education e-discussions on governance and financing within the consultation process was launched, giving education stakeholders the opportunity to weigh in on the following questions:

Recent research into possible post-2015 frameworks by Anda Adams indicates that it is also vital to ensure the importance of an equitable learning agenda is raised in the more than 50 national and 10 thematic consultations being conducted this year on environmental sustainability, growth and employment, governance, health, inequalities, hunger, food and nutrition security, population dynamics, energy, water, and conflict and fragility. While these consultations cannot perfectly include all voices, the use of social media and web portals are part of a concerted United Nations’ strategy to ensure greater inclusivity, open interaction and information exchange across a wide range of stakeholders, which is a major improvement from the consultation process that preceded the Millennium Development Goals in 2000.

In addition to the online thematic and in-person national consultations, from March 18-19 there will be a Global Leadership Meeting on Education on the post-2015 agenda in Dakar. Convened by UNICEF and UNESCO, the agenda and invitation list for this meeting are not yet public. However, there will be at least 50 high-level participants from governments, major civil society and NGO coalitions and networks, U.N. partners and members of the secretary-general’s High Level Panel (HLP) invited to review development priorities emerging from the HLP and implications for education as well as outcomes of the thematic education consultation. Participants will discuss regional priorities and cross-cutting issues in education and develop recommendations around an education goal, including how progress will be measured. Those who do participate should widely consult with their partners to ensure a multitude of voices are heard and are reflected in the meeting’s outcome document. This document will feed into a final summary report of the education consultations and will eventually influence the High Level Panel’s report and the debate on the post-2015 development agenda at U.N. General Assembly meeting.

As is clear from the United Nations Foundation graphic above, the second track that will be important, and more difficult, to influence is the higher-level, less inclusive processes helmed by member states and eminent persons: the secretary-general’s High Level Panel on the post-2015 development process and the Open Working Group on Sustainable Development Goals (OWG on SDGs, listed as SDG Working Group in the visual above). Furthermore as the ultimate framework for the post-2015 development agenda will not only emerge from the HLP and OWG, but also from the foreign ministers and heads of state taking part in the discussions at the U.N. General Assembly, these high-level politicians are also strategic targets. The education sector doesn’t yet have enough vocal high-level champions of the equitable learning agenda, and this area should be a focus in the coming months. As HLP members prepare to meet in Bali (March 24-27) and in New York (May, dates TBC), and OWG members begin their deliberations, education and development stakeholders should make a concerted effort to utilize connections to high-level decisions-makers within these bodies to brief them on the importance of an equitable learning agenda to poverty eradication and sustainable development.

The importance of education has been made clear throughout numerous post-2015 entry points thus far, from the High Level Panel meeting in Monrovia last month to the global My World survey. But as the consultation process concludes and the High Level Panel hones its recommendations, the urgency to ensure the right education goal is included becomes paramount. The next few months will mark a turning point in the global community’s engagement in the post-2015 process and the outcomes have the potential to make a cataclysmic difference in the lives on hundreds of millions of children.