When I write about teacher pay and teacher work I get a lot of feedback. In particular, I am inundated with two responses presented as arguments about whether teachers deserve higher pay.

So, do the facts support both arguments? No.

In other words, neither strong view has much relation in reality to how many hours teachers put in. Sure, some teachers put in hour after hour after hour. Sure, some teachers manage to get away with hardly working at all. But overall, teachers’ work hours look pretty much like other college graduates’ hours. First let’s go to the evidence, then once we have the answer I’ll argue the question isn’t very helpful.

Measuring hours worked for large groups isn’t easy because if you ask people, they tend to exaggerate the number of hours they put in. The right way to track how people spend their time is to ask them to keep a “time diary,” where every 15 minutes they write down their current activity. Keeping a time diary doesn’t highlight any particular activity, thereby avoiding a good deal of conscious and unconscious bias. Time diaries are believed to lead to pretty accurate reporting. The American Time Use Survey (ATUS) asks thousands of people to keep just such a diary for a 24-hour period. The data collected there lets us compare hours worked by teachers to the hours worked by other college-educated, full-time workers.

Given West’s findings, I’ve believed for some time that the answer to the two arguments above should be both. Average work hours may not be much different but some teachers put in exceptionally long hours, while others really shirk. I was wrong; the answer is neither. Teachers are no more likely to work long hours than those in other occupations and also aren’t more likely to give work short shrift.

I went back to the ATUS (with the help of my research assistant) and, following West’s methodology, drew a newer and somewhat larger sample, all for full-time workers with college degrees. (Following West’s lead, I use the broader ATUS definition of “work related activities” for both teachers and nonteachers.) When it comes to average work during the school year, we found the same substantive answer as West. We found teachers work an average of 42.2 hours a week as compared to nonteachers working 43.2 hours.

Even if average work hours aren’t much different between teachers and others, do we find teachers more than others working unusually long hours while another set of teachers work notably fewer hours? The quick pictorial answer is “no.” Here’s a picture of the distribution of weekly work hours for both teachers and nonteachers. There’s just no important difference between the two groups. 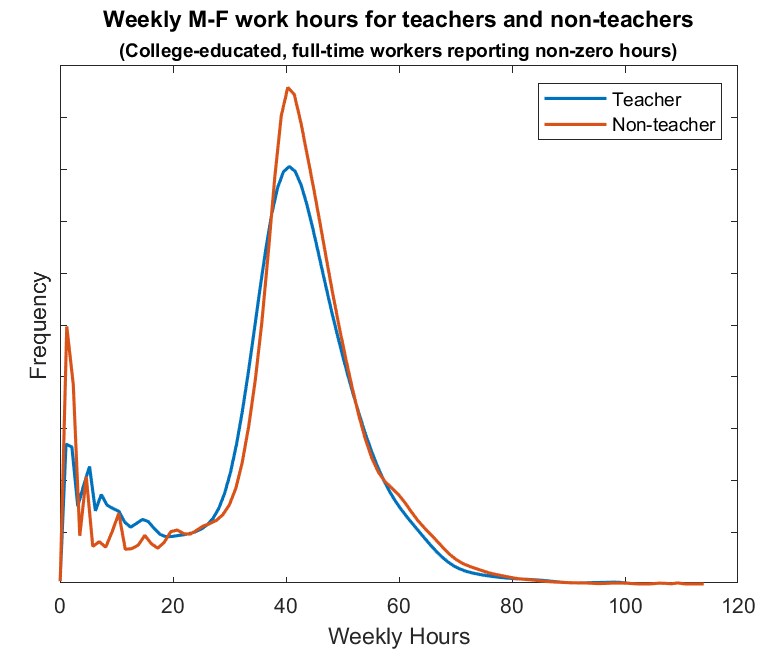 For those who prefer numbers to pictures, we’ve calculated the number of work hours at the low end (10th percentile) and high end (90th percentile) for both groups.

Given that we have an answer to the original question, let me tell you why to an economist the question isn’t all that interesting. Asking about the number of hours a job requires, or necessary degrees, or other sorts of qualifications and abilities of employees is interesting but not dispositive. Some jobs are especially rewarding (say, working with kids); and some jobs are especially stressful (say, working with kids). The bottom line on deciding on compensation is whether you’re paying enough to get a sufficiently large supply of sufficiently good employees. In other words, if you think we have more great teachers than we need you should be okay with lower compensation rates. Contrariwise, if you think we need more great teachers than we have on board then you should want to raise salaries. That’s how a market system works—you get what you pay for.

I am grateful to UCSB undergraduate and Gretler Fellow Israel Chora for research assistance.

Data from the Current Population survey is from IPUMS USA, University of Minnesota, www.ipums.org.