In this edition of Charts of the Week: COVID-19 leads to a rise in food insecurity; disparities between retail companies’ profits and employees’ wages during the pandemic; and Joe Biden’s winning counties represent 70 percent of the U.S. economy.

US FOOD INSECURITY ELEVATES AMID PANDEMIC

Lauren Bauer examines how COVID-19 has increased the number of people experiencing food insecurity. Food insecurity, she writes, is an important indicator of hardship because it “sits at the intersection of the economy and health; it is a measure that a household lacks sufficient resources to provide adequate nutrition to its members.” The chart indicates that food insecurity has risen overall in 2020, disrupting the downward trajectory that had been occurring in the past few years. But it also shows a visible decline at the end of the summer due to federal fiscal stimulus, decreasing unemployment, and the return of some students to schools where they have easier access to school meal programs. “While federal nutrition assistance programs have expanded as families have lost income and through Congressional action,” Bauer explains, “elevated levels of very low food security among children necessitate additional action.” 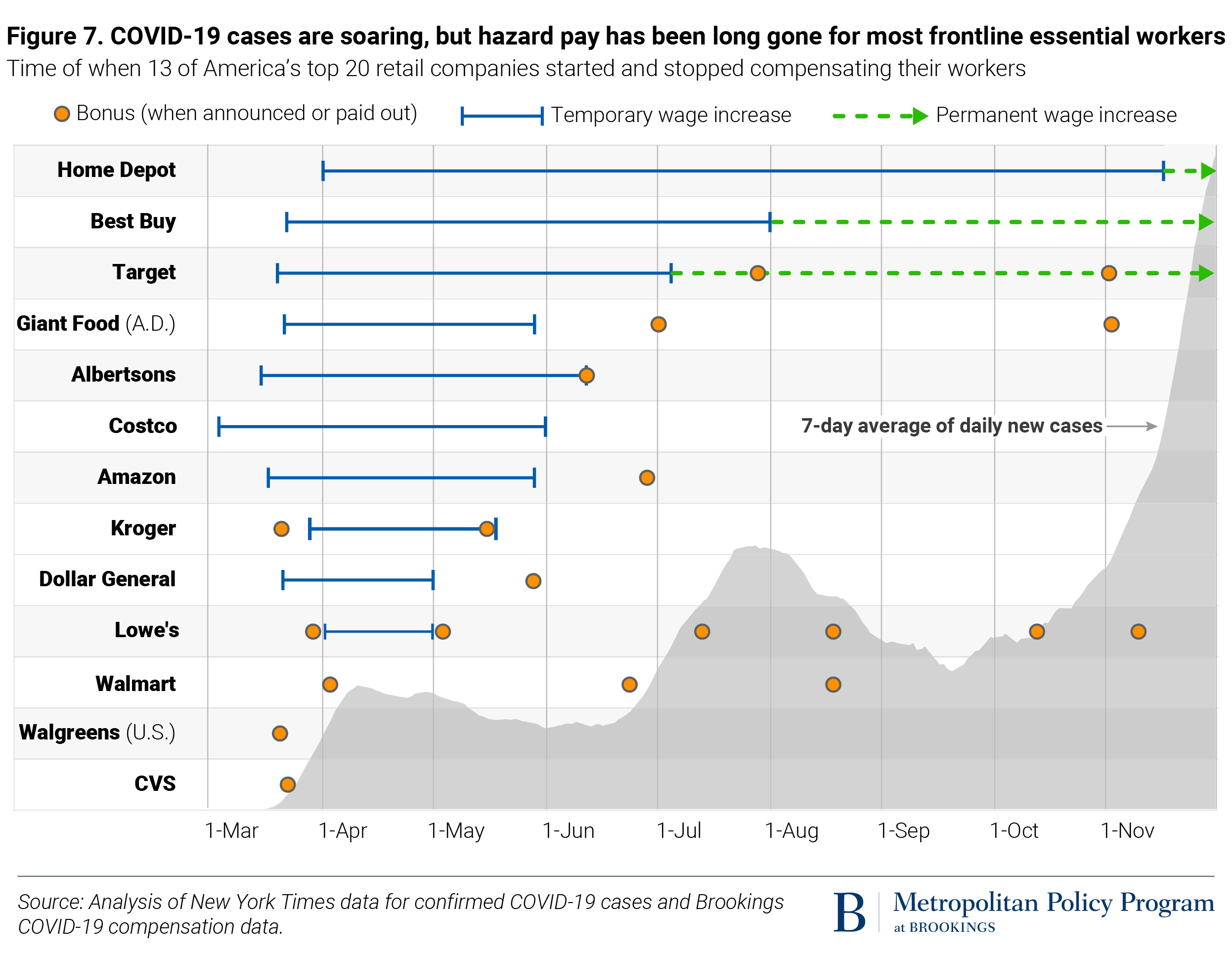 Molly Kinder, Laura Stateler, and Julia Du provide analysis of the large gap between the wealth of employers and the sacrifices of their employees during COVID-19. The top retail companies saw an extra $16.9 billion in profit this year, they note, while frontline workers were given an average increase of $1.11 per hour. The chart shows that nearly every major retailer ended temporary wage increases by June, meaning that hourly pay increases lasted on average just 11 weeks. Only a few major retail companies, including Home Depot, Best Buy, and Target, made wage increases permanent. “Retail workers at large drug store chains have gone the longest (243 days) on average since receiving hazard pay, and received the least amount ($300),” they observe. “Grocery workers follow, with a modest average COVID-19 compensation ($1,175) and more than 140 days on average since hazard pay ended.”

Mark Muro, Eli Byerly Duke, Yang You, and Robert Maxim observe that President-elect Joe Biden’s winning base of 477 counties represents 70 percent of the U.S. economy, while Trump’s losing base of 2,497 counties equals just 29 percent. The chart captures a rigid divide between blue and red America where Democratic counties tend to be large, dense, and metropolitan, they note. In contrast, Republican counties are mostly exurban, small-town, and rural. “Democrats represent voters who overwhelmingly reside in the nation’s diverse economic centers, and thus tend to prioritize housing affordability, an improved social safety net, transportation infrastructure, and racial justice,” they write. “By contrast, Republicans represent an economic base situated in the nation’s struggling small towns and rural areas. … That is not a scenario for economic consensus or achievement.”