With approval ratings of Congress near an all-time low, dizzying chaos in presidential politics, and dysfunction in Washington, it’s tempting to conclude that stabilizing forces are nowhere to be found. However, Brookings Senior Fellow Jonathan Rauch and Raymond La Raja, a political scientist with the University of Massachusetts at Amherst, argue that strengthening state political parties will improve the functioning of the political system. On March 8, the Governance Studies program at Brookings held an event to highlight a recent paper on this topic from the Brookings Center for Effective Public Management by Rauch and La Raja titled, “The state of state parties—and how strengthening them can improve our politics.”

The event featured prominent experts as well as representatives from the Democratic and Republican parties. Elaine Kamarck, a Brookings senior fellow and the founding director of the Center for Effective Public Management, began the event by acknowledging that political parties “have always been the ugly stepchild of American politics,” and while voters say they vote for candidates, not the party, “people, with absolutely amazing regularity, vote for the party.”

Following Kamarck’s introduction, Rauch described the paper’s findings—determined through a survey conducted of all 100 state party committees (of which 56 responded) and comparing the survey results with those taken at the turn of the 21st Century. Rauch explained that state parties are unique and important as political entities and public goods because they help organize and depolarize politics. And yet, state parties are struggling like never before to remain relevant amid the changing political landscape and rise of outside groups. Watch: 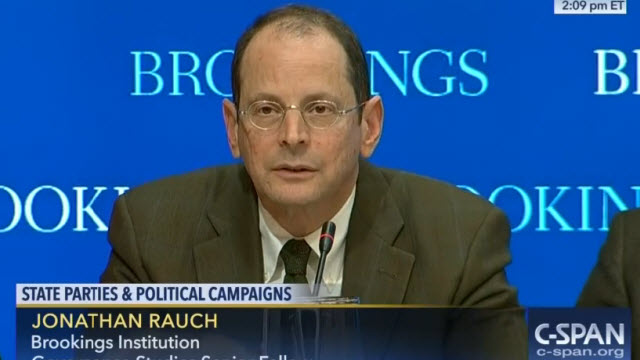 La Raja explained some of the “byzantine” rules state parties face in operating. La Raja points to regulations in McCain-Feingold and other laws, saying, “the rules disadvantage state parties…shackle them from doing what they do best, which is more grassroots engagement.” La Raja also highlights conversations with state party directors who told him that if they told voters to ‘Vote on November 8 at Precinct 12,’ it counts as federal election activity. With that restriction, state party directors leave this information off their mailings and don’t include it in their voter outreach. Instead state parties “stay in their lane” and outside groups pick up the slack, something that is more dangerous than a strong political party. Watch: 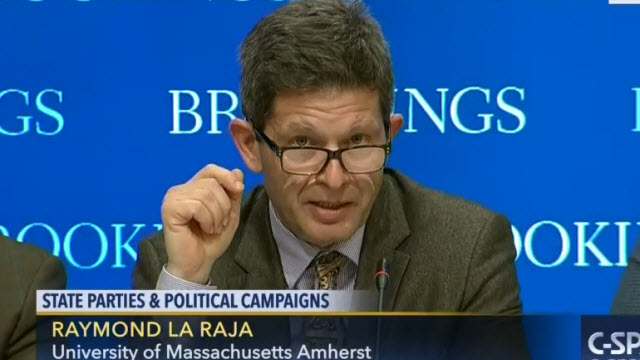 While strengthening state political parties may reduce the influence of outside groups, there are also drawbacks. Eliza Newlin Carney, senior editor of The American Prospect, took a more critical approach to the paper by first reminding listeners about the soft-money influence before McCain-Feingold and then raising several red flags regarding Rauch and La Raja’s solutions. Watch: 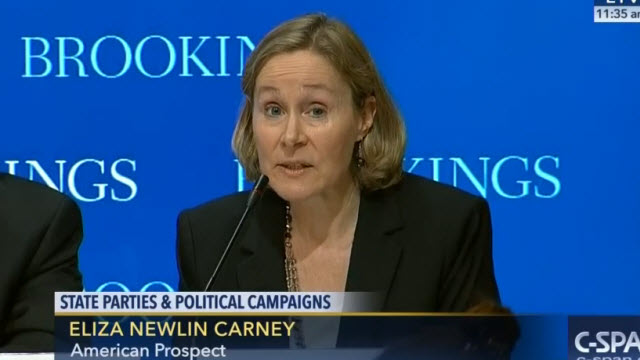 Newlin Carney also found common ground with the rest of the panelists by voicing her support for tax credits, allowing greater coordination between parties and candidates, and narrowing the definition of federal election activity.

Finally Kamarck turned to the audience, where panelists fielded a number of questions about state and national political parties, candidate recruiting processes, and money-in-politics. Jason Perkey, the executive director of the South Carolina Democratic Party, and Eliza Newlin Carney discussed the issues with outside political groups, the contrast between state parties and outside groups, and disclosure requirements. Watch: 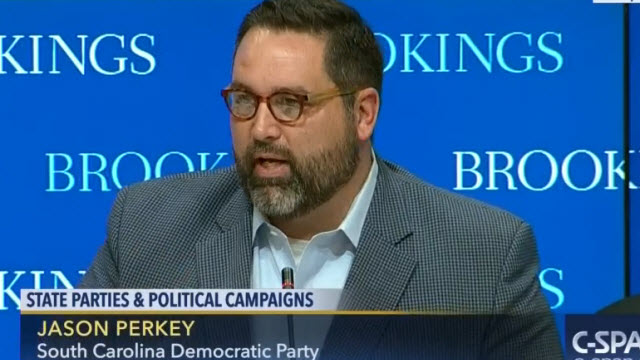 You can get full event video on C-SPAN here, and an event transcript here, which include remarks and commentary from event panelist John Phillippe, chief counsel of the Republican National Committee.

Jonathan Bosworth in the Office of Communications contributed to this post.