Since the late 19th century, American journalists have used their craft to call government and corporations to account for wrongdoing, secret practices, and even corruption, often sparking public outcry and reform. In the latest Brookings Essay, Robert Kaiser, a former reporter and managing editor of The Washington Post, examines the digital revolution that has forever changed American journalism, and not for the better. Calling journalism “the lifeblood of a free, democratic society,” Kaiser recalls a “golden era of journalism” before declining budgets and profits cut into news reporting, including investigative journalism.

Listed here (and in the Essay) are ten noteworthy moments in U.S. investigative journalism. It is neither a top ten list nor a ranking of any sort; many well-qualified media outlets have assembled their own excellent lists. It also focuses on print journalism, though many great episodes of the form have appeared on television. As well, this investigative journalism is but one facet of the vital profession that reports the news. 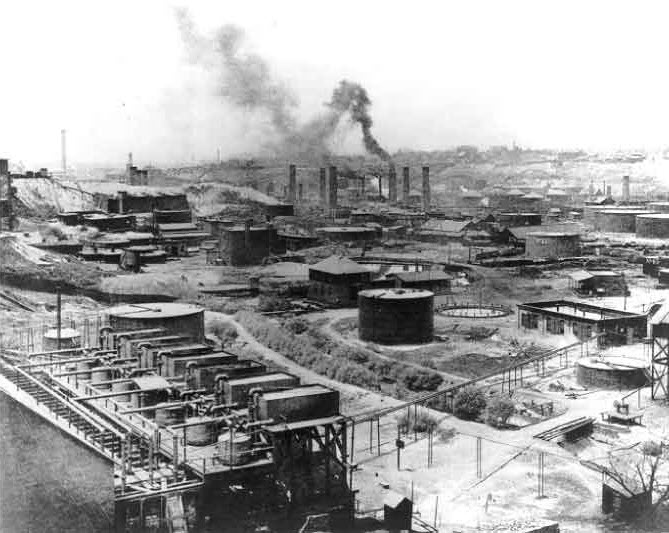 The progressive era of the late 19th and early 20th centuries was a time of social activism as Americans and their president, Theodore Roosevelt, fought corruption and monopolistic practices in government and industry. Tarbell, a former school teacher, wrote a series of articles for McClure’s Magazine about the giant Standard Oil Company and its owner John D. Rockefeller. The series was published in book form in 1904, and in 1911 the U.S. Supreme Court found the company to be in violation of the Sherman Antitrust Act, causing its breakup. Ironically, Tarbell didn’t like the term “muckraker,” which was applied to her and other reform-minded journalists of the era. 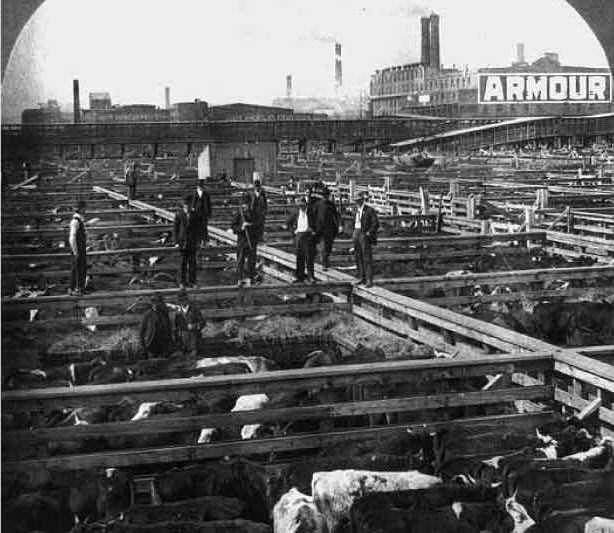 Chicago was America’s center of meat processing and packing around the turn of the century in 1900. Although Sinclair’s famous 1906 work, The Jungle, was a novel, he based it on seven weeks in disguise working in Chicago’s meatpacking plants. His exposé of conditions that immigrant workers faced in the stockyards and the unsanitary practices of the industry coincided with passage of the Pure Food and Drug Act of 1906 and the Federal Meat Inspection Act of 1906. Sinclair later focused on American journalism itself, calling attention in 1920 to the practice of “yellow journalism” in his book The Brass Check. 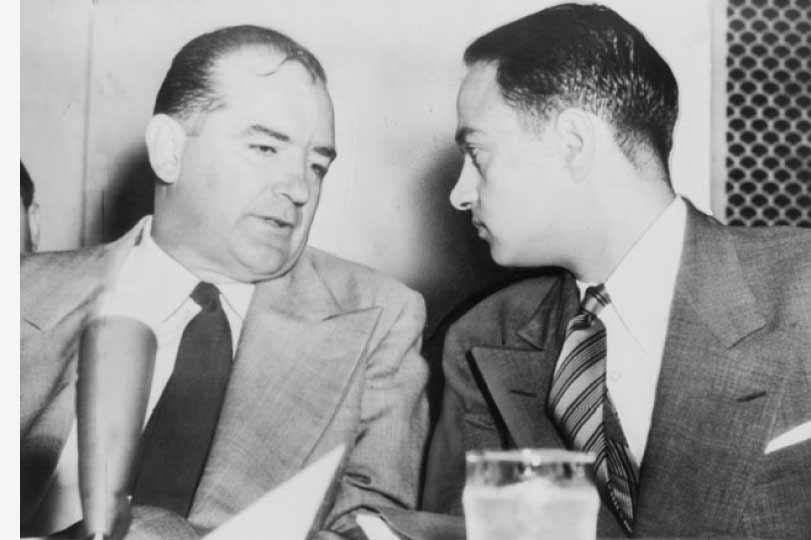 In February 1950, U.S. Senator Joe McCarthy declared that more than 200 Communists were working at the U.S. State Department. After his re-election in 1952, McCarthy conducted a series of hearings on the matter and implicated Army personnel in espionage. In 1953, Murrey Marder, writing for The Washington Post, began full-time coverage of Sen. McCarthy and his hearings. Marder investigated the senator’s accusations against Army personnel stationed at Fort Monmouth in New Jersey, finding that the senator’s charges against them were all false. Marder later opened the London bureau of the The Post and, after his retirement, helped create the Nieman Watchdog Project. 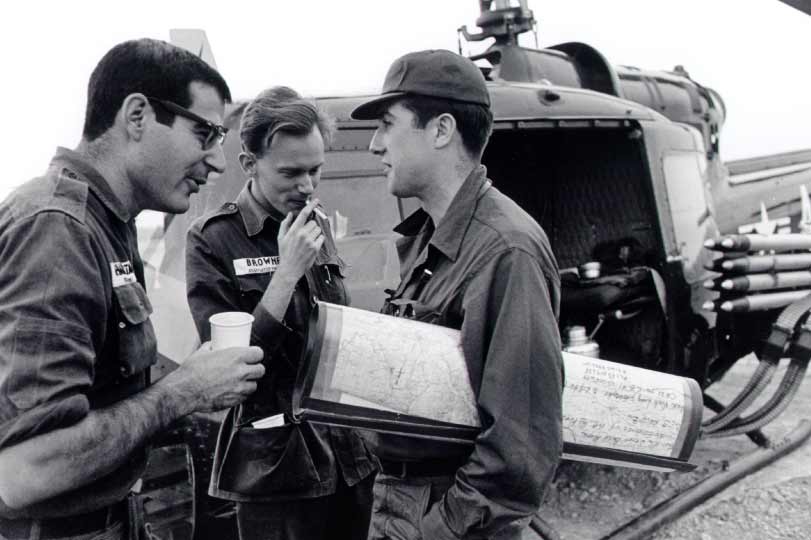 In October 1963, President John F. Kennedy was so upset about David Halberstam’s reporting from Saigon that he asked Arthur Ochs Sulzberger, the publisher of The New York Times, to transfer Halberstam out of Vietnam. Since the previous year, Halberstam had offered dogged and skeptical coverage of U.S. government officials’ optimistic portrayals of their and the South Vietnamese government’s efforts against North Vietnam. “The job of the reporters in Vietnam,” Halberstam wrote in 1965, “was to report the news, whether or not the news was good for America.” In 1964, Halberstam earned a Pulitzer Prize for his Vietnam reporting.

1969: Seymour Hersh exposes the My Lai massacre and cover-up 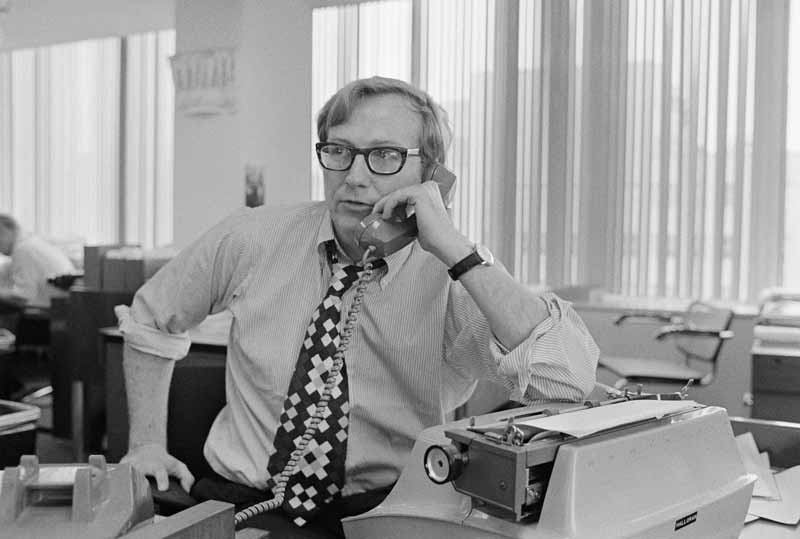 In March 1968, U.S. Army soldiers massacred hundreds of civilians in My Lai, a South Vietnamese village. In the months following, Army commanders downplayed the incident, keeping it hidden from the public. However, due to pressure on the chain-of-command from a soldier in the infantry company involved, Lieutenant William Calley, Jr. was court martialed in September 1969 for his role. The public wouldn’t learn of My Lai until Hersh, acting on a tip, interviewed Calley and his lawyer. Hersh’s story was published by Dispatch, a small news agency with a tiny staff, and then picked up nationally. Calley was the only soldier convicted in relation to the massacre. Hersh won the 1970 Pulitzer Prize for his reporting.

1971: The Pentagon Papers leaked and published 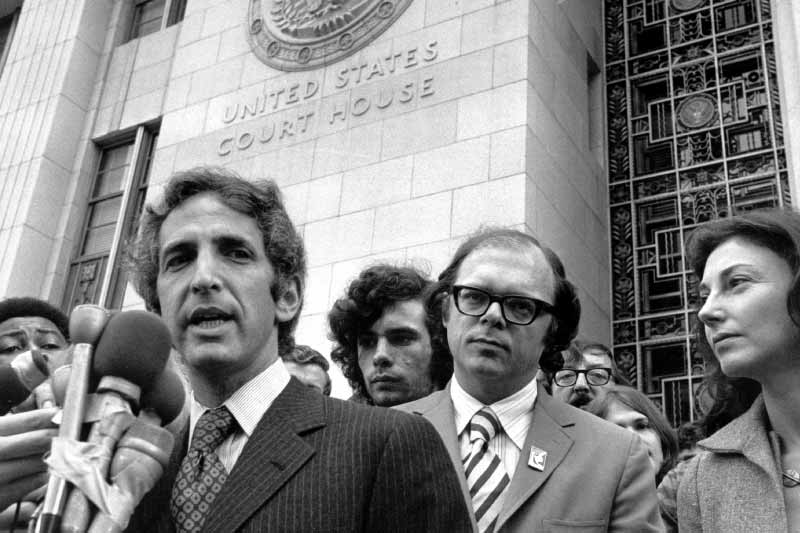 Daniel Ellsberg (l) talks to reporters outside the Federal Building in Los Angeles on Jan. 17, 1973. His co-defendant Anthony Russo is on the right. (AP Photo/stf)

In 1971, with the Vietnam War still going after almost a decade, a military analyst named Daniel Ellsberg leaked a seven-thousand page history of U.S.-Vietnam relations that had been prepared for internal use by the Pentagon. Lengthy sections of these “Pentagon Papers” were published in The Washington Post and The New York Times, revealing the covert origins of a war that was exceedingly unpopular at home. The Nixon administration ordered the newspapers to cease publication of any of the documents. This led to a Supreme Court case (New York Times Co. v. United States) that eventually ruled in favor of the press.

1972: Woodward and Bernstein expose the Watergate break in 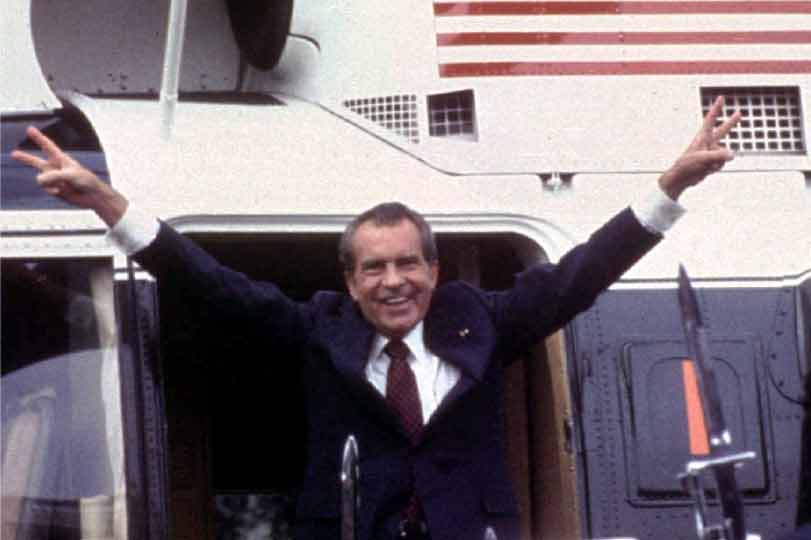 Richard Nixon departs from the White House, August 9, 1974, after resigning the presidency. (Reuters)

In June 1972, five men were arrested for breaking into the Democratic National Committee offices at the Watergate Complex in Washington, DC. Two young reporters at The Washington Post, Bob Woodward and Carl Bernstein, were intrigued that one of the burglars was on the payroll of President Richard Nixon’s reelection committee and began digging further. Woodward and Bernstein uncovered a series of political crimes and “dirty tricks” that connected the burglary back to the White House. Their reporting led to indictments of 40 administration officials and the eventual resignation of President Nixon. The paper won the 1973 Pulitzer Prize for the investigative reporting. 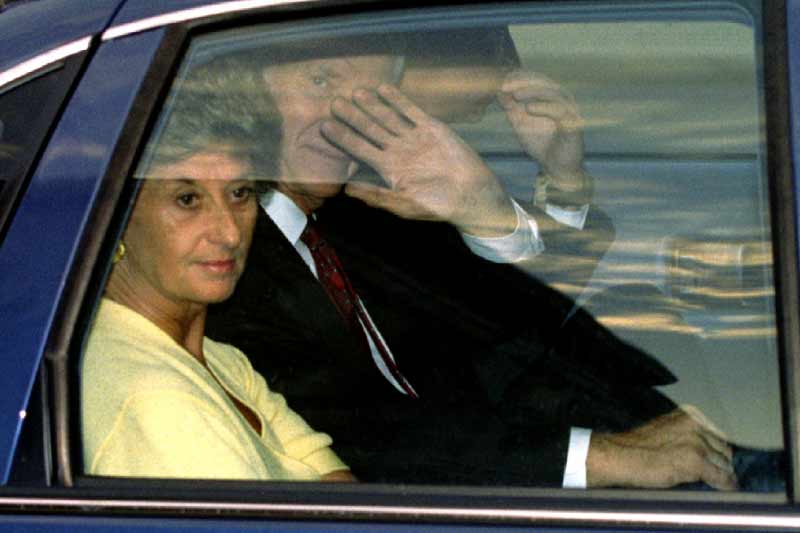 In 1992, shortly after the Anita Hill controversy, Florence Graves, founder of Common Cause magazine, began an investigation into sexual misconduct on Capitol Hill. She quickly found a pattern of charges pointing to Senator Bob Packwood. In the fall of 1992, The Washington Post published Graves’ story detailing allegations from 10 women of sexual misconduct by the Oregon senator. The story not only led to the first-ever Senate Ethics Committee investigation of sexual misconduct and the eventual resignation of Senator Packwood, but also to the passage of the landmark Congressional Accountability Act, subjecting Congress to the same discrimination laws as the rest of the nation. 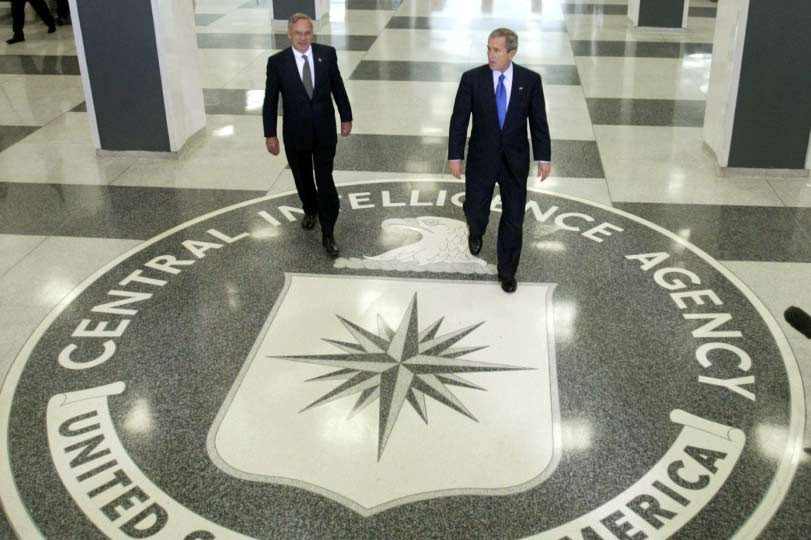 On July 19, 2010, Washington Post reporters Dana Priest and William Arkin published “Top Secret America,” a series of investigative articles revealing the massive and what they characterized as mismanaged post-9/11 growth of the U.S. intelligence community. The series, benefiting from the work of more than a dozen other journalists at The Post, compiled hundreds of thousands of records over two years, identifying 45 government organizations (1,271 sub-units) and 1,931 private companies engaged in top-secret intelligence work. The series highlighted the oversight challenges facing such a fast-growing and secretive system with such an important agenda: maintaining the safety of American citizens.

2013: The Washington Post and The Guardian report on NSA surveillance 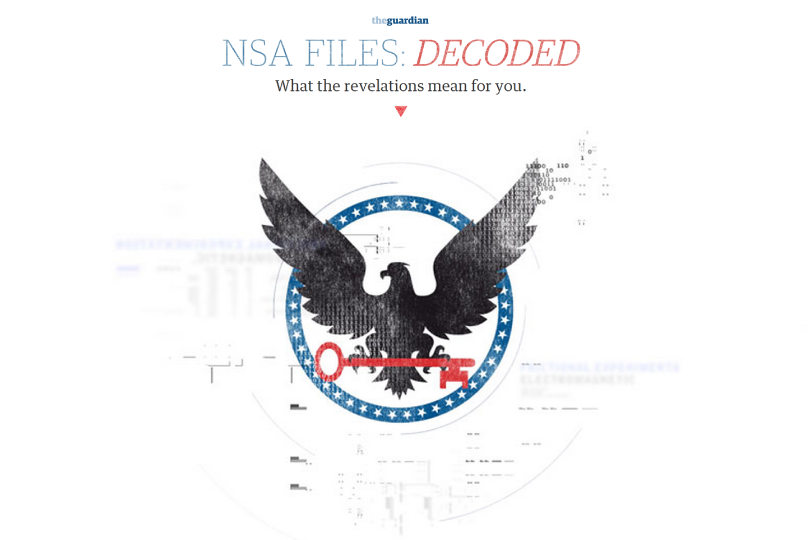 In early June 2013, The Post and The Guardian broke nearly-simultaneous stories about National Security Agency surveillance activities being conducted on U.S. citizens and foreign officials. Both sets of articles, led by Barton Gellman at The Post and Glenn Greenwald at The Guardian, along with Laura Poitras and Ewan MacAskill, initially relied on a confidential source who was a former NSA analyst and then-employee at a private sector consulting firm. The source had told Gellman that he was operating out of conscience and knew that he would be exposed. That person was Edward Snowden. Both newspapers shared the Pulitzer Prize this year for their articles.