“We are at the moment of truth in the future of Afghanistan,” said Bruce Riedel, senior fellow and director of the Brookings Intelligence Project, on The Charlie Rose Show. Riedel continued,

You can’t just walk away from Afghanistan. This is a very dangerous part of the world. It seems to be a place where important things happen. Because not only was it a global changer in terms of the end of the cold war. We can now say 25 years later that it was the start of the global jihad.

Riedel is the author of the new Brookings Institution Press book, What We Won: America’s Secret War in Afghanistan, 1979-89. He suggested to Rose that “we’re on the precipice” in that country because the results of the recent presidential election remain disputed, where “one of the two candidates [either Abdullah Abdullah and Ashraf Ghani] is going to admit that he lost.”

Moreover, Riedel explained that “next year, we’re going to see if the president’s gamble [Obama’s] that we can build an Afghan army good enough that it could contain the Taliban will pay off.” Responding to Rose’s question of why it was so difficult to build an army in Afghanistan, Riedel explained that “this president inherited a disaster” because “for the longest time, no resources went to Afghanistan; they all went to Iraq. When we finally started flowing the resources in 2009 and 2010, we imposed a timeline on how long that was going to be.” Riedel stressed that:

If you wanted to try to take a country like Afghanistan—which in 2002 had known 20 years of war, it had been invaded not by one superpower but by two superpowers, [and] which had been poor to start with—and try to get it back on track, you needed to put in resources. What did we do? We put in roughly 10,000 troops for the next three years. It was like putting a Band-Aid on a sucking chest wound.

Riedel maintained that “all along the way from the day we went into Afghanistan in 2001 we have inflicted damage on ourselves over and over and over again in this war.” When asked if the biggest damage we did to ourselves was Iraq, Riedel responded “absolutely.”

Skeptical of President Obama’s open declarations regarding specific dates of troop withdrawals, Riedel cautioned the president on making his intentions so clear, because “in any war, one of the most important things you want to do is to keep your enemy in doubt as to what your intentions are.” But Riedel also suggested that it is too soon to predict and project policies beyond 2016 and that the U.S. should “wait and see” before committing to a policy that far in the future. 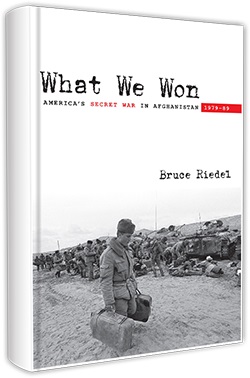 Turning to the subject of his book, Riedel discussed the implications of Pakistani support in Afghanistan. He explained that in the Soviet war, “Jimmy Carter and Ronald Reagan made the same deal with [Pakistani President] Zia al-Haq that Winston Churchill and Franklin Delano Roosevelt made with Joseph Stalin. We needed a bad guy on our side.”

Riedel also appeared recently on the Leonard Lopate Show, where he discussed the 1978 coup that brought the Afghan Communist Party to power. “It was an incredibly factionalized party and unbelievably violent,” Riedel said. He then stressed that “the defeat of the Soviets in Afghanistan was a global game changer. After 40 years, the war in Afghanistan became the final and decisive battle of the Cold war.”

Speaking of the current U.S. withdrawal from Afghanistan, Riedel argued that “we need to get out but carefully. I don’t think we should have any schedule of dates … we need to let the situation on the ground determine exactly how we pull out. Let’s see how the situation develops, let’s not tie ourselves to a timeline.”

Riedel also gave an interesting interview on Stand Up! With Pete Dominick, airing on SiriusXM. He talked (a little bit) about his 30-year CIA career; about the Iraq WMD intelligence; and about his new book.

President Biden, don’t pass up the opportunity for a reset with Shahbaz Sharif’s Pakistan