Nigeria, sub-Saharan Africa’s biggest economy and most populous country, has recorded high growth in recent years. Indeed, real GDP growth rate was 6.31 in 2014 (compared to the regional average of 4.35). Life expectancy has also increased (by 6.9 years since 1980) and so has mean years of schooling (by 0.2 years since 1980). Despite these achievements, like many other African countries, poverty and unemployment rates remain high. In fact, its unemployment rate increased from 23.9 percent in 2011 to 25.1 percent in 2014. So, where are the expected gains in poverty and unemployment from Nigeria’s growth?

It turns out, as Olu Ajakaiye, Afeikhena T. Jerome, David Nabena, and Olufunke A. Alaba find in a recent paper, Understanding the relationship between growth and employment in Nigeria, that Nigeria’s growth has indeed been “jobless.” Not only that, the authors, investigating sectoral growth and employment trends within Nigeria as part of the wider African Lions project, discover that the country’s growth “has been sustained largely by factor reallocations rather than productivity enhancement and that employment elasticity of growth has been positive and quite low, reflecting the country’s poor overall employment generation record, especially in manufacturing.” In short, jobs are not moving to manufacturing and, in general, are not being created fast enough.

Labor in Nigeria moves towards the services sector

Like in many sub-Saharan African countries, the authors point out that labor is leaving the low-productivity agricultural sector for the services sector, unlike the structural transformation trend seen in Asia where labor moves to the high-productivity manufacturing sector instead. As seen in Figure 1, the services sector’s share of the labor force rose dramatically from 2000 to 2014—from 24 to 44 percent. At the same time both agriculture’s and manufacturing’s share of the labor force dropped: agriculture from 51 to 44 percent; manufacturing from 11 to 6 percent. 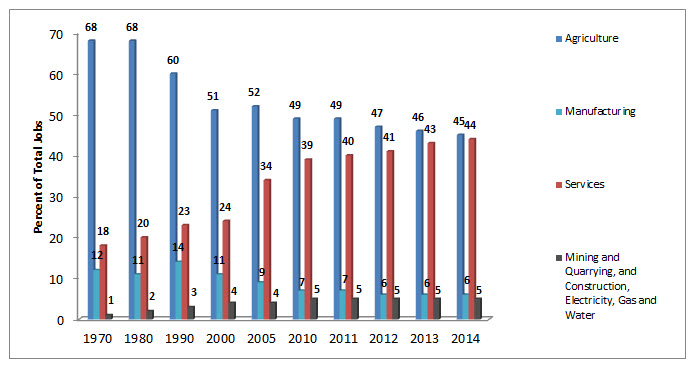 The move to industry, a staple of structural transformation, is not happening and, according to the authors, the industrial sector (which includes manufacturing) is in a “deplorable situation.” Its contribution to GDP has dropped, and its industrial capacity has declined. In fact, the authors note that the country’s “trade composition and pattern are based on primary production, with very little role played in the global value chain.”

But what does Nigeria’s employment landscape look like? From 2010-2014, the labor force (the total number of employed and unemployed persons actively looking for jobs aged 15–64 years) increased by 2.9 percent on average; however, the total employment increased at an average rate of 2 percent over the period compared to 6.1 percent and 16.48 percent for the underemployed (those available for work but did not work for at least 39 hours in the week) and unemployed respectively. Most salient, then, is the rising overall unemployment rate, at 25.1 percent as of 2014 (Figure 2).

Forty-two percent of the population is less than 14 years old, and 29 percent is between 15 and 19 years old, with the median age of 17.9 years, creating a youth bulge. Given the current large youth cohort and the rapidly growing population, youth unemployment is becoming a major concern for policymakers. In 2014, 45.8 percent of youth were unemployed.

If Nigeria can enact effective policies for productive employment creation for the youth, expanding the workforce, it will “provide a significant boost in economic productivity, not only in the production of manufactured goods, services, and agricultural produce, but also in the wake of an increasing purchasing power that fuels economic growth and development.” The authors note that increased investment in education, gender parity, health, and technical expertise will be key in creating this workforce.

Given Nigeria’s high unemployment, slow growth of the labor-intensive industrial sector, and the youth bulge, the authors recommend: