Traditional policy frameworks that rely on monetary, fiscal, and micro-prudential policies failed to contain the risks that led to the global financial crisis. In his now classic 2008 intervention, former U.S. Federal Reserve Chairman Ben Bernanke called for an expansion of the “field of vision” of regulators to incorporate systemic risk, in other words, the risk of disruption to the provision of financial services caused by an impairment of all or parts of the financial system that can have a major impact on the economy. This effort has focused on advanced economies that were at the center of the crisis. However, systemic risk affects all countries. Monitoring, assessing, and mitigating systemic risk in emerging and low-income countries (LICs) can help dampen volatility and promote sustainable financial development in a large part of the world, with substantial concomitant welfare gains.

In a recent paper, “Challenges for Systemic Risk Assessment in Low-Income Countries,”[1] we examine the special economic and financial characteristics of LICs and their implications for systemic risk. Since 26 out of 31 countries classified by the World Bank as LICs are in Africa (if lower-middle-income economies are added, still more than half are in Africa), the topic is especially relevant for this region.

What is special about LIC financial systems?

In recent decades, LICs have participated in financial globalization, as shown by rapidly rising external assets and liabilities (Figure 1). Their financial systems have also deepened, with increasing shares of bank deposits and credit to GDP (Figure 2). Although a very diverse group, most LICs share certain characteristics that affect both the nature of financial risk and the ability of regulators and policy-makers to assess and monitor it. 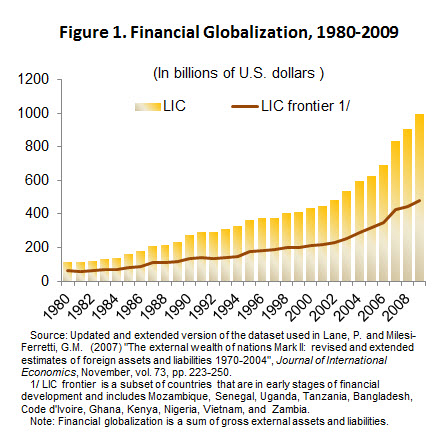 Fourth, the IMF has estimated that the banking sector accounts for over 80 percent of financial system assets in the median LIC. Corporate borrowers—and governments—tend to depend heavily on banks, while banks in LICs have few opportunities to diversify their portfolios.

Fifth, foreign banks are a major presence. Since the mid-1990s, many countries eased the entry of foreign banks, either as subsidiaries or—less commonly—branches (Figure 3). This trend is especially true in sub-Saharan Africa. This has benefits but also generates cross-border contagion risks. 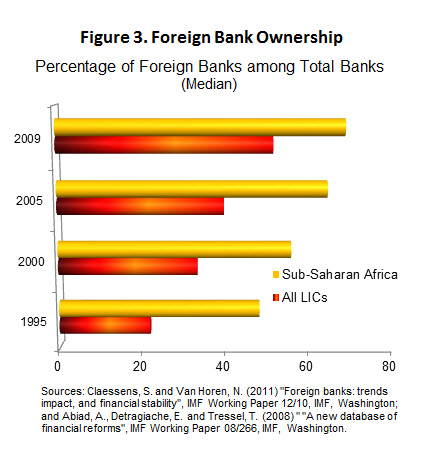 Sixth, financial dollarization is pervasive and results in currency mismatches, either in the banking system itself or among bank borrowers. For borrowers without a natural hedge (e.g., exporters), foreign exchange risk can be destabilizing.

Many of these characteristics are mutually reinforcing. For example, insufficient institutional depth and less effective policy frameworks exacerbate the impact of external shocks on the economy, which, due to credit concentration, translate into the potential for high system-wide bank losses. Insufficient financial depth can contribute to fiscal policy pro-cyclicality because unstable funding for the government reduces its capacity to issue debt and cushion the economy during downturns.

Recommendations for LIC policymakers and supervisors

Given the heterogeneity of LICs, what follows is not a comprehensive policy manual but a menu of options, some of which may be more relevant than others in individual countries.

Focus on the most likely sources of risk. Given the predominance of banks in LIC financial systems, this is where most systemic risk is likely to arise. Rapid bank credit growth episodes are frequent in LICs, and it is more difficult to disentangle healthy financial deepening from unsustainable booms. Also, as a result of less diversification, loan concentration exacerbates credit risk. Therefore, strictly enforcing large exposure limits and related party lending regulations is a crucial supervisory task. At the same time, some risks are less pronounced in many LICs. For example, in contrast to advanced economies, wholesale funding tends to be insignificant for most banks. In addition, because banks in LICs tend to hoard liquidity, liquidity risk through interbank contagion—a major source of concern in advanced economies—tends to be lower.

Keep it simple. The types of financial risks prevalent in LICs can be monitored with a range of analytical tools. Instead of trying to implement the latest models—often with technical assistance from well-meaning donors—policymakers and supervisors in LICs would be better off starting with simple indicators and building expertise over time. This will ensure that the analytical toolkit is commensurate with the existing human resources and implementation capacity.

Watch your perimeter. The extensive presence of microfinance institutions, which generally tend to be much more lightly supervised, is a risk. While these institutions are very small and—individually—not systemic, they collectively represent a large share of intermediation in some LICs.

Build stress testing capability. Implementing stress tests in LICs can be a challenge. Constructing “extreme but plausible” adverse scenarios may be difficult, given the absence of long time series and the frequency of structural breaks in their economic history and the lack of sufficiently granular data. Despite this challenge, stress testing allows regulators an invaluable “peek into the future.” The IMF, among others, has established principles for stress test design and implementation, and a growing body of experience is available globally. LICs should start (or continue) developing simple stress testing frameworks. Once a basic framework is set up, the complexity and sophistication can be gradually enhanced.

Be aware of emerging risks from financial deepening. Sustained financial development is key for long-term economic growth but also creates new risks. For example, financial deepening is often accompanied by large foreign capital inflows into the banking system that can distort interest rates and encourage excessive risk-taking. Supervisors must continuously adapt to understand the evolution of risk taken by banks and facilitate information-sharing through the creation of credit registries or bureaus.

The views expressed here are those of the authors only and should not be attributed to the Brookings Institution, the IMF, its Executive Board, or its management.

Rethinking the constraints to localization of foreign aid

Tracking emissions by country and sector