Promoting intra-regional trade has long been a priority item for African policymakers.  Over time, regional integration arrangements have proliferated all over the continent, often creating a confusing mixture of overlapping, sometimes incompatible, preferential trade regimes.  The Tripartite Free Trade Area (TFTA), which was officially launched on June 10, goes some way towards addressing these issues by bringing together three of Africa’s major regional economic communities—the Southern African Development Community (SADC), the East African Community (EAC), and the Common Market for Eastern and Southern Africa (COMESA).

Over the last few decades, several initiatives to boost intra-regional trade have been undertaken by the three regional economic communities that are now coalescing to form the TFTA. While it is difficult to determine actual impact of those trade expansion efforts on regional trade flows, available data show that merchandise exports among the members of this new FTA have steadily increased from $2.3 billion to $36 billion between 1994 and 2014—more than a 12-fold increase over 20 years. Over that period, the share of intra-regional trade in total exports increased from 7 percent to 25 percent.  While these shares are low compared to European (70 percent) or Asian (50 percent) standards, the trend clearly suggests that trade among the Tripartite members grew faster than their trade with the rest of the world. Regional officials believe that the TFTA could accelerate this trend by further stimulating intra-regional trade. 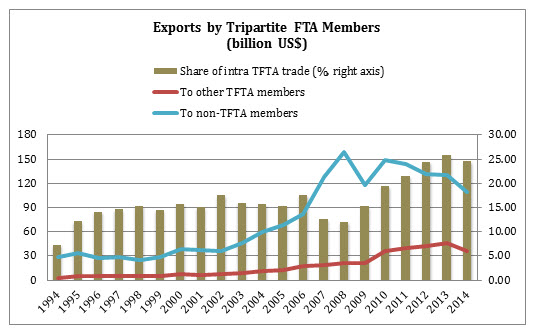 The launch of the TFTA has not received as much media coverage as the ongoing negotiations of the Trans-Pacific Partnership (TPP) and the Transatlantic Trade and Investment Partnership (TTIP). With total merchandise exports by TFTA members adding up to $145 billion (or 1 percent of global exports) and merchandise imports $211 billion (or 1.5 percent of global imports) in 2014, the newly launched free trade area is not considered likely to have any significant effects on the nature of the global trading system, at least in the short run, the way the two partnerships are expected to.

The TFTA is, however, considered by regional policymakers and some analysts to be a big deal and potentially a game changer for the African trading system and the more than a half a billion citizens of the member states. Indeed, the deal is expected to be the launching pad for the establishment of the even more ambitious Continental Free Trade Area that is expected to cover all of Africa. In the process, the launch has demonstrated the possibility of collective action among 26 very heterogeneous nations (e.g., with GDP per capita ranging from the Seychelles’ almost $16,000 to Burundi’s $270) and shows the feasibility of harmonizing three very different preferential trade regimes into one unified scheme.

The new free trade area covers an area of 17.3 million square kilometers (similar to the size of Russia and more than four times the size of the European Union). While this area’s size may present some advantages, its key economic centers are separated by long distances, an obstacle often exacerbated by poor infrastructure, inefficient logistics, and cumbersome customs procedures. To live up to its potential, the Tripartite FTA needs to effectively enhance the connectivity and linkages among member states. This requires not just the elimination of all significant trade barriers, but also by the facilitation of trade through physical and institutional infrastructures.

When fully implemented, the TFTA will create a large market with 626 million customers (about 8 percent of the world’s population) with a rapidly emerging middle class. At the same time, it would also represent a large supply of young, dynamic, and potentially very productive labor force members. If properly harnessed, this abundance of customers and workers could attract substantial amount of domestic and foreign investment, which in turn could boost economic growth, employment creation, and wealth generation across the region.

While the aggregate economic weight of the FTA members, estimated at  $1.2 trillion (similar to the GDP of Mexico), is relatively modest, it is nothing to scoff at.  This is a very dynamic group of countries: Between 2010 and 2013, 14 members grew at average rate of more than 5 percent per year. By fostering economic linkages, and complementarity among its member countries, the TFTA could, in principle, further spread this dynamism; especially if it helps member economies improve their competitiveness and participate in regional and global value chains.

To be sure, there are still a number of outstanding issues (e.g., tariff liberalization schedule, exemptions, trade remedies, and Rules of Origin) that need to be resolved—these may still affect the ability of the FTA to really make a difference. At this point, the FTA only deals with merchandise trade—trade in services and other important issues will be addressed at a later phase.

Even when the negotiations are concluded and all the outstanding issues resolved, the actual implementation of the FTA could still be a difficult, risky, and lengthy process. It will require significant consultations with all relevant stakeholders and real political will from regional and national policymakers. In addition, the agreement needs to be ratified by the national parliaments of the bulk of the member states before it becomes in force. Given its importance, communicating what TFTA is, what it is not, and what its promises are to the general public is crucial as national parliaments move to vote on its ratification.

Will Biden deliver on his commitment to Africa in 2022?

An examination of the 2035 Vision for China-Africa Cooperation