The global jobs challenge is disproportionately an African one. United Nations demographic projections for the period 2015-2030 show that at a regional level, Africa will be a significant driver of future global population growth, and, as a consequence, the working-age population. Therefore, it is critical that we take heed of such projections and fully understand both the challenges and opportunities of Africa’s pending demographic dividend.

Aside from the fast-growing working-age population, Africa’s jobs challenge is complicated by its current labor market landscape: The working poor—defined as those earning less than $2 a day—constitute almost two-thirds of the total employed. (The total employed is made up of individuals involved in wage employment or self-employment.) Therefore, the need to pursue a growth and development path that is sufficiently job creating, while also reducing the number of working poor in Africa, remains central to the pursuit of prosperity on the continent.

The International Labor Organization’s (ILO, 2011) population growth rate projections for the next 15 years make it clear that the working-age population—defined as those aged 15-64—is projected to contract in Europe and grow in single digits for North America (Figure 1). Thus, the growth of the global workforce will be driven by Asia, Latin America and Africa. Of those regions, sub-Saharan Africa is predicted to have the fastest growth. This trajectory translates into a working-age population of 793 million people in 2030—a 70 percent rise from the current 466 million. To get there, the region will add 15.6 million people on average per year through 2020, then 17.2 million per year through 2025, and, finally, 19 million per year through 2030. 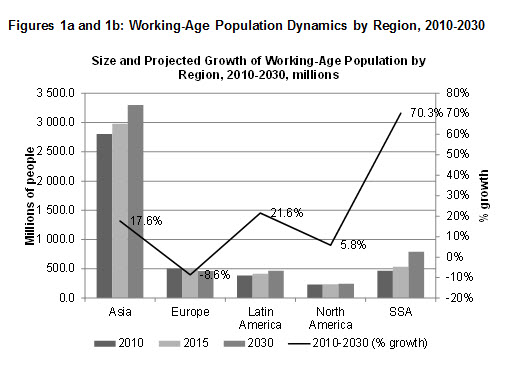 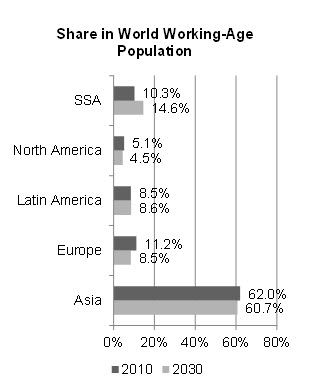 Of the 3 billion people in the global labor force, only half of them are in wage employment—loosely defined as employment in which you earn a wage, either formal (officially recognized contract) or informal (oral/implicit contract). In sub-Saharan Africa, a large majority (74 percent) of the 297 million employed individuals is not in formal wage employment but, rather, is self-employed.[1] This fact means that the incomes of most of the employed in sub-Saharan Africa are directly dependent on the profits of their enterprise, which are typically more variable than income from wage employment. Also unique to the region is that, on average, 56 percent of the labor force work in agriculture, compared to 25 percent of the labor force in other non-OECD countries. This means that 77 percent of the self-employed in sub-Saharan Africa work in agriculture, compared to the corresponding figure of 55 percent for other non-OECD countries.

1. The data is based on the World Bank’s International Income Distribution Database (I2D2) dataset, which is a harmonized set of household and labor force surveys drawn from a multitude of countries.

3. See
Africa’s Jobs Challenge
for the corresponding data for the following regions: East Asia and the Pacific, Europe and Central Asia, Latin America and the Caribbean, Middle East and North Africa, and the Special Administrative Region. Available here:
http://www.dpru.uct.ac.za/pb-1330-africas-jobs-challenge
.

This fact emphasizes the importance of the agricultural sector in the region—and, relatedly, rural livelihood strategies and rural labor markets—when attempting to uncover the complexities of job creation and poverty reduction in most of the developing world. A segmented understanding of an African developing economy labor market necessarily needs to account for informal work, but more particularly, informal agricultural work and associated labor dynamics. Since labor in the region primarily involves activities related to working on land in rural areas (typically low-earning work), employment in the current context (self-employed agricultural work with associated inadequate earnings) will not be sufficient to reduce poverty in the future. For the millions of young people entering the labor force in the next 15 years, the generation of ‘better quality jobs’ (including enhancing agricultural productivity) represents a growth path that is more poverty reducing (in the absence of other redistributive measures such as social transfers).

Data from the ILO (2012) shows that the number of working poor in sub-Saharan Africa not only constitutes almost two-thirds of the total employed, but is also approximately eight times the number of unemployed in the region.[2] Furthermore, strongly linked to the indicator of working poverty is that of vulnerable employment—defined as the sum of own-account workers (those who are self-employed and do not employ workers of their own on a continuous basis) and unpaid family workers. The vulnerable employment indicator provides insights into overall employment quality, as a high value indicates extensive informal work arrangements, often characterized by low earnings and difficult working conditions (ILO, 2012). The region has had a consistently high rate of vulnerable employment over the last decade, ranging between 77 and 81 percent (ILO, 2012). Thus, while the proportion of the working poor has gradually declined since 2000, the fundamental jobs challenge in the region remains the problem of the working poor. This trend highlights the further challenge of not only creating jobs, but improving the quality of jobs and self-employed agricultural work.

Ultimately then, Africa faces the twin challenge of maximizing the pending opportunity of a demographic dividend while simultaneously reducing the number of working poor. The opportunity is that of a new mass consumer market for goods and services on the continent—so heavily touted by the global corporate sector. The challenge, though, is to improve the purchasing power of this new consumer market by pursuing a growth and development plan that is sufficiently job creating and income improving. Over the last decade, the region’s high growth performance has not always resulted in similar achievements in poverty reduction, highlighting the low growth-poverty elasticities across the region. Arguably, the two main drivers of poverty are unemployment and low earnings. So the important task is thus to identify the key drivers of inclusive growth that are critical to alleviating Africa’s twin jobs challenge: creating jobs for a rapidly growing working-age population in the future, and improving the incomes of the currently employed population.

Policies in pursuit of inclusive growth could range from more optimal industrial strategy to productivity-enhancing measures in agriculture, but they should be underpinned by fundamental measures. These include, first, the adequate supply of skilled and well-trained workers, which requires an acute understanding of the skills needed to promote high-growth sectors and thereafter working to develop these capabilities. Second, investment in infrastructure is critical and remains one of the most significant traps for Africa’s sustained economic growth: From transport networks to basic utilities, infrastructure remains of poor quality, under-supplied and relatively more costly than in other developing economies. Third, the building of effective, transparent and accountable institutions is important to ensuring a stable macroeconomic environment and good management of public funds—of particular importance in resource-dependent economies—which are key elements of a successful economy. Finally, it is unlikely that government budgets along with official development assistance are sufficient to close the infrastructure gap at a rapid enough pace, or even make the required investments in the education system. Therefore, developing the ability to effectively harness foreign private capital provides access to an important source of funds for development projects. Continued engagement with an international network of NGOs, governments, private sector actors and civil society groups provides a valuable source of knowledge and experience for African leaders to draw on to pursue these types of inclusive growth policies.

[1] According to the ILO (1993), wage employment refers to jobs “where the incumbents hold explicit (written or oral) or implicit employment contracts which give them a basic remuneration…” in the form of wages. Self-employment is defined as “jobs where the remuneration is directly dependent upon the profits (or the potential for profits) derived from the goods and services produced (where own consumption is considered to be part of profits).”

[2] See Bhorat (2013) for an analysis of the redistribution of the world’s working poor from East Asia and South East Asia and Pacific to South Asia and sub-Saharan Africa.

Do the benefits outweigh the costs of impact bonds?

Decoupling governance and democracy: The challenge of authoritarian development in Southeast Asia