Free college is unlikely to see the light of day in today’s divided political environment, but is frequently in the news as a point of contention between the two leading contenders for the Democratic nomination for president. Bernie Sanders supports eliminating tuition and fees at public colleges, whereas Hillary Clinton favors increases in student aid targeted at low- and middle-income students.

This report provides new evidence on which groups of students are likely to benefit the most from a policy that eliminates tuition and fees at public colleges and universities. Using nationally representative data on in-state students at public institutions, I find that students from higher income families would receive a disproportionate share of the benefits of free college, largely because they tend to attend more expensive institutions.

Under the Sanders free college proposal, families from the top half of the income distribution would receive 24 percent more in dollar value from eliminating tuition than students from the lower half of the income distribution. The non-tuition costs of attending college, including living expenses, are larger than the costs of tuition and fees for most students. Free college, which does not address these expenses, leaves families from the bottom half of the income distribution with nearly $18 billion in annual out-of-pocket college costs that would not be covered by existing federal, state, and institutional grant programs. Devoting new spending to eliminating tuition for all students involves a tradeoff with investing the same funds in targeted grant aid that would cover more of the total costs of attendance for students from less well-off families.

This analysis is meant as a starting point for considering the potential implications of making college free, and does not consider the likely impacts of free college on the enrollment rates of students from different income groups. It also does not consider the distributional implications of the revenue side of the free college proposals, such as Sanders’s proposed tax increase targeted at affluent families. But it highlights the need to carefully consider the tradeoffs between targeted and universal programs aimed at the goal of increasing educational attainment.

Bernie Sanders’s proposal to eliminate tuition and fees at public colleges and universities has gotten a lot of attention as he continues to challenge Hillary Clinton for the Democratic nomination for president. Clinton has criticized Sanders’s plan as a giveaway to the wealthy, arguing that Donald Trump’s kids shouldn’t get a free ride, proposing instead to increase student aid targeted at students from low- and middle-income families.

Is Clinton right that the Sanders proposal would provide substantial benefits to wealthy families? I provide new evidence on this question using the National Postsecondary Student Aid Study, a nationally representative study of U.S. college students last administered in 2011-12. Specifically, I examine whether eliminating tuition and fees for in-state students at public colleges would benefit students from some income groups more than others. My analysis assumes, as Sanders’s plan proposes, that students would keep all existing sources of grant aid (from the institution and the federal and state governments), which they can use to pay for living expenses, books, and other college costs.

The table below shows the results of this analysis. The first row shows that dependent students from the bottom quarter of the national income distribution paid an average tuition of $1,673 at community colleges. This group made up 8 percent of in-state students at public colleges, and paid 4 percent of all tuition dollars at these colleges, or $1.8 billion. Eliminating tuition thus saves this group $1.8 billion in costs, but they would still have to pay an additional $4.5 billion for living expenses and other college costs (after accounting for existing grant aid sources). 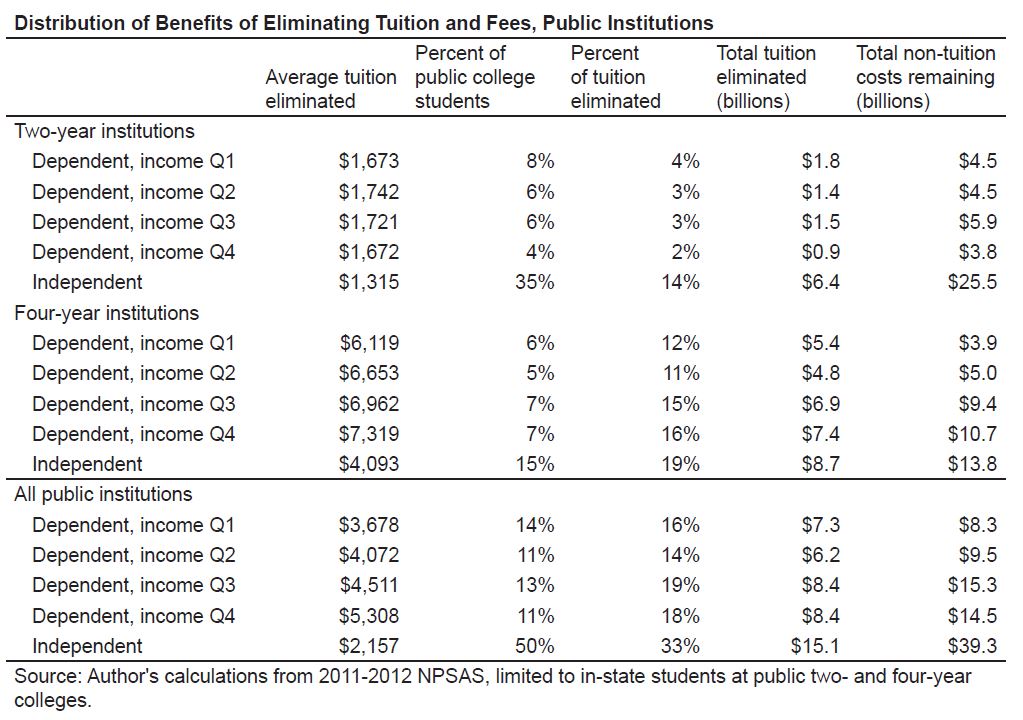 At community colleges, average tuition does not vary much by family income. But at public four-year colleges, dependent students from higher-income families tend to attend more expensive institutions. Students from families in the top income quartile attend colleges that charge about $1,200, or 20 percent, more than the colleges attended by the typical student from the bottom income quartile. Additionally, higher-income students are more likely to attend four-year institutions, and four-year institutions charge more than three times as much as community colleges in tuition and fees.

Do these numbers suggest that Clinton or Sanders is right about free college? Clinton is certainly correct that the Sanders free college proposal gives significant benefits to relatively affluent students. My results indicate that families from the top half of the income distribution with dependent students attending public in-state two- and four-year colleges would receive $16.8 billion in dollar value from eliminating tuition, as compared to $13.5 billion for students from the lower half of the income distribution, a difference of 24 percent. 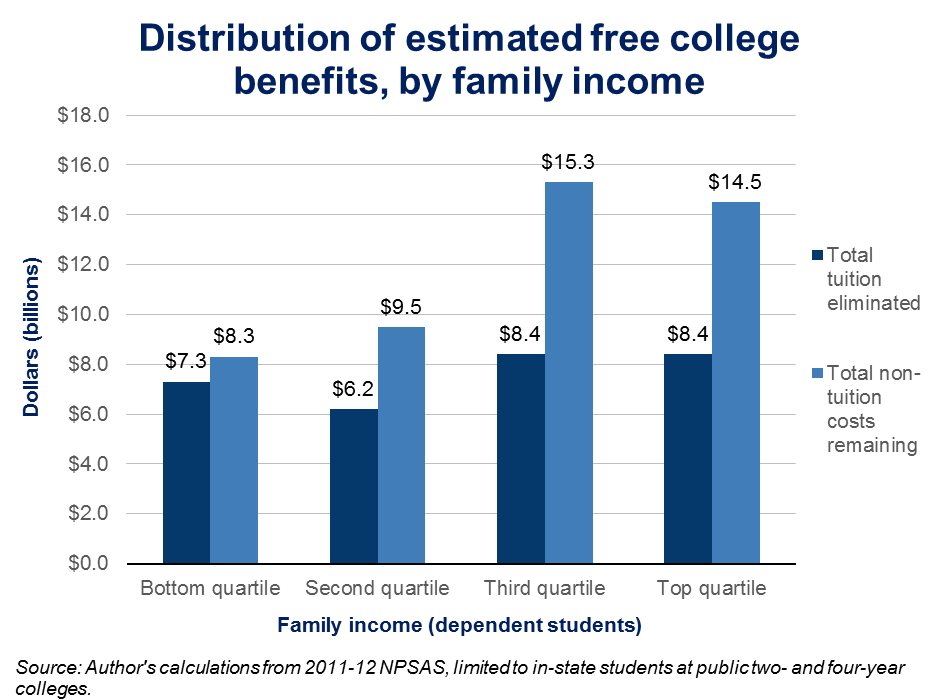 Free college, which does not address the non-tuition costs of attending college, also leaves families from the bottom half of the income distribution with $17.8 billion in annual out-of-pocket college costs that would not be covered by existing federal, state, and institutional grant programs. Devoting new spending to eliminating tuition for all students involves an implicit tradeoff with investing the same funds in targeted grant aid that would cover more of the total costs of attendance for students from lower-income families. For example, the $16.8 billion cost of eliminating tuition costs for the top two income quartiles would be more than enough money to eliminate tuition and cover all other college costs for the bottom income quartile.

The estimated distribution of benefits under the Sanders plan does not appear to be very progressive, but Sanders supporters could make the argument that the benefits that would go to affluent families are a reasonable price to pay for free college for everyone, and may help shore up political support for such a program. They might also emphasize that Sanders has proposed a large tax increase targeted at higher-income families, and argue that affluent families would more than pay for the free college benefits they receive through higher taxes.

It is important to emphasize that this analysis is only a starting point for considering the potential distributional consequences of making college free. The most significant limitation of this analysis is that it does not consider the likely impacts on enrollment of eliminating tuition and fees.[ii] In other words, these projected numbers assume that all students would still enroll at the same institution, and at the same intensity, when tuition and fees are eliminated. In reality, enrollment would likely increase overall, although it is not obvious among which income groups it would increase the most. College enrollment among low-income students might rise relative to other students, but it also might fall if competition for places at public colleges increases as higher-income students shift from the private to the public sector given the change in price.

The debate over free college is more likely to be resolved on political than on empirical grounds, but the ultimate design of proposals to change how students and taxpayers pay for higher education should carefully consider their likely distributional consequences and the tradeoffs between targeted and universal programs.

[ii] Another aspect of the Sanders free college proposal I do not discuss here is its reliance on voluntary participation by states (http://www.urban.org/urban-wire/big-drawback-federal-proposals-make-pre-k-and-college-free).