Obesity is one of the largest health issues facing our country. More than one-third of adults and around one-fifth of teenagers are obese. Childhood obesity is more common among low-income children and those with less-educated parents. In this Long Memo, we examine class gaps in obesity and how they might inform the conversation about economic mobility. What is the relationship between income and weight while growing up, and how does that relationship carry through to adulthood?

THE INVERSE RELATIONSHIP BETWEEN WAGES AND WEIGHT

People earning lower wages are more likely to have higher Body Mass Indices (BMIs) and have an increased chance of being overweight or obese. There are many possible reasons for this. Healthy foods tend to cost more than unhealthy foods. Low income individuals are more likely to live in neighborhoods with less access to grocery stores and/or fresh food. Poverty dense areas also tend to have high levels of sedentariness which has been attributed to the difficulty of exercising outside in areas with higher levels of violence, fewer parks and sports facilities in low income areas, and the high costs of gym memberships.

But the causal relationship runs both ways. Lower wages may make it harder to maintain a healthy weight, but obesity also has a significant negative effect on wages, particularly for white women. For example, multiple studies use time-lagged body weight to account for the reverse causal relationship between wages and weight: like weight as an adult, weight as an adolescent cannot be caused by one’s income later in life. Other studies have used siblings fixed effects to control for socioeconomic and familial variables: one finds that obese workers earn 0.7 to 6.3 percent less than non-obese workers.

There are many possible explanations. Obesity may worsen labor market outcomes due to discrimination on the part of employers. Health problems associated with obesity may result in lower productivity. But it is also possible that the effects of obesity on success start at an earlier age. Obese individuals, for example, have been shown to have lower cognitive and non-cognitive skill formation, due to a combination of discrimination on the parts of teachers, physiological differences that impair cognitive function, and less peer interaction starting at a very early age.

So: low income children are much more likely to be obese, and obesity as a child can hold the child back later in life. Could obesity be an important factor in income persistence between generations – or in other words, for intergenerational mobility? To better understand this issue, we will use data from the National Longitudinal Survey of Youth 1979 (described in further detail at the end of this piece) to answer the following questions: 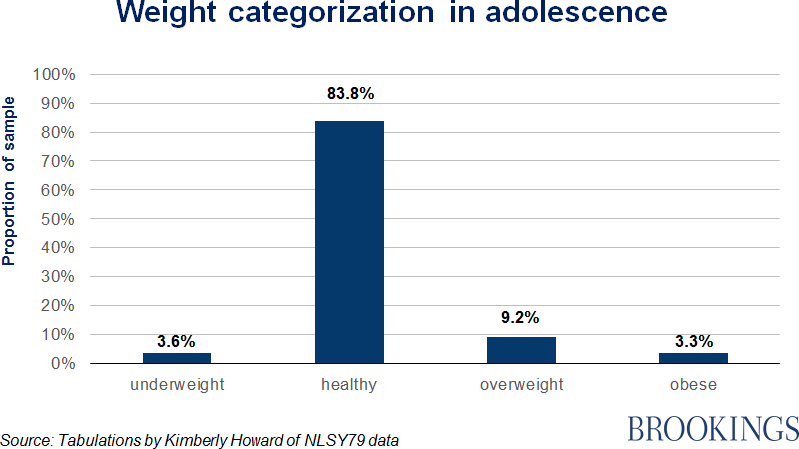 By adulthood, the teenagers in our sample had higher rates of weight problems, with over six-in-ten respondents falling into the overweight or obese categories. 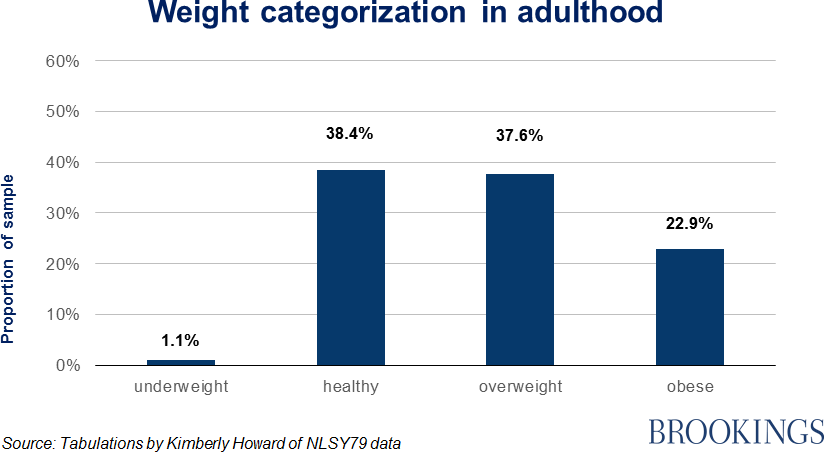 As expected, adolescents in our sample from lower-income homes are more likely to be overweight or obese than those from higher income families: 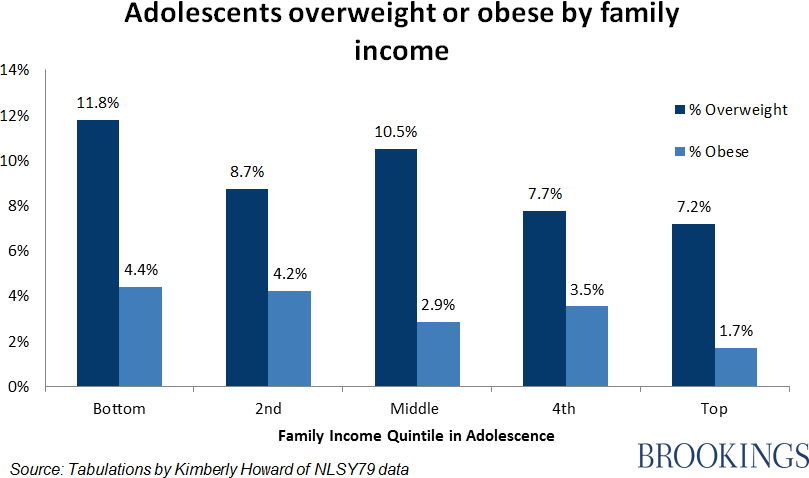 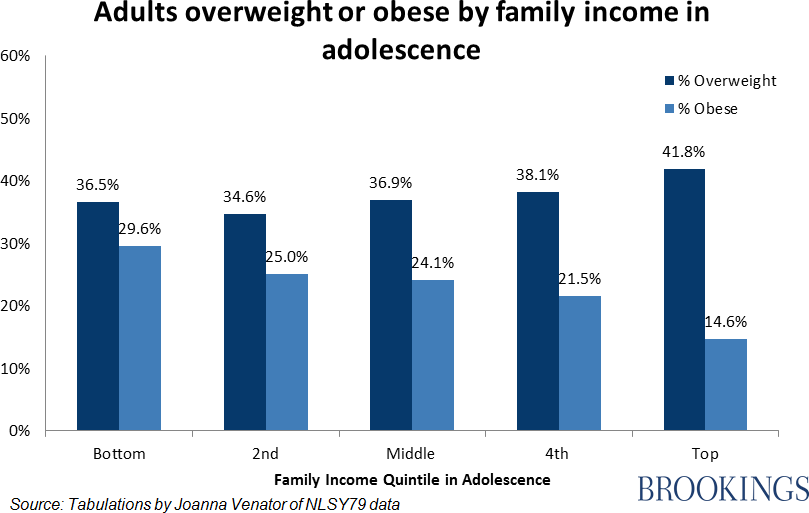 So there is a clear gap in the adult risk of obesity by income status in adolescence. Why this gap exists is a complicated question and our figures  certainly do not indicate that having grown up in a low income family causes obesity. But as previously discussed, having a higher income often makes it easier to access resources, such as healthy food or exercise facilities, that make maintaining a healthy weight easier.

Though we may care about income gaps in weight outcomes for health equity reasons, these gaps are important in the discussion of economic mobility only if a person’s weight predicts their socioeconomic status as adult. To test this, we look at the effects of being obese as an adolescent on the natural log of adult personal earnings.

As discussed previously, using contemporaneous measures of income and weight can be misleading if lower wages influence obesity levels, rather than the other way around. So we use a lagged relationship between weight and income to try to establish the effects of weight on earnings. This is not a perfect measure of causality: it cannot account for a third variable, such as the non-cognitive skill of self-control, which might affect one’s weight level throughout one’s life and also affect one’s productivity or wages. But it does at least account for reverse causality.

The first column of Table 1 shows a regression of logged adult personal earnings on BMI as an adult which shows a significant, though small, negative association between weight and earnings. The second column shows the lagged relationship between weight and earnings: though the statistical relationship is weaker (only significant at a p < 0.06 level), obesity in adolescence is associated with a 17 percent lower earnings level as an adult. 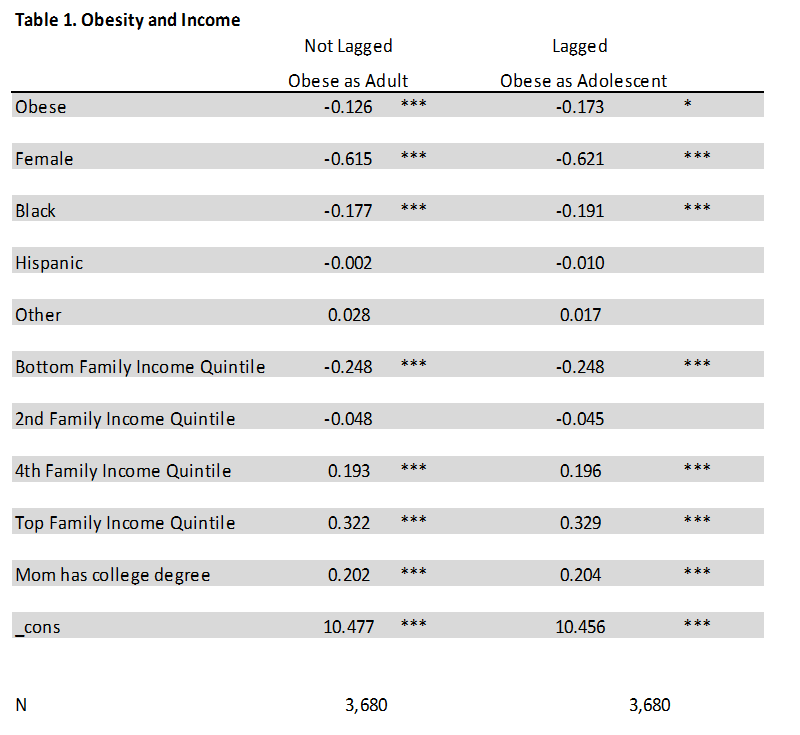 So: family income while growing up is correlated with obesity, and obesity seems to predict lower earnings as an adult. Does it follow that weight can, at least partially, account for the relationship between parents’ income and their child’s income as an adult? To answer this, we use a rank-rank specification similar to the one used by Dahl and DeLeire (2008) and Chetty et al. (2013). Specifically, we regress the adult children’s income percentile on their family’s income percentile when they were in adolescence, controlling for race, gender of the child, and parents’ education.

Table 2 presents our three models. The first column shows a regression of the child’s income ranking on parents’ income ranking for the whole sample, including categorical variables for the child’s weight in adolescence. Obesity is associated with a seven-point drop in rank position on the income distribution as an adult. 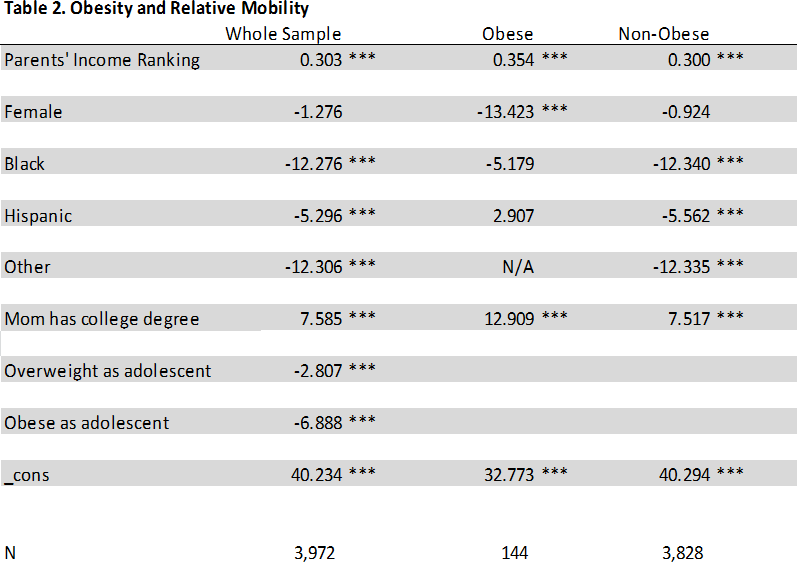 This difference between these two estimates is very small and within the standard of error. This suggests that while childhood income is related to obesity and obesity is related to adult income, obesity’s contributions to income persistence overall is minimal.

THE REAL STORY: INTERACTIONS BETWEEN GENDER AND OBESITY

But there are sharp gender differences here. Overweight/obese adult females have family incomes that are over 13 percentile points lower than overweight/obese men, even after controlling for race, education, and family circumstances. In contrast, the difference in income rank for typical weight women and men is small, and non-significant.

Some of this relationship between gender, obesity, and adult income may stem from gendered differences in how family income growing up affects adolescent weight. For boys, obesity as an adolescent is less strongly associated with family income. In contrast, higher income girls are much less likely to be obese than lower income girls (and less likely to be obese than same income boys): 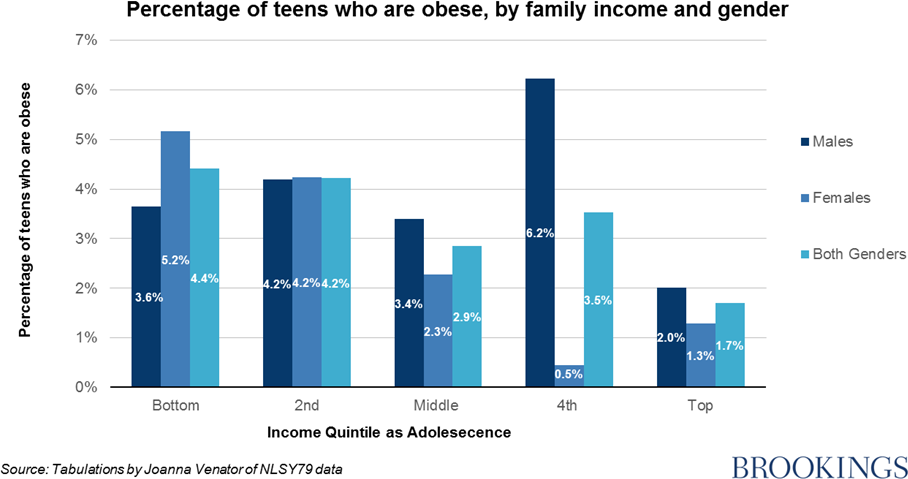 Given differing beauty norms for men and women and the fact that women are more likely to be discriminated against based on weight, it is perhaps unsurprising that women suffer more economically for their weight. But this points to the possibility that income divides in childhood harm women in particular, to the extent that they are related to body weight.

Overall, our study confirms previous findings on the relationship between body weight and lower wages, but suggests that this plays little role in the overall pattern of intergenerational income mobility. The exception seems to be that weight patterns for women as adolescents track more closely with their parents’ incomes, and among obese adults, women face a greater wage penalty. The link between obesity and opportunity seems, then, to be a gendered one.

For our analysis, we use data from the National Longitudinal Survey of Youth 1979 (NLSY79), a nationally representative survey of men and women who were ages 14 to 22 when first surveyed in 1979. We restrict the sample to respondents for whom we can observe family income, height, and weight during adolescence (14 to 17) and individual earnings, family income, educational attainment, height, and weight in middle age (38 to 42). All of our analyses are weighted using NLSY-constructed custom weights.

We calculate adolescent BMI using the height and weight reported in the first year that such data was collected, 1981. Respondents were aged 17 to 25. To calculate BMI, we divide the respondent’s weight by height in inches squared and multiply by 703.Adult BMI is calculated the same way using weight data from 1998, 2000, or 2002 (depending on data availability). Height data is not available for 1998- 2002, but since height does not fluctuate much with age, we can use the reported heights from 2006- 2010 in the calculation.