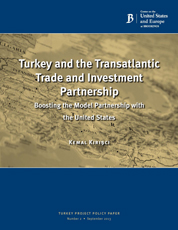 In the second Turkey Project Policy Paper, Kemal Kirişci examines the importance of including Turkey in the Transatlantic Trade and Investment Partnership (TTIP), arging that it could revitalize Turkey’s place in the transatlantic alliance at a time when Turkey’s neighborhood is in turbulence.

Diversifying relations between the United States and Turkey beyond the traditional strategic ones reminiscent of the Cold War era continues to remain a challenge for both nations. At the beginning of his first administration in 2009, President Barack Obama advocated the idea of a “model partnership” to overcome this obstacle. However, giving substance to Obama’s model partnership has become another challenge in itself as both sides have experienced difficulties giving life to this idea beyond a modest expansion in economic relations. This is also complicated by the fact that, after a decade of implementing an energetic foreign policy aimed at achieving greater regional stability through economic integration and the infamous “zero problems” approach, Turkey now finds itself deeply embroiled in Middle Eastern conflicts. This situation is further aggravated by the public protests that broke out during the month of June and the police repression that has, in the eyes of many, undermined Turkey’s internal stability and democratic credentials. These developments risk weakening Turkey’s transatlantic alliance with the U.S. This is happening at a time when the U.S. and the European Union (EU) are trying to strengthen their own partnership and the western liberal economic order as a whole through the Transatlantic Trade and Investment Partnership (TTIP). Involving Turkey in TTIP would give concrete life to the idea of a model partnership and also become a means to reconnect Turkey to the transatlantic alliance. Turkey’s involvement in TTIP would not only benefit the economy but also help consolidate and strengthen Turkey’s democracy through a continued expansion of the principles of accountability, transparency and rule of law. The size of the Turkish economy and its close economic links to its neighborhood would also bring an added value to TTIP.

Besides TTIP, the U.S. is also negotiating the Trans- Pacific Partnership (TPP) with 11 East Asian and  Pacific countries. South Korea will likely join that number soon. Both projects aim to develop and introduce a new set of rules known as WTO-plus standards to govern international economic relations. TTIP and TPP would go well beyond traditional free trade agreements. They would not only aim to eliminate remaining customs duties but also address non-tariff barriers to trade and improve the investment environment. More ambitiously, they aim to introduce a new generation of regulatory standards which would cover a range of issues from the protection of foreign investments and intellectual property to opening up public procurements to international competition. Both projects signal a U.S. policy decision to supplement the traditional WTO-driven multilateral trade talks and to instead also pursue independent negotiations with like minded states. If these talks are indeed successful, they would bring together a group of countries which account for almost two-thirds of the world gross domestic product (GDP) and close to half of world trade totals. Countries left outside TTIP and TPP would either have to accept less favorable access to these markets, or would have to adopt the standards laid down by these two partnerships. Geostrategically, this means that emerging economies such as Brazil, Russia, India, China and South Africa (BRICS), which have traditionally challenged the leadership of the U.S. and have often questioned the Western economic liberal order, would be left at a disadvantage. Ironically, Turkey, a long standing member of this Western- led international economic order, would also be disadvantaged if not included in TTIP.

Turkey has been a long-standing ally of the U.S. and a member of the transatlantic alliance. It has been a loyal member of NATO since 1952 and was a founding member of Western-led economic and political organizations ranging from GATT, the IMF and World Bank to the OECD and Council of Europe. Turkey has had an association agreement with the then-European Economic Community since 1963 and a customs union with the EU in place since 1996. Furthermore, even if sporadically, Turkey is moving forward in negotiations regarding its membership to the EU. Despite a foreign policy that is at times assertive and independentminded, Turkey’s economic ties with its traditional transatlantic allies remain very strong. In 2012, more than 40 percent of Turkey’s foreign trade was with the EU and the U.S.; two-thirds of Turkish capital was invested in the EU and the U.S. In the course of the last decade, the Turkish economy has grown impressively and has become the seventh largest economy in Europe (including Russia), and the 17th largest in the world. In 2012, the economy of Turkey was larger than all its neighbors put together, excluding Iran and Russia, demonstrating its importance for the economies of the region. Furthermore, this economic performance precipitated the expansion of a vibrant middle class which now plays a critical role in Turkey’s democracy.

This economic picture has led the Turkish government and businesses to energetically advocate for Turkey’s inclusion in TTIP. Turkish Prime Minister Recep Tayyip Erdoğan wrote a personal letter on the subject to President Obama and Turkish Minister of Foreign Affairs Ahmet Davutoğlu brought the issue up with Secretary of State John Kerry during the latter’s visit to Turkey in March 2013. A multitude of governmental and civil society actors have also approached their counterparts in the U.S. and the EU for support. However, as the EU and the U.S. held their first round of TTIP negotiations in July 2013, the question of Turkey’s inclusion remains unresolved. What is at stake? Why is Turkey so keen to join TTIP? What has been the response of the U.S. and the EU? What course of action should the U.S. take and what are the challenges and opportunities associated with maintaining a strong transatlantic relationship with Turkey? This paper will argue that the exclusion of Turkey from this new emerging international structure, composed of TPP and TTIP, risks pushing Turkey into the arms of those countries that challenge the Western economic order. It would also be damaging to Turkey’s own economic development and democratization process. Instead, finding a way to include Turkey in TTIP, or alternatively signing a parallel free trade agreement between the U.S. and Turkey, would create a win-win situation for all involved parties: Turkey, the U.S., the EU and even the Middle East.

The paper will address the above questions and thesis in four sections. The first section examines the significance of TPP and TTIP in general, followed by a section that studies the rise of Turkey as a trading state. The third section discusses why TTIP is of particular importance to Turkey and what might be at stake for the U.S. and the EU. The last section considers an array of possible ways in which Turkey could be included into TTIP. The concluding section will stress the geostrategic significance of re-anchoring Turkey into the transatlantic alliance.