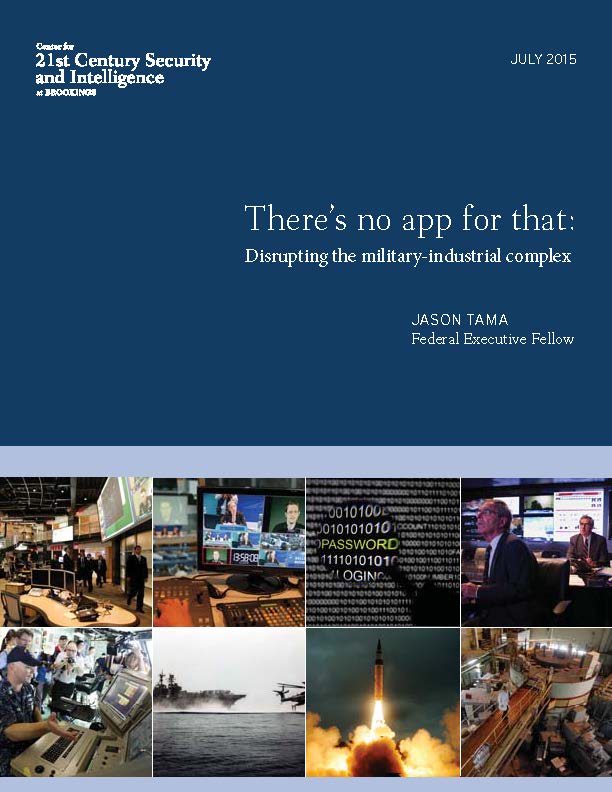 The Digital Revolution is not over. Rapidly emerging technologies continue to disrupt manufacturing and services across global markets. Despite the pace of change, the United States’ military-industrial complex (MIC) remains dominated by a highly consolidated base of “traditional” prime contractors and has proven to be nearly impervious to smaller, and in many cases more agile and more diversified, “non-traditional” companies.

Indeed it is difficult to overstate how formidable the barriers to entry are for “non-traditional” companies in the context of evolving 21st century global markets. These barriers significantly limit the government’s access to human capital, intellectual property, and potentially disruptive innovation in other more agile segments of the economy.

In order to sustain long-term global technological advantage, the future MIC must leverage the full strength and depth of the rapidly evolving U.S. technology sector, particularly in places like Silicon Valley, which by almost all measures remains the world’s leading innovation ecosystem.

Current leadership in both the Pentagon and Congress seem to acknowledge this imperative and have spoken of the need to diversify the MIC with faster-moving, more commercially diversified companies from places like Silicon Valley. Unfortunately, this is easier said than done.

Considering this context, what are the most significant barriers to entry for “non-traditional” companies, and how can they be lowered in order to attract new entrants, increase competition, and help ensure future military technological superiority? How do “non-traditional” companies in Silicon Valley view prospects for doing business with the federal government in defense, and how can this inform efforts inside the beltway to reform defense acquisitions?

While much has been written on the federal government’s attempts to increase competition through acquisition reform, little research has been done to assess this issue from the perspective of Silicon Valley executives and venture capitalists. This paper offers a comprehensive overview of barriers to entry from the perspective of Silicon Valley technology executives and venture capitalists.

Findings suggest Silicon Valley executives see exceptionally high barriers to entry in defense, not because of ideological objections, but rather because of an acquisitions system and culture heavily biased in favor of larger, “traditional” defense contractors. The current system neither works in their favor nor is remotely consistent with the speed and agility these companies need to simultaneously compete in broader and in many cases more liquid global technology markets. Sadly, most executives and venture capitalists interviewed do not see a way to “win” in the current system.

This paper concludes with a number of policy recommendations, including more comprehensive and politically difficult initiatives, as well as those that can be executed by better leveraging existing authorities and capabilities.

Remembering the first ‘space war’: A discussion with Lt. Gen. B. Chance Saltzman