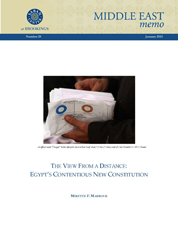 With violent protests following the second anniversary of the Egyptian revolution, and calls for a new unified government amid dire comments about the stability of Egypt, the world’s attention is again on President Morsi and his country. This follows a tumultuous period last month, when Egyptians went to the polls and ratified a new constitution. The document, criticized as hurried, incomplete, and lacking in consensus is enormously contentious.

Mabrouk outlines several ways in which, she argues, the document is shaky on the protection of freedoms and rights, particularly those of women, some religious minorities and minors. Mabrouk also encourages analysts to stop viewing this situation as an Islamist/ secular divide, arguing that idea is too simplistic, and lacks the context for greater understanding of Egypt’s domestic politics.