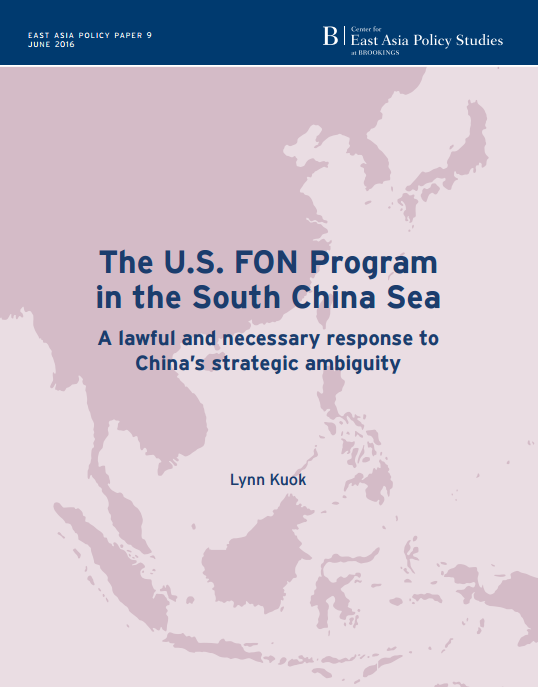 U.S. freedom of navigation (FON) operations have recently come under scrutiny with assertions near contested features in the South China Sea. While some question whether they are necessary, there are strong legal and practical imperatives supporting their conduct. FON operations help to ensure that the hard-earned compromises reached during the Third United Nations Conference on the Law of the Sea (1973-1982) are maintained both by word and deed. The Vienna Convention on the Law of Treaties states that “subsequent practice” shall be taken into account in interpreting treaties. If the United States fails to consistently assert is maritime rights under international law, these might be lost over time. Moreover, as a practical matter, rights not used are of little real value.

FON operations are part of the broader U.S. FON Program, which proceeds on a triple track. Criticism that the United States is prioritizing physical assertions over diplomatic and multilateral efforts is unwarranted. An examination of U.S. responses to three types of excessive maritime claims that are particularly problematic in the region—the insistence on prior authorization or notification for warships to exercise innocent passage, the prohibition of military activities in the EEZ, and the drawing of straight baselines when geographic conditions for doing so are not satisfied—demonstrates that the United States has been meticulous in diplomatically protesting excessive maritime claims and in setting out its (and the majority) interpretation of international law. FON operations assert rights available to all user states and cannot validly be described as a “use of force” or even “militarization”. Rather, such assertions are legitimate exercises of rights vested under international law.

In the South China Sea, FON operations have taken on additional significance given China’s strategic ambiguity. In the past, FON operations were undertaken to challenge excessive maritime claims.  They are now, however, arguably being conducted to pre-empt them—a course of action necessitated by China’s continued refusal to clarify its claims. Such operations may, accordingly, be better framed as assertions of maritime rights (so that these rights are reinforced and not detracted from in the future), rather than as challenges to excessive maritime claims. This recasting is particularly appropriate in the Spratlys where China has been especially vague about its maritime claims.

Effectively employed, FON operations could help counter China’s attempts to assert de facto control over the South China Sea. They will also raise the costs of Beijing declaring straight baselines around the Spratlys and attempting to convert the waters within these lines to internal waters.

The widely anticipated tribunal decision in the Philippines case against China will facilitate the planning, execution and messaging of FON operations by clarifying the status of features. Insofar as the conduct of FON operations is consistent with the tribunal’s award, it will bolster the United States’ ability to argue that its actions are in accordance with international law. Regular assertions of maritime rights in respect of features that are the subject of the tribunal’s decision will give the award teeth and render it more difficult for China to ignore the ruling.

The South China Sea dispute is about much more than mere “rocks”. It concerns maritime rights and the preservation of the system of international law. More broadly, how the United States and China interact in the South China Sea has important implications for their relationship elsewhere and on other issues.

This paper recommends that the United States consider the following:

1.  Continue to regularly assert maritime rights in the South China Sea, including in the Spratlys

2.  Clearly put on record the maritime right the United States is asserting at the time of a FON operation

3.  Publish a consolidated list of all diplomatic protests made in respect of excessive maritime claims

5.  Clarify that the U.S.-China MOU regarding rules of behavior for safety of air and maritime encounters applies to FON operations, and extend the agreement to apply to coastguard

6.  Redouble diplomatic efforts to arrive at a common understanding with China of what constitutes excessive maritime claims

Crime and anti-crime policies in Mexico in 2022: A bleak outlook