As some scholarsi  have pointed out, the popular narrative around crushing student debt burdens is inconsistent with the reality for most borrowers.  In 2010, 13 percent of households making payments on student loan debt had a balance of more than $50,000 and only three percent had a balance of over $100,000.ii  As these figures suggest, the unfortunate cases of households saddled with astronomical debts are rare.  As a result of the disproportionate media coverage of borrowers in dire circumstance, we know relatively little about the experiences of typical borrowers.  In this post I’ll try to fill that knowledge gap by providing some data that describe the financial condition of more typical borrowers.

The following data are based on an analysis of the 2010 Survey of Consumer Finances, a nationally representative survey administered by the Federal Reserve Board.  The sample used for this analysis was restricted to the set of households that were making payment on their student loan debts and earning at least some wage income.iii  The survey includes a representative sample of all U.S. households, so the outstanding student loan debt balance at the time of the survey reflects various points during the repayment period (in contrast to surveys which capture total debt incurred).

Table 1. Distribution of Debt and Income among Households with Outstanding Student Loan Debt

Note: Sample is restricted to households making positive monthly payments on student loan debt and with annual wage earnings of at least $1,000.

It is useful to consider the scale of these payments in the context of other household expenses.  The figure below plots the mean monthly student loan payment against the average monthly expenditure in each major consumption category.  These data come from the 2012 Consumer Expenditure Survey, which is administered by the Bureau of Labor Statistics.  The largest categories of monthly consumption expenditure are housing ($1,407), transportation ($750) and food ($588).  Monthly student loan payments are relatively small compared to these expenses, and are closer in scale to monthly spending on entertainment ($217), apparel ($145) and health care ($296). 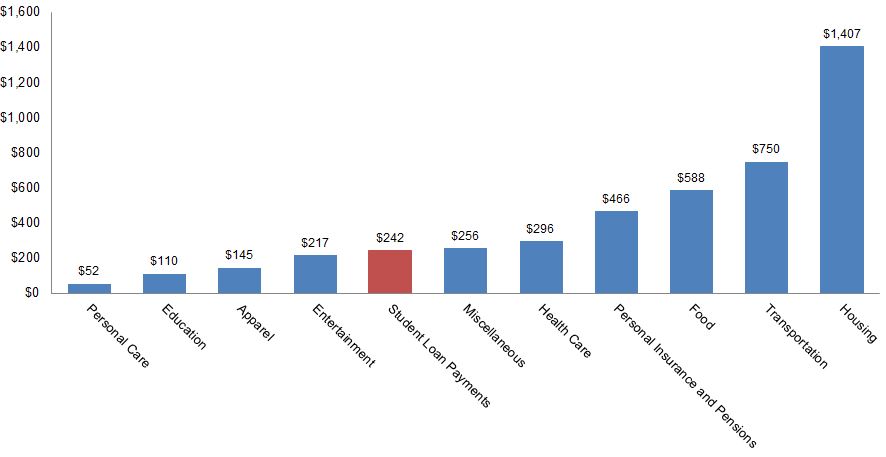 It is not a surprise to see that monthly student loan payments make up a modest fraction of the household budget for most borrowers, but with the proliferation of articles detailing the plight of distressed borrowers, it’s easy to forget what the circumstances of average borrowers are like.  One reason to emphasize this point is that many recent policy proposals have made the implicit assumption that the dire circumstances are widespread among borrowers.  For instance, Senator Warren’s proposal to refinance all outstanding student loan debt would have delivered benefits to households without much regard for demonstrated need.  As policy makers think about designing programs to help the minority of borrowers facing dire circumstances, they should recognize that identifying borrowers in need of assistance will be an important part of the solution.

iii. Households with less than $1,000 in wage income not included in the analysis.