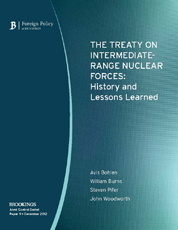 The Treaty on Intermediate-Range Nuclear Forces (INF) represented a milestone for arms control. Signed by Ronald Reagan and Mikhail Gorbachev in December 1987, it was the first treaty between Washington and Moscow to go beyond just limiting the level of nuclear weapons to require significant reductions. The treaty mandated the elimination of the entire class of U.S. and Soviet land-based missiles with ranges between 500 and 5,500 kilometers as well as the elimination of their associated launchers. By the end of the reductions period in June 1991, the United States and Soviet Union had destroyed a total of 2,692 ballistic and cruise missiles, under some of the most far-reaching and intrusive verification measures ever incorporated in an arms control agreement.

The new Brookings Arms Control Series paper, The Treaty on Intermediate-Range Nuclear Forces: History and Lessons Learned, was written by four co-authors, Avis Bohlen, William Burns, Steven Pifer and John Woodworth, who were directly involved in the INF negotiations. The paper recounts the background to the talks and the history of the negotiating process. It explains the key factors that, after the Soviet walk-out in 1983, made it possible for the sides to return to the bargaining table in 1985 and reach a landmark agreement two years later. The paper describes developments regarding the treaty over the past 20 years. It concludes with a discussion of lessons learned that might be applied in future nuclear arms control negotiations, particularly at a time when the United States and NATO are considering possible arms control measures regarding non-strategic nuclear weapons.