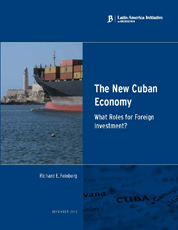 The Cuban revolution defined itself in large measure in terms of what it was not: not a dependency of the United States; not a dominion governed by global corporations; not a liberal, market-driven economy. As the guerrilla army made its triumphal entry into Havana and the infant revolution shifted leftward, a hallmark of its anti-imperialist ethos became the loudly proclaimed nationalizations of the U.S.-based firms that had controlled many key sectors of the Cuban economy, including hotels and gambling casinos, public utilities, oil refineries, and the rich sugar mills. In the strategic conflict with the United States, the “historic enemy,” the revolution consolidated its power through the excision of the U.S. economic presence.

For revolutionary Cuba, foreign investment has been about more than dollars and cents. It’s about cultural identity and national sovereignty. It’s also about a model of socialist planning, a hybrid of Marxist-Leninism and Fidelismo, which has jealously guarded its domination over all aspects of the economy. During its five decades of rule, the regime’s political and social goals always dominated economic policy; security of the revolution trumped productivity.

Fidel Castro’s brand of anti-capitalism included a strong dose of anti-globalization. For many years, El Comandante en Jefe hosted a large international conference on globalization where he would lecture thousands of delegates with his denunciations of the many evils of multinational firms that spread brutal exploitation and dehumanizing inequality around the world.

Not surprisingly, Cuba has received remarkably small inflows of foreign investment, even taking into account the size of its economy. In the 21st century, the globe is awash in transborder investments by corporations, large and small. Many developing countries, other than those damaged by severe civil conflicts, receive shares that significantly bolster their growth prospects. The expansion of foreign direct investment (FDI) into developing countries is one of the great stories of recent decades, rising from $14 billion in 1985 to $617 billion in 2010.1 While FDI2 cannot substitute for domestic savings and investment, it can add significantly to domestic efforts and significantly speed growth.

Today’s ailing Cuban economy, whose 11.2 million people yield the modest GNP reported officially at $64 billion3 (and possibly much less at realistic exchange rates), badly need additional external cooperation—notwithstanding heavily-subsidized oil imports from Venezuela. As with any economy, domestic choices made at home and by Cubans will largely determine the country’s fate. Yet, as Cubans have been well aware since the arrival of Christopher Columbus, the encroaching international economy matters greatly; it can be a source of not only harsh punishments but also great benefits. In the Brookings Institution monograph Reaching Out: Cuba’s New Economy and the International Response, I explored the modest contributions already being made by certain bilateral and regional cooperation agencies and the larger potential benefits awaiting Cuba if it joins the core global and regional financial institutions— namely the International Monetary Fund, the World Bank, the Inter-American Development Bank, and the Andean Development Corporation. This sequel explores the contributions that private foreign investments have been making, and could make on a much greater scale, to propel Cuba onto a more prosperous and sustainable growth path.