The mission of the Federal Pell Grant Program is to deliver financial assistance to low-income students in order to encourage them to enroll in post-secondary education when they wouldn’t have otherwise.  Aid is distributed according to a formula that takes into account the students’ ability to pay; including family income and accumulated assets. In contrast, State aid is often awarded based on academic merit.  According to the National Association of State Student Aid and Grant programs as much at thirty percent[i] of state aid is awarded on the basis of achievement rather than financial need.  Over the past decade this fraction has been increasing slowly, reflecting growing emphasis on merit based financial aid.  The differences in the state and federal student aid strategies are apparent in the resulting distribution of grant aid by household income. 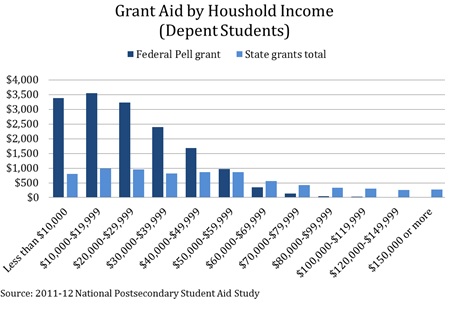 Students in low-income households receive the largest Pell grant awards.  This can be seen in the figure above which reports the average Pell grant awards received by students in different income groups.  The average Pell grant awards for students from households earning less than $30,000 per year amount to somewhere between $3,000 and $3,500[ii].  However, once household income rises above $60,000, the award falls to below $500.  State grants, on average, are far less progressive.  Unlike Pell grants, the average state grant award declines only slightly as household income increases.  Among students from the lowest income households, with annual earnings below $30,000, less than thirty percent receive state grant aid compared with eighty percent who receive a Pell grant.  High income households also benefit generously from state grants, with close to ten percent of students with household incomes over $100,000 receiving grant aid.  Less than one percent of students in this group also receive Pell grants.  So, what gives?  Why do State and Federal grant programs, which presumably have similar objectives, allocate aid so differently?

It turns out that states do in fact have different objectives than the federal government when it comes to student aid.  In addition to ensuring that low-income students have access to higher education, states also have an interest in affecting the enrollment decisions of high achieving students (regardless of their financial circumstances).  Merit aid is often used to encourage high achievers to enroll at public institutions when they would have enrolled at private or out-of-state institutions otherwise.  While unproven, it is conceivable that this increases the quality of public institutions in ways that positively affect all students, thus justifying the expenditure.  For instance, high achievers might enable an institution to recruit and maintain a better faculty than they would have had otherwise.  While merit based grants can succeed in increasing enrollment, as seen with the Georgia HOPE program, they are also very inefficient since grants are given to many students who would have enrolled in college without them[iii].

Additionally, merit aid can be used to combat “brain drain.”  States may use merit based grants to attempt to keep their best students in-state in hopes that they will contribute to the state economy after graduation.  However, from a national perspective this is a zero sum game.  Causing high-productivity individuals to work in one state rather than another doesn’t increase overall productivity. In fact, it can even reduce productivity if it causes individuals to learn and work below their full potential.  New research indicates that some high achieving students who accept merit grants to attend public institutions have lower graduation rates than comparable peers who attend private or out-of state institutions[iv].

An alternative motivation for merit based grant programs is less self-serving.  Merit aid programs have the potential to increase high school student achievement.  For those students who are performing below their potential, the promise of a financial award may prompt them to work more diligently to prepare for college.

While the creation of merit based grant programs is not unreasonable, it is still not clear they are the best use of tax-payer dollars.  Since merit based and need based aid draw from the same budget, merit based grants reduce the availability of aid for disadvantaged students[v].  While we know relatively little about the effectiveness of student aid, research does show that grant aid targeted at low-income students can make a difference in enrollment and completion behavior[vi].  It is therefore costly to shift spending away from programs that deliver aid to the most disadvantaged students.

An additional concern with merit based aid programs is that they may lead to inflation more so than grants targeting low income households.  If institutions are skillful in executing price discrimination (charging students a price that reflects their maximum willingness to pay), then it doesn’t matter how aid is distributed.  However, to the extent that price discrimination is an imprecise science, targeting grant aid at low-income students should create less pressure for institutions to raise sticker prices.

[ii] This average includes students who do not receive any aid from the Pell program.  Among those who receive Pell grants, students from households with annual income below $30,000 earned an average award of approximately $4,200.

[v] Introducing a merit based grant program could garner support for tax increases that would lead to a larger budget for financial aid.  If this is the case, funds need not be redirected in order to support merit based grants.