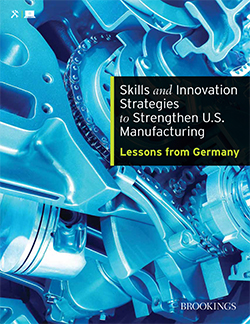 Faced with stagnating wages for most Americans, business, civic, and political leaders across the United States are rediscovering manufacturing as a source of good jobs and lasting economic growth. In an era of unrivaled global competition, however, revitalizing the U.S. manufacturing sector will require a renewed commitment to public-private-civic partnerships that deliver on the key driver of industrial competitiveness: a highly trained workforce that can use technology to translate basic and applied research and development (R&D) to large-scale commercial innovations.

However, in both skills training and technological innovation, U.S. policies to support manufacturing have not matched the sector’s evolution from one dominated by massive, vertically-integrated companies to a more distributed mix of small, medium, and large firms. In this new environment, research and development, particularly applied research, and skills training are underprovided in the market because individual firms fear they will not recoup their full investment if a competitor reaps the benefits of a new innovation or poaches a well-trained technician.

Other advanced nations have done a better job of addressing the market failures that inhibit industrial competitiveness. Germany is an oft-cited example of an advanced economy that has been able to sustain manufacturing as a relevant source of employment, growth, and exports. Manufacturing in Germany accounts for 20 percent of employment, nearly twice the share as in the United States, and generates 22 percent of national GDP and 82 percent of total goods exports. German manufacturing succeeds in the global marketplace even as the sector pays higher average wages than in the United States.

In November 2014 the Global Cities Initiative, a joint project of Brookings and JPMorgan Chase, brought 40 U.S. business, civic, and government leaders to Munich and Nuremberg, Germany to learn more about the German model for manufacturing competitiveness. For U.S. practitioners and policymakers interested in applying German best practices in their own places, this paper serves to document the key discussion themes and potential lessons from that trip. It provides a brief overview of the current state of manufacturing in each country, the German systems for innovation and vocational education and training, and concludes with examples of how U.S. leaders are applying the most successful elements of these German systems to the American context.