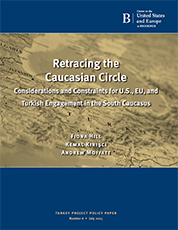 Harsh geopolitical realities and historic legacies have pushed the South Caucasus states of Armenia, Azerbaijan, and Georgia back onto the foreign policy agendas of the United States, the European Union (EU), and Turkey, at a time when all three have pulled back from more activist roles in regional affairs. The South Caucasus states have now become, at best, second-tier issues for the West, but they remain closely connected to first-tier problems. To head off the prospect that festering crises in the Caucasus will lead to or feed into broader conflagrations, the United States, EU, and Turkey have to muster sufficient political will to re-engage to some degree in high-level regional diplomacy. In “Retracing the Caucasian Circle Considerations and Constraints for U.S., EU, and Turkish Engagement in the South Caucasus,” authors Fiona Hill, Kemal Kirişci, and Andrew Moffatt explore the rationale and assess the options for Western reengagement with Armenia, Azerbaijan, and Georgia given the current challenges and limitations on all sides. Based on a series of study trips to the South Caucasus and Turkey in 2014 and 2015, and numerous other interviews, the authors review some of the current factors that should be considered by Western policymakers and analysts.

Constraints and considerations for U.S., EU, and Turkish engagement in the South Caucasus:

Despite the challenges that have beset the West’s relations with the South Caucasus and the growing disillusionment in Armenia, Azerbaijan, and Georgia, giving up on engagement is not an option.

• The United States, EU, and Turkey must work together, rather than separately
• “Under the radar” coordination on creative interim solutions and working with other mediators
• Focus on the development of “soft regionalism”
• Work with Georgia as the hub for furthering soft regionalism
• Devise adaptable policies as relations with Iran and China develop in the region

Time is Taiwan’s most critical asset