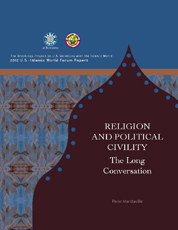 As communities revise their basic political rules and shape new political institutions, some of the most complex and vexing questions regard religion and what role it should play. On the one hand, there is much to be found in the world’s great religious traditions that strengthens and undergirds citizenship and political civility. Notions of tolerance, compassion, and respect for the rule of law and governing institutions are central to all great faiths.

But difficult issues frequently arise around the question of religion’s role in politics, particularly in the diverse societies that are increasingly the norm in a globalized world. For example, if faith informs public morality, what space is there for those whose religious beliefs are outside the majority—or for non-believers? And while many would agree that religious values can and should infuse political life, the question of whether religious authority has any superior claim to determine or affirm legislation raises a thorny set of issues. What is the appropriate relationship between the state and religious institutions and other faith-based actors? How can the full rights of all citizens—particularly those in the minority—be ensured, and who has the authority to determine the boundaries of citizenship? Given the importance to many of religion and religious values as the fundamental basis for determining right from wrong, what are the respective roles of the state and religious institutions in shaping, implementing, and enforcing both religious norms and secular affairs? Who is authorized to define and speak on behalf of religion? And when, as is inevitable, conflicts do arise over different conceptions of morality, authority, and national priorities, where can we turn to find resources and examples for resolving these disputes judiciously and equitably?

This paper reflects the rich and active discussions that took place on these questions, among others, during the course of the “Long Conversation” on religion, civility, and state-building at the 2012 U.S.-Islamic World Forum.