In this paper, authors Martin Beraja, Erik Hurst and Joseph Vavra of the University of Chicago, and Andreas Fuster of the New York Fed conclude that expansionary monetary policy helped stimulate the U.S. economy overall during the Great Recession, but may have widened the disparities among regions.

The authors show that mortgage originations almost tripled, in dollar terms, after the Fed announced its first round of quantitative easing (QE1). They also find a strong relationship between refinancing induced by QE1 and an increase in consumer spending, as measured by car purchases. However, mortgage refinancing increased the most in places with the fewest underwater homeowners, defined as borrowers who owed more than 80% of the value of their home. This occurred because it is more difficult and expensive for borrowers with little equity to refinance. In addition, the areas with little equity (which had experienced the largest declines in housing prices) tended to also suffer from the largest declines in employment. Collectively, their empirical results imply that QE1 provided the least amount of monetary stimulus to the metro areas hit hardest by the recession. 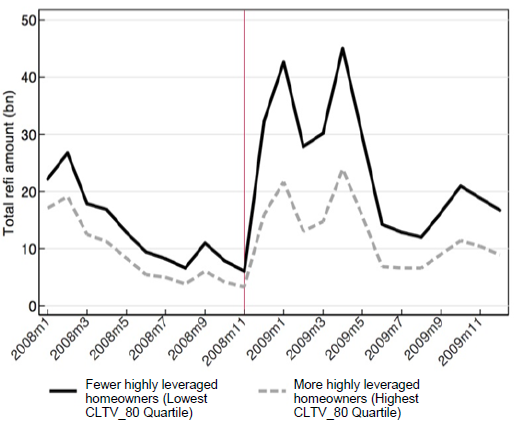 The authors offer a theoretical model in which a household’s decision to refinance when interest rates decline depends on the interaction of two variables: the value of their collateral (their houses) and their income. Homeowners with positive home equity will refinance; underwater homeowners usually cannot. Additionally, high income households are more likely to refinance when interest rates decrease than low income households. Their model suggests that monetary policy will amplify regional inequality when there is a strong correlation between income and home prices, as there was in 2008. Furthermore, the aggregate stimulative effect of low rates is likely also lower in such a situation. In contrast, the authors point out that in 2001, borrowers that faced a negative income or employment shock weren’t also underwater, meaning they were better able to benefit directly from the Fed’s monetary policy by refinancing.

Professor of Economics - University of Chicago Booth School of Business

Professor of Economics - University of Chicago