For many years, reducing energy subsidies in the Gulf Cooperation Council (GCC) countries was largely a taboo. Energy subsidies have served as a key social safety net for citizens, albeit an expensive and inefficient one.

The contrast with 2015 is remarkable: In a context of substantially fallen oil prices, in all countries in the GCC region a debate about energy subsidy reform has become prominent. The reasons why energy subsidies are problematic have been well documented, and range from market distortion and inefficient use of resources to depressing foreign direct investment and fueling overconsumption. Notwithstanding, energy subsidies have for a long time been a key element of a social contract, where governments in the GCC extract their countries’ oil and gas and distribute a part of the rents in return for social participation and compliance with the status quo. As energy subsidies increasingly have become engrained in GCC countries, in turn it has become economically and politically challenging to alter and reform them.

At first glance, the United Arab Emirates stands out amongst its peers in the GCC when it comes to concrete action on subsidy reform. Of the emirates, Dubai implemented initial electricity and water reforms in 2008 and made further pricing reforms in 2011, and in January 2015, after years of internal debate, Abu Dhabi followed suit. In addition, throughout the UAE fuel subsidies (i.e. gasoline and diesel) have been removed to ease pressure on the state’s budget, and prices are set each month based on global prices. Importantly, gasoline and diesel prices apply equally to expatriates and UAE nationals, which could have made the extent of pricing change a potentially more controversial topic had global oil prices not fallen by more than 50 percent since 2014. As we discuss in more detail in this paper, opinions can vary whether these reforms are significant or whether authorities have just put their toe in the water and in fact missed certain opportunities. In addition, these reforms may or may not be readily transferable to other contexts in the GCC.

Clearly, each country in the GCC, or wider MENA region for that matter, has its own political dynamics and unique political economy. At the same time, we believe that the case of the United Arab Emirates can provide important lessons regarding energy subsidy reform in hydrocarbon-exporting countries, which may well be valuable to other GCC members. Our policy brief begins with an analysis of specific energy subsidies in the UAE, including a discussion of their impact, what reforms have been initiated, and whether or not those are significant. Subsequently we explore the case of Dubai, one of the two major emirates and the one where sufficient time has elapsed since the most recent reforms to gain insights on the reform outcomes. As such, the case of Dubai provides initial data related to changes in consumption patterns, and the often-feared social backlash following reforms. Finally, we discuss the main lessons that follow from this analysis, and to what extent these are transferable to other cases in the GCC. 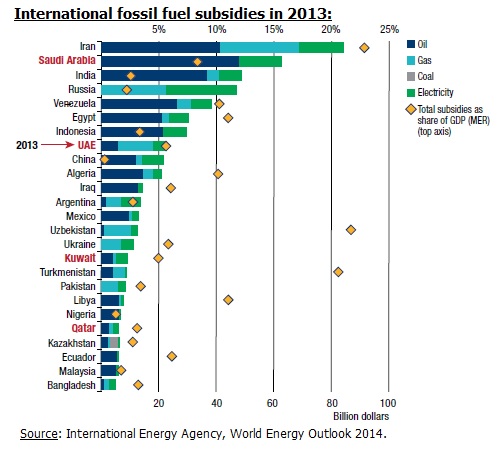