1. The Affordable Care Act (ACA) will improve the well-being and incomes of Americans in the bottom fifth of the income distribution. Under our broadest and most comprehensive income measure we project that incomes in the bottom one-fifth of the distribution will increase almost 6%; those in the bottom one-tenth of the distribution will rise more than 7%. These estimated gains represent averages. Most people already have insurance coverage that will be left largely unaffected by reform. Those who gain subsidized insurance will see bigger percentage gains in their income. 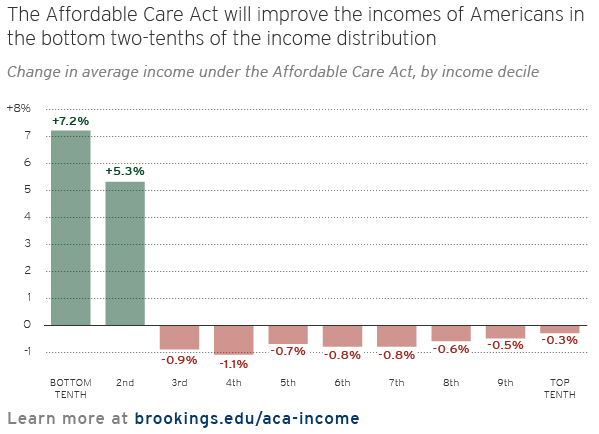 2. The gains in well-being at the bottom are hardly surprising. The goal of the ACA is to make health coverage more affordable by reforming insurance arrangements and by subsidizing the insurance purchases of low- and moderate-income families. The new subsidies will come through an expansion of Medicaid and the introduction of refundable tax credits for the purchase of insurance through new state Exchanges. Because Medicaid is costless to the low-income population and since the refundable tax credits will be restricted to families with incomes below 400% of the poverty line, the great majority of the beneficiaries of the new government spending will be in the bottom half of the income distribution. Our estimates suggest, in fact, that the overwhelming majority will be in the bottom one-third of the distribution.

3. Our analysis also shows, however, that the estimated gains and losses are crucially affected by the definition of household income. The most widely used measure—the Census Bureau’s “money income” measure—does not count health insurance as income. Under this definition, the ACA has small effects on income, including those at the very bottom of the income distribution. (Some at the bottom may see a slight decline in their money incomes; others will see an income gain.) Even when we use a somewhat more expansive definition of income—one that counts part of the value of insurance—Americans in the bottom tenth of the distribution gain little, but this startling result says more about the way income is defined than it does about how the ACA affects low-income households.

4. The finding that the ACA will not have much effect on standard estimates of poor Americans’ incomes is easily explained. It is a byproduct of the way “money income” is defined. The definition includes pre-tax money wages, net self-employment earnings, pensions, government cash transfers (such as Social Security and unemployment compensation), interest, dividends, rent payments, and other regular and irregular cash income flows. It does not include the health insurance contributions employers make for their workers. Nor does it include government spending on health plans, such as Medicaid and Medicare, which pay for most or all of the health care of the people who are insured. Employers and the government currently spend about $1.5 trillion—13% of total personal income—paying our health care bills. The ACA will increase public spending to help low- and moderate-income people pay their medical bills. If we use a definition that doesn’t count the extra spending as “income,” household incomes obviously will not change very much.

5. Experts recognize the shortcomings of income definitions that exclude health insurance. But figuring out how to include it poses a challenge. To include the value of free or subsidized health protection in income statistics, the Census Bureau sometimes uses a concept called “fungible income.” The fungible value of insurance includes the full premium contribution made by employers in behalf of their workers. It also includes some or all the subsidies provided by the government to participants in public health plans, but only for families who have enough cash income to pay for basic food and housing. If income exceeds this threshold, then part or all of the value of government financed health benefits is included. When families don’t have enough cash income to pay for basic food and shelter needs, none of the value of government insurance is counted as income. The key point is that the “fungible income” approach assigns to low income households little or no income value from publicly financed health benefits.

6. Only when we count as income the full cost to the government of providing additional health insurance to the poor does the ACA have a meaningful and positive impact on the post-ACA incomes of the very poor.

7. The benefits of the ACA to low-income families would have been greater if the enacted version of the law had been put into effect. The Supreme Court’s ACA ruling in 2012 means that states cannot be compelled to expand eligibility limits for Medicaid as Congress intended. Slightly more than half the states have decided to raise income limits for Medicaid, but 23 states have declined to do so. Low-income children and adults in those states who were not previously eligible for Medicaid will remain ineligible. The Supreme Court decision combined with state inaction means the impact of the ACA on insurance enrollment among Americans’ with the lowest incomes will be smaller than would otherwise be the case. An additional 6% of Americans in the lowest money income quintile would have obtained health coverage if the enacted version of the ACA had gone into effect.

8. Following the projections of the CBO and other forecasters, we anticipate small net declines of enrollment in employer-sponsored health insurance. Some workers will gain employer coverage, and others will enroll in existing employer plans because they face penalties if they don’t have coverage. However, some employers may drop coverage for part-time employees, and some workers will leave their employer plans because less expensive coverage will be available elsewhere (for example, under Medicaid). On net, we expect enrollment in employer plans to shrink 5.9 million, or about 3½%, in the population under 65.

9. We expect the changes in employer coverage to have effects on money income as well as on income measured under more comprehensive definitions. If employers’ health costs fall, many will pass most of the savings along to their workers in the form of higher money wages. If employer health costs rise, we expect them to cut cash wages so their compensation costs remain roughly unchanged. The impact of the ACA on employer coverage varies by income decile; so do its effects on money wages.

10. On balance our projections indicate the shifts in employer coverage will slightly reduce money wages in many parts of the income distribution but increase wages in the bottom quarter and top one-fifth of the distribution. Many workers with modest incomes will find it cheaper to obtain subsidized plans through the Exchanges or free Medicaid coverage than to continue their employer-based coverage. When they leave employer plans, they generate cost savings for their employers—assuming their employers do not have to pay penalties to the government. This will allow their employers to increase money wages. Money wage gains are more common for families with incomes between the 10th and the 25th percentiles and above the 80th percentile than they are in other parts of the income distribution. We therefore project families in these income ranges will see increases in their money incomes. Between the 25th and 80th income percentiles, we project money wages will decline modestly.

11. Under more comprehensive income definitions—ones that include the value of health insurance—most workers’ money wage gains and losses are exactly offset by corresponding losses or gains in the value of their employer health protection. However, those workers who substitute subsidized government insurance for an employer health plan typically see a net gain in income under comprehensive income definitions.

12. The ACA contains a variety of provisions to offset the extra cost to the government of boosting Medicaid enrollment and providing new tax credits for insurance purchase. We include some of the biggest items in our analysis. The ACA cut federal subsidies to Medicare Advantage plans. It increased Part B and Part D Medicare premiums for high-income enrollees. The law imposed a higher Medicare payroll tax and a new investment tax on high-income taxpayers. In addition, the law imposes income-related penalty payments on nonpoor families not covered by health insurance and on mid-size and large employers which do not offer affordable insurance to their full-time workforce. The Medicare premium increases and the tax hikes reduce the net incomes of high-income Americans, but the anticipated cut in Medicare Advantage subsidies will affect the net value of those plans for everyone enrolled in them. Also, except at the very bottom of the distribution we project that penalty charges will also affect the net incomes of some families in most parts of the distribution.

Growth and distribution in the digital era