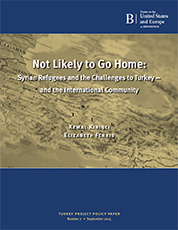 Since Elizabeth Ferris’ and Kemal Kirişci’s initial visit to Turkey in October 2013 to research the extent and impact of the Syrian refugee crisis on the country, the scale of displacement has increased dramatically. At that time, there were around two million refugees in Jordan, Lebanon, and Turkey. Today, this figure has climbed to more than 4 million and the estimates of the number of internally displaced persons have increased from around 4.2 million to 7.6 million. More than half of the population of Syria is displaced and in dire need of humanitarian assistance.

In addition to the significant increase in numbers, there are three striking differences between the refugee situation today and that of October 2013:

• The ethnic and religious background of the refugees has become much more diverse.
• The politics of receiving Syrian refugees has also dramatically changed.
• The worsening refugee crisis has deepened the social, economic, and political problems that were already visible in October 2013.

For Turkey, managing the presence of now two million refugees has not been an easy task—even for a country with significant administrative and economic capacity. The greatest and possibly the toughest problem has to do with the long run. What is still lacking is a comprehensive governmental policy towards integration. Burden-sharing is also critical in terms of legitimizing the expenses of the government in the eyes of the Turkish public by showing that caring for the refugees is an international responsibility.

The sudden surge in refugees should be a wake-up call for the international community to recognize its failure to share the burden with Jordan, Lebanon, and Turkey, and that the current humanitarian system is in some disorder. Ultimately, the solution to the Syrian displacement crisis is a political one demanding the settlement of the violent conflict in the country. Unfortunately, the international community is far from arriving at such a settlement.

Northwestern Syria needs humanitarian assistance. Getting it there must be a priority.