Despite the widely-recognized benefits of early childhood experiences in formal settings that enrich the social and cognitive environments of children, many children—particularly infants and toddlers—spend their days in unregulated (or very lightly regulated) “informal” childcare settings. Over half of all one- and two-year-olds are regularly cared for by caregivers other than their parents but only about half of those, i.e., a quarter of this age group, are in a licensed formal care setting. More four-year-olds attend licensed centers but still many primarily experience informal, non-parental care.

Current policy discussions focus primarily on preschool access and preschool quality, largely ignoring the low quality of care in informal settings. Yet many families are choosing those settings. They choose informal care for a variety of reasons, including lack of information about quality, the need for flexible or non-standard hours, cost, and availability. If policies do not address quality in this sector, they forsake the majority children under the age of four, a time of great potential for development of the capacities needed to thrive in school and after.

Early childhood education has strong and increasing bipartisan support. Congressman Tom Cole (OK-04) recently wrote, “The success of future generations depends on the investment made in our children during the earliest and most formative years,”[i] and Joaquin Castro (TX-20) concurred, “Investing in our kids early on will yield long-term benefits for our nation by strengthening our future workforce and increasing America’s competitiveness around the world.”[ii] These representatives lead the first Congressional Pre-K Caucus, which aims to call attention to the importance of access to early education and boost preschool access. The focus of the Caucus on formal pre-kindergarten programs is grounded in the widely publicized findings from a few studies of early model programs such as Perry Preschool and Abecedarian that found long-term positive impacts.

Despite the widely recognized benefits of early childhood experiences in formal settings that enrich the social and cognitive environments of children, many children—particularly infants and toddlers—spend their days in unregulated (or very lightly regulated) “informal” childcare settings. Recent data from the National Center for Education Statistics show that over half of all one- and two-year-olds are regularly cared for by caregivers other than their parents. Of those, less than half are in licensed formal care settings and about a third are cared for by a non-relative. By age four, most children have moved into formal care, but not all. Of the 78 percent in non-parental care, still a quarter spend most of their time in informal care.[iii]

These informal care settings provide strikingly different experiences for children. Using a nationally-representative sample of two-year-olds and four-year-olds, a new study of which I am a co-author with Daphna Bassok, Maria Fitzpatrick, and Erica Greenberg published in Child Development illustrates these differences and their potential consequences.[iv]

Television watching is perhaps the most vivid contrast. Four-year-olds in home-based, informal care watch an average of almost two hours of television per day, compared with fewer than 7 minutes in formal care. Similarly, in formal arrangements for four-year-olds, 93 percent of caregivers reported doing both reading and math activities on a daily basis. By contrast, 68 percent of informal sector caregivers reported daily reading, and 60 percent reported daily math.

The numbers for two-year-olds are even more dramatic, with television watching particularly high for those in non-fee informal care. Moreover, formal caregivers are far more likely to read books to the children and take them outside for walks than were those in informal care. 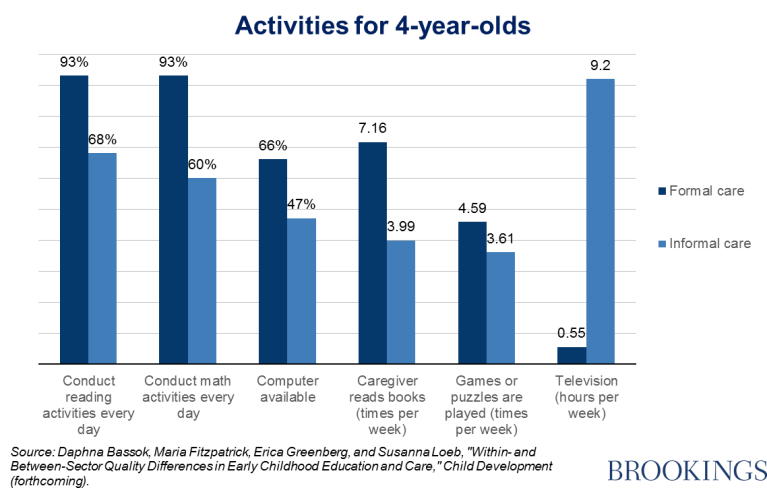 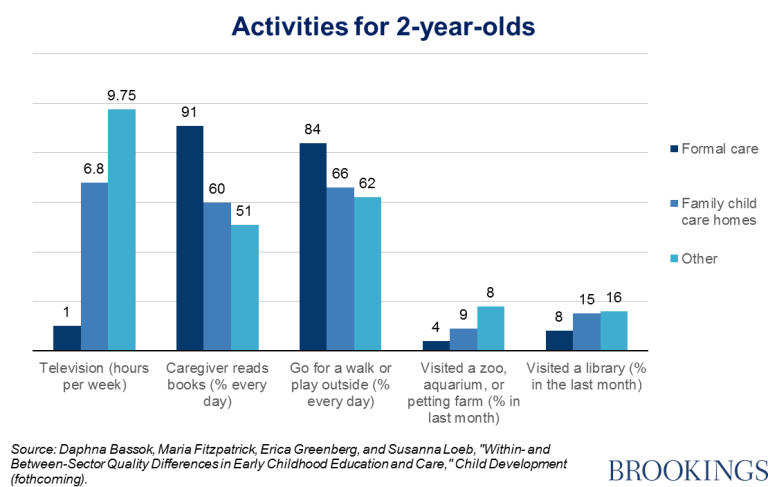 Substantial differences in the knowledge and skills of teachers may contribute to these experience differences for children. Caregivers in formal settings are far more likely to hold a degree in early childhood education, to have a Child Development Associate Credential, and to participate in ongoing training. As just one example, 80 percent of caregivers in formal settings for four-year-olds report participating in ongoing training. That number is only 16 percent for caregivers in informal care. 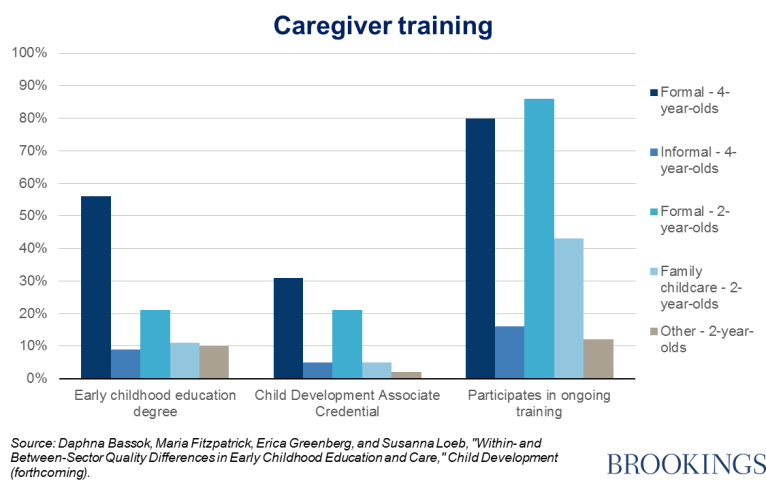 These differences may have consequences. Comparing children with the same cognitive scores at age two, those who attended formal care settings have learned substantially more by age 5, with both math and reading scores more than 20 percent of a standard deviation higher.

Often, differences in learning across programs can be explained by differences in the children who participate, but this is does not seem to be the case with formal and informal care based on data that include an extensive set of observables. Children from families in poverty attend informal care at almost the same rate as other children, though they are somewhat more likely to be in parental care and somewhat less likely to attend formal care settings. Children from Hispanic families are somewhat more likely to attend informal care settings than are other children, while children from black families are somewhat less likely. Overall, however, the differences are small, though these categories can mask tremendous heterogeneity. “Informal” can mean a terrific nanny that gives a child rich learning opportunities or it can mean a dangerous situation for young children. 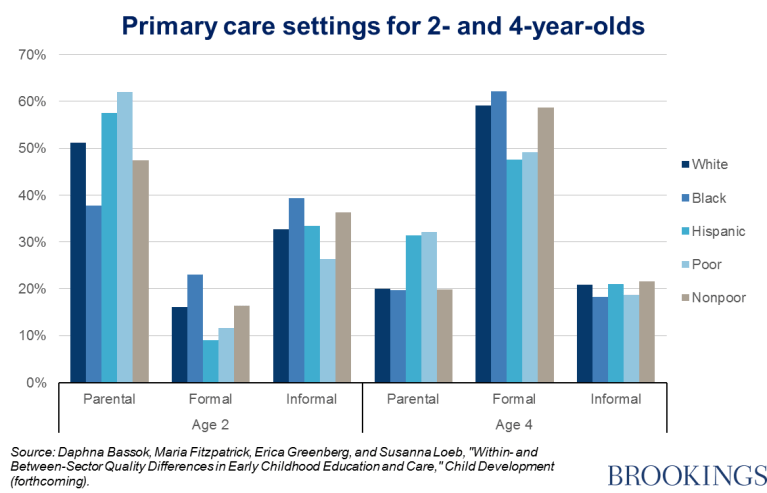 It is not surprising, given the broad range of children in each type of care, that adjusting for differences in children’s family background does little to explain the evident differences in learning between children in formal and informal care. Even children that look alike on a rich range of measured characteristics—including gender; race and ethnicity; income; birth weight; current weight and height; number of children in the home; maternal employment status; highest level of parents’ education; primary language spoken in the home; WIC receipt; a set of home practices including daily reading, television exposure, frequency of joint family meals, and parent discipline practices; urbanicity; and census region—still learn far less when they attend informal care settings than in formal care. 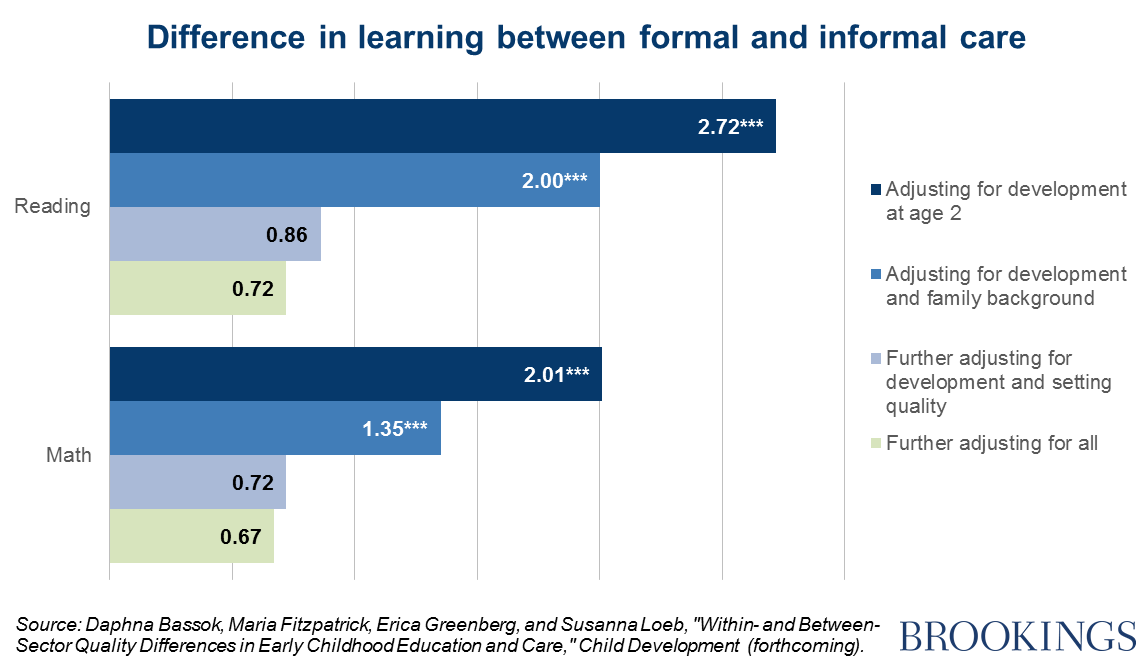 These differences in characteristics across sectors are associated with large differences in regulations between the sectors. Non-fee informal care is completely unregulated. Family childcare settings face some regulations but they are often weak. Many states don’t have education requirements for these caregivers, and those that do tend to require a high school degree or 12 years of school. In contrast, many states require preschool teachers to hold a college degree. Similarly, only a few states require any preservice coursework focused on early childhood for family childcare providers but almost all require it for preschool teachers and many do for other childcare centers as well.

Because quality differences mirror cross-sector differences in regulation stringency, increased regulations for infant, toddler, and home-based care may meaningfully improve the quality of care available to young children. For this reason, states have been increasing regulations for informal settings over time. For example, Vermont’s Legislative Committee on Administrative Rules just approved a long list of regulations proposed by the Department for Children and Families including regulations limiting screen time for children, prohibiting negative child-caregiver interactions, and increasing educational requirements for caregivers.[v]

However, such regulation is not costless and may, in fact, have unintended negative consequences. If regulations increase the cost of operations for informal caregivers, as they are likely to do, and such regulations are not accompanied by increased subsidies, the cost of childcare will rise, placing a further burden on working families with low incomes. Some informal caregivers will leave the sector or choose to provide “unlicensed” care, and as a result will not be subject to even the current level of regulation. Regulations alone create unfunded mandates and are unlikely to do the trick. If regulations are coupled with a financial investment to support regulated and affordable care, then families will be more likely to benefit. However, even here, the drawback of regulations is that they set a minimum standard but do little to improve quality above that standard.

Many families opt for informal care because they either cannot find or cannot afford formal care. One strategy to address this need is to improve access to high quality formal care. For instance, only five percent of three-year-olds are served by “state pre-K” and only eight percent are served by “Head Start,” leaving substantial room to improve access for these younger children. Washington D.C., for example, provides free preschool to all three- and four-year-olds. However, this approach also takes money.

The U.S. does not have a history of investment in young children. We currently spend less on childcare than many other countries. The OECD compiled data on 36 countries and found that only Estonia, Cyprus and the Slovak Republic spend a lower proportion of GDP on childcare and early education services than the United States. Denmark spends over five times as much.[vi] Hillary Clinton’s plan to cap daycare costs at ten percent of a household’s income would be a dramatic change from this historical pattern, but it is currently little more than a concept.[vii]

Many families select informal care not only because of the cost of formal care but also because of the flexibility informal caregivers provide. Parents’ working hours may not match well to those offered by the typical formal setting. Current formal care offerings simply do not meet families’ needs in this regard. One alternative to increasing access to formal care is to use the formal sector to support improvement in the informal sector. As an example, Federal Early Head Start-Child Care Partnerships provides grants for new or existing Early Head Start programs to partner with local childcare centers and family childcare providers serving infants and toddlers from low-income families. Early Head Start brings with it services and a standard of care that is not as common in the informal sector.

Information for parents about the quality of care options may lead parents to select higher quality options and also provide centers and family childcare homes incentives for improvement. Parents—particularly low-income parents—struggle to find affordable care options and to delineate between higher- and lower-quality options. Quality Rating and Improvement Systems (QRIS), which directly collect and distribute information on licensed settings, are a good step in this direction, though very few currently mandate participation for home-based providers. Still, many families may need more direct support in choosing high-quality care. Policies aimed at building cohesion across sectors by coordinating services and funding streams through centralized eligibility determination may provide families with higher quality while still meeting parents’ need for flexible care.

High quality preschools are currently the main focus of early childhood policy, but are only one part of the early education and care landscape. The first few years of human life are a period of rapid brain development, with large increases in synaptic connections and subsequent pruning of those that are unused. Yet, frequently, infants and toddlers who are not with their parents are subject to low-quality informal care that may have adverse effects on their developing brains as well as their knowledge, emotions, and behavior. The focus of early childhood needs to expand to this age group and to this informal sector if it is to create opportunities for children to thrive.