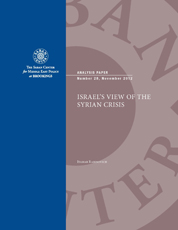 For decades, Israel viewed Syria as its most bitter Arab enemy. Syria’s Arab nationalist ideology was fiercely anti-Israel, and border disputes left the two nations perpetually on the brink of conflict. After the June 1967 war, Israel’s occupation of the Golan Heights became the most important issue separating the two countries, and when Syria joined the peace process launched in Madrid in October 1991, the future of the Golan Heights became the main bone of contention between the adversaries. The Israeli-Syrian negotiations came close to fruition but ultimately failed. During the early years of Bashar al-Assad’s reign, relations with the United States became tense and Israeli-Syrian contacts were severed. The Ehud Olmert years in Israel saw renewed peace talks with Syria via the Turkish channel, again raising hopes of an end to hostilities but again ending in failure.

In early 2011, the outbreak of the Syrian crisis that has since descended into civil war sparked a rethink of Israel’s policy toward its neighbor. While Israel may have once preferred the Assad regime to remain in power rather than take its chances with an unknown successor, this “the devil we know” approach is no longer valid. After Israel had found itself frustrated by developments beneficial to Iran and its “Resistance Axis” throughout the Arab Spring—most notably the fall of Zine el Abidine Ben Ali and Hosni Mubarak—the increasing pressure on the Syrian regime has represented a blow to Iran and its allies. Thus, while recognizing that Israel has little to no influence on the course of events in Syria, Israel’s leaders have largely reached a consensus that Assad’s departure from power is preferable.

As it rages on, Syria’s civil war complicates a variety of Israel’s foreign policy priorities. Clearly, the uncertainty in Syria has put the question of the Golan Heights on hold indefinitely. It may be a long time until Israel can readdress the prospect of giving the Golan back to Damascus, as many hawkish (and in fact some dovish) Israelis have seen Bashar al-Assad’s actions in his domestic crisis as proof that past efforts at a Golan-for-peace deal were misguided. Israel’s efforts to challenge Iran over its nuclear program are also affected by the instability facing Tehran’s ally in Damascus. If Israel or the U.S. were to launch a military strike against Iran’s nuclear facilities, a desperate and beleaguered Assad could conceivably seek to transform his domestic war into another Arab-Israeli war by taking the opportunity to attack Israel on Iran’s behalf. However, the Syrian conflict has the potential to bring the damaged Israeli- Turkish relationship closer to normalcy; if the two nations can resolve their dispute over the Mavi Marmara incident, they can find common ground in seeking to foster a stable post-Assad government in Syria.

Overall, Israel would prefer regime change in Syria, but has concerns about what type of government would succeed Bashar al-Assad. It hopes for a secular regime to emerge, but due to limited influence —and the likelihood that support for any faction would backfire due to Israel’s toxic reputation in the Arab world—it is maintaining a passive stance. Without changing this greatly, however, Israel should build discreet channels to the emerging actors in Syria to prepare for future outcomes. And with several neighbors—such as Turkey, Jordan, and the Gulf states—sharing some common goals for the outcome of the Syrian crisis, Israel must seek to cooperate with them to advance its interests, which requires building trust with those actors. Thus, to avoid being a bystander in the Syrian crisis, it would serve Israel well to re-engage with Turkey and earn good will in the Arab world by seriously restarting the Palestinian peace process.