We are at the beginning of a revolution in the quantity of information available to prospective college students and their families about their postsecondary options.  Until recently, little information was available on how each college’s graduates fare in the labor market, forcing prospective students to instead base their decision on reputation and anecdotes.  This has finally begun to change, with data from both public and private sources.

This revolution could not have come at a better time, as the dysfunction of the market for higher education coupled with declining taxpayer subsidies has driven prices up to a point where many families are questioning whether college is worth it at all.  Contributing to these concerns are media reports of students who borrow too much to earn degrees that do not pay off, at least right away, or who never complete a degree at all.

Students go to college for reasons other than increasing their earning potential, but knowing roughly what to expect can help them make better decisions about how much to borrow, and decrease the risk that they will earn degrees that leave them unemployed and unable to repay their debts.  A student may have good reasons to choose a degree program where graduates earn an average of $45,000 over one with average earnings of $50,000, but it is hard to imagine someone choosing a program where students seldom graduate and most of those who do struggle to find jobs.

There are two leading organizations working to provide this kind of information: PayScale and College Measures.  PayScale is a private company that gathers self-reported salary and education data from visitors to its website, and produces estimates of the “return on investment” for a large group of colleges.  College Measures is also a private organization, but works mostly with state governments to produce estimates of average earnings (and other outcomes) for college graduates by linking administrative records on education and earnings, with the latter usually drawn from the state’s unemployment insurance reporting system.

Which source is better?  Both have advantages and disadvantages.  College Measures has much more comprehensive data for recent graduates in participating states, in that they capture the earnings of most workers who remain in those states.  Obtaining accurate data on a large sample of graduates is a huge advantage over relying on self-reported information from a self-selected group of visitors to a particular website.  This is especially the case for providing data down to the degree program level (e.g., a particular major at a particular college), where the number of potential data points is often small.

But College Measures data are currently only available for a handful of states, and do not capture the earnings of earlier graduates over a longer period of time.  PayScale is thus an important source of information, especially for colleges for which no other information on earnings is available.  For example, even if PayScale’s estimates of absolute earnings levels are inaccurate, the data may provide useful information on the relative earnings of graduates of different colleges.

I provide some empirical evidence on this question by comparing the reported average earnings at 76 colleges and universities for which data on the salaries of recent graduates are available from both PayScale and College Measures.[i]  These colleges are located in six states that have partnered with College Measures: Arkansas, Colorado, Florida, Tennessee, Texas, and Virginia. It is important to bear in mind that the two data sources do not measure exactly the same thing.  PayScale data are based on graduates with five or less years of work experience, whereas data from College Measures are based on graduates in their first year of work only.

The figure below shows that the two measures of early-career earnings are clearly correlated but often diverge significantly.  On average, reported earnings are 14 percent lower using the College Measures data than using the PayScale estimates.  This divergence is not surprising given that incomes tend to increase as workers gain experience and the PayScale data include workers who have worked for up to five years (compared to only one year for the College Measures data).

More importantly, both measures show considerable variation in the average earnings of recent graduates, but often lead to divergent conclusions about individual institutions.  A ranking of institutions based on graduates’ earnings would look noticeably different depending on the data source.  For example, two of the top three data points in terms of earnings according to College Measures are in the middle or bottom of the pack on the PayScale measure. 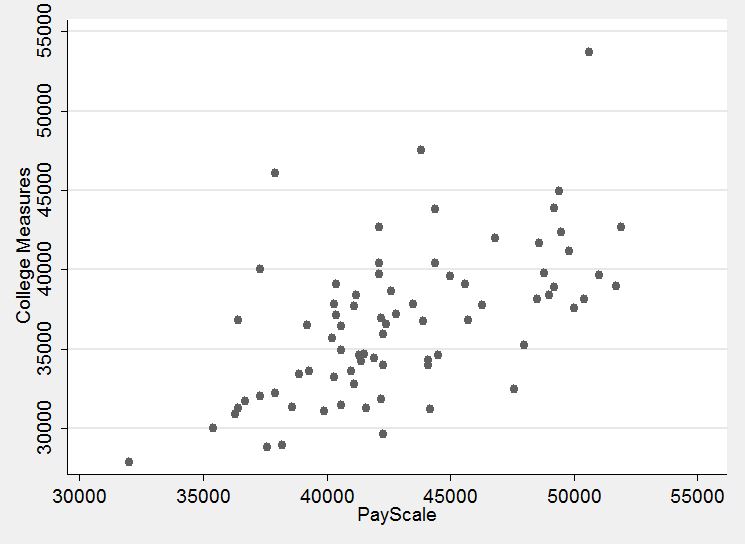 Does this mean that we should discard the PayScale data as misleading?  No, at least not yet.  The PayScale data are clearly better than no data at all, as shown by their correlation with the College Measures data (r=0.59).  In the 44 states where PayScale is the only game in town, that’s an especially important contribution.  PayScale is not able to be comprehensive given their data sources; it lacks salary data for 34 percent of the colleges that College Measures reports on.  But PayScale can also help make up for the fact that College Measures does not include private colleges in many of its partner states, including 40 private colleges in the six states discussed here.

The half of the glass that is full here is the rapidly expanding availability of this kind of information.  The half that remains empty includes the many colleges for which no data are available, and the limitations of the data that have become available.  Even the College Measures data exclude many students, such as the unemployed and those who leave the state where they attended college after graduation.

The solution here is clear given that the federal government already has most of the information needed to provide a comprehensive look at the labor market outcomes of students at every college in the country.  The next reauthorization of the Higher Education Act should end the ban on a federal unit-record database that links administrative data on education and earnings, while keeping in place appropriate privacy protections for individual students.

The politics of higher education reform make this much easier said than done, but perhaps opposition will soften in the face of this inevitable data revolution.  Data from sources like PayScale and College Measures are not going away, and stakeholders afraid of transparency will likely be best served by a federal solution that maximizes the accuracy and comprehensiveness of the available data.

[i] I thank Bridget Galassini for assistance with data collection.  I use the “typical starting salary” from PayScale’s 2014 College ROI Report and the “average [or median] first-year earnings” from six College Measures ESM reports.  I exclude one college (Colorado School of Mines) because it was an outlier in terms of its earnings as reported by PayScale (and, to a lesser degree, as reported by College Measures).

* Note: Following the original publication of this piece, it was brought to our attention that PayScale data are based on graduates with five or less years of work experience, whereas data from College Measures are based on graduates in their first year of work only. The piece has been revised to reflect this fact.