Editor’s Note: This paper is part of the Australian Civil-Military Centre’s 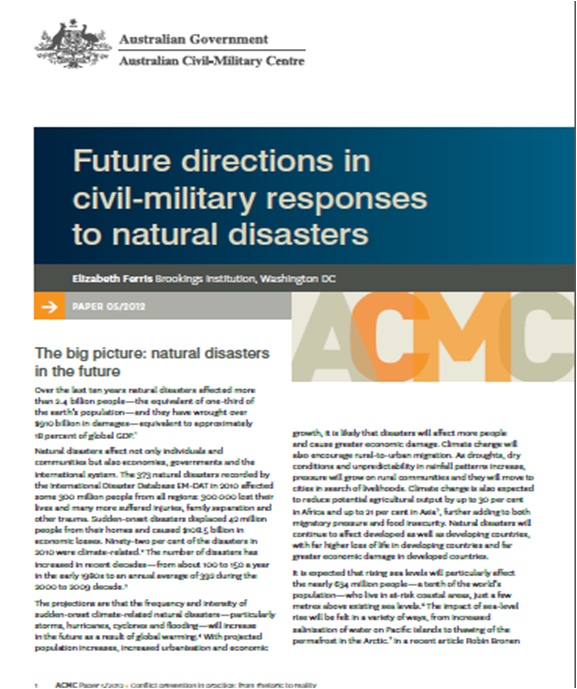 Over the last ten years natural disasters affected more than 2.4 billion people—the equivalent of one-third of the earth’s population—and they have wrought over $910 billion in damages—equivalent to approximately 18 percent of global GDP.[1]

Natural disasters affect not only individuals and communities but also economies, governments and the international system. The 373 natural disasters recorded by the International Disaster Database EM-DAT in 2010 affected some 300 million people from all regions: 300,000 lost their lives and many more suffered injuries, family separation and other trauma. Sudden-onset disasters displaced 42 million people from their homes and caused $108.5 billion in economic losses. Ninety-two percent of the disasters in 2010 were climate-related.[2]The number of disasters has increased in recent decades—from about 100 to 150 a year in the early 1980s to an annual average of 392 during the 2000 to 2009 decade.[3]

The projections are that the frequency and intensity of sudden-onset climate-related natural disasters—particularly storms, hurricanes, cyclones and flooding—will increase in the future as a result of global warming.[4] With projected population increases, increased urbanisation and economic growth, it is likely that disasters will affect more people and cause greater economic damage. Climate change will also encourage rural-to-urban migration. As droughts, dry conditions and unpredictability in rainfall patterns increase, pressure will grow on rural communities and they will move to cities in search of livelihoods. Climate change is also expected to reduce potential agricultural output by up to 30 percent in Africa and up to 21 percent in Asia,[5] further adding to both migratory pressure and food insecurity. Natural disasters will continue to affect developed as well as developing countries, with far higher loss of life in developing countries and far greater economic damage in developed countries.

It is expected that rising sea levels will particularly affect the nearly 634 million people—a tenth of the world’s population—who live in at-risk coastal areas, just a few metres above existing sea levels.[6] The impact of sea‑level rise will be felt in a variety of ways, from increased salinisation of water on Pacific islands to thawing of the permafrost in the Arctic.[7] In a recent article Robin Bronen points out that winter temperatures have increased by an average of 2.0–3.5° since 1975 in the Arctic, causing the rapid disappearance of ice, increased erosion, increased exposure of communities to autumnal storms, and thawing of the permafrost, which is the ‘glue’ that keeps the land intact and habitable.[8]

Although ‘natural disaster’ is a widely used term, it is important to point out that natural hazards do not in themselves constitute disasters: rather, it is the interaction between natural phenomena and human actions that creates disasters. Deforestation, for example, has led heavy rains to cause landslides in Central America and Nepal, while the failure to maintain levees along the southern Mississippi River intensified the effects of Hurricane Katrina.[9]

The Inter-Agency Standing Committee (the global coordination body, with representation of all international humanitarian organisations) has defined a ‘disaster’ as ‘a serious disruption of the functioning of a community or a society causing widespread human, material, economic or environmental losses which exceed the ability of the affected community or society to cope using its own resources’.[10] In other words, the impact of natural disasters is a function of both the severity of the natural hazard and the capacity of the population to deal with it. One analyst noted, for example, that a citizen of Haiti had an 8 percent chance of dying in violent shaking during the January 2010 earthquake, while a person living in Chile had only a 0.01 percent chance of dying, even though the February 2010 Chilean earthquake released 400 times more energy than the Haitian earthquake.[11]

Most attention and media coverage focuses on mega-disasters—such as the Japan earthquake of 2011 or the Pakistan floods of 2010—but the fact is that 90 percent of disasters cause fewer than 50 casualties,[12] and (although there is no research on this) it seems likely that the cumulative effect of small disasters could be considerable on communities. The concentration of attention on mega‑disasters is paralleled by funding trends. More than 95.56 percent of international disaster funding in 2010 went to only two emergencies—the Haitian earthquake and the Pakistani floods—while the remaining 3.54 percent of humanitarian funds was shared between 54 other disasters. The other 317 recorded disasters received no international funding, or at least were not included in the UN’s Financial Tracking System.[13]

While awareness of the need to respond quickly and effectively to communities affected by disasters has grown, there has also been increasing recognition that disaster response involves more than rapid mobilisation of assets to deliver assistance and that protection and human rights considerations must also be incorporated in the response.[14] After the 2004 Indian ocean tsunami, reports of discriminatory access to assistance, violence in temporary shelters and other protection concerns led the Inter-Agency Standing Committee to adopt the Operational Guidelines on the Protection of Persons in Situations of Natural Disasters.[15]

Although it is the responsibility of national governments to protect and assist those living in their countries when disasters strike, governments themselves are often weakened by disaster and lack the capacity to respond adequately. In some cases this leads international players to substitute for governments, which can have the paradoxical effect of actually weakening national capacity.[16] The international humanitarian system is already stretched to respond to present disasters; it will be even more stretched in the future. The humanitarian system that has developed in the past five or six decades is made up of a multitude of actors—UN agencies, government aid departments, the Red Cross Red Crescent movement, international and national non-government organisations, local civil society groups, military forces, and an increasing number of non‑traditional participants such as business and militias. In the aftermath of the earthquake in Haiti, for example, hundreds of community groups and NGOs arrived in the country, most of them with the best intentions but with little experience in disaster response.

This proliferation of participants has created enormous coordination problems. Systems that work effectively with 20 or 30 participants are overstretched when hundreds of organisations are involved. There are particular difficulties coordinating the efforts of national governments, international humanitarian organisations and local civil society groups. The fundamental question is whether the current ‘business model’ of humanitarian assistance is capable of responding to the challenges of a world in which there are more natural disasters, as well as conflicts that create situations of humanitarian need.

The media have always played a role in mobilizing international attention and responses to disasters, but increasingly social media provide immediate coverage of major disasters and of the response to them (which will almost always be much slower than people expect). One of the effects of social media coverage of disasters is that it increases political pressure for rapid response: governments that are perceived to respond slowly will suffer politically.

It is in this context of increasing numbers of disasters, growing pressure for responses and a complex world of humanitarian action that we turn to the question of the participation of military forces in disaster response and their relationship with civilian organisations. Although the focus of the discussion is the military, much of the analysis that follows also applies to police forces; in fact, police forces often have very specific skills that are crucial to providing security for humanitarian operations.

[2] OFDA/CRED International Disaster Database, Université Catholique de Louvain, Brussels, www.emdat.be. Figures on displacement are taken from the Internal Displacement Monitoring Centre, www.internal‑displacement.org. The terms ‘sudden onset’ and ‘slow onset’ are widely used to differentiate between disasters that occur with little warning (such as earthquakes and tsunamis) and those that develop over a longer period (such as drought), yet there is no accepted dividing line between sudden-onset and slow-onset disasters.

[15] IASC, Operational Guidelines on the Protection of Persons in Situations of Natural Disasters, Brookings–LSE Project on Internal Displacement, 2011, www.brookings.edu/reports/2011/0106_operational_guidelines_nd.aspx.