For low-income working families, the Earned Income Tax Credit (EITC) is one of the nation’s most effective tools for reducing inequality and alleviating poverty. However, as President Obama pointed out in his State of the Union address, “It doesn’t do enough for…workers who don’t have kids.” In fact, given the modest provision for childless workers (which begins to phase out at just 55 percent of full-time, minimum wage earnings), a childless worker making poverty-level wages would actually be taxed into poverty under current tax law.[1]

With the release of the president’s budget for fiscal year 2015, the administration provided details for how it would go about expanding the EITC to bolster the credit for workers without qualifying children.[2] The administration’s proposal joins others from officials in both the House of Representatives and the Senate aimed at strengthening the EITC for childless workers and, in turn, its work incentive and poverty alleviation effects. These proposals include Representative Richard Neal’s Earned Income Tax Credit Improvement and Simplification Act of 2013 and the Working Families Tax Relief Act of 2013 introduced by Senators Sherrod Brown and Richard Durbin.[3]

To better understand each of these proposals’ impact on low-wage workers at the state level and across the nation’s 100 largest metro areas, we used our MetroTax model to assess the effects of each expansion scenario, based on 2012 American Community Survey microdata and Tax Year 2012 tax law.[4] We found that:

Our findings illustrate that, beyond the potential national impact of these expansions, it is important for policymakers, advocates, and practitioners to understand how such an expansion would play out across and within states. For one, the EITC represents a significant federal investment in low-wage workers and the communities in which they live and, just as low-income families and workers are not spread evenly across the country, EITC filers (including those who would be affected by its expansion) are not evenly distributed across communities and states. In addition, changes to the federal credit also have implications for the many states and the handful of localities that operate complementary versions of the credit, as well as for advocates and practitioners involved in outreach and education efforts to help ensure eligible filers claim the credit at tax time.

The administration proposal and the Brown-Durbin/Neal legislation (the House and Senate bills adopt the same expansion parameters) each address the EITC’s current shortcomings by targeting two key provisions of the credit for workers without qualifying children (Figure 1).[5] Specifically, these proposals would:

1. Expand the eligible age parameters. Under current law, non-parents and noncustodial parents must be at least 25 and under 65 years of age to qualify for the EITC. Each expansion proposal lowers the minimum age to 21, in order to encourage and reward work in the critical early stages of young adults’ careers. (However, each remains consistent with current law in that anyone eligible to be claimed as someone else’s qualifying child or dependent would not be eligible to claim the EITC themselves, including full-time students who are financially dependent on their parents.[6]) The president’s proposal also increases the upper age limit from 65 to 67, to harmonize the credit with increases in Social Security’s full retirement age.

2. Increase the maximum credit and phase in/out range. As currently structured, the EITC for workers without qualifying children phases in and out at 7.65 percent (or 7.65 cents per dollar of earnings), reaching a modest maximum credit (about $500 in Tax Year 2015). Both the administration proposal and the Brown-Durbin/Neal legislation would double the phase in/out rate to 15.3 percent to fully offset payroll taxes. Although the proposals adopt different income levels at which phase-in ends and at which phase-out begins, each would appreciably increase the maximum credit. The president’s proposal would double the maximum credit to about $1,000 in Tax Year 2015, while the Brown-Durbin proposal would set the maximum benefit to roughly $1,400 in that year. 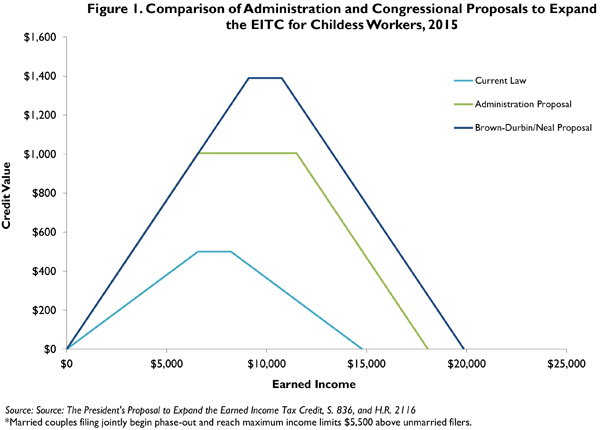 Both Proposals Would Significantly Strengthen the Credit for Millions of Workers

Based on our MetroTax model analysis of 2012 census data, we estimate that the president’s proposal to expand the EITC would benefit a total of 14.1 million taxpayers—extending eligibility to about 6.6 million tax filers and increasing benefits for roughly 7.6 million filers already eligible for the EITC (Figure 2).[7] The Brown-Durbin/Neal congressional proposals would also boost the credit for 7.6 million currently eligible filers but, because they would reach higher up the income ladder (in addition to broadening the age parameters), they would also extend eligibility to an additional 7.6 million tax units for a combined impact of 15.2 million filers. 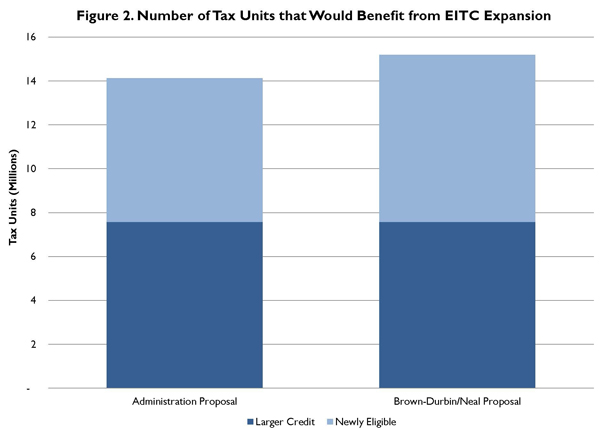 The filers benefiting from these expansions—who are most likely to work in industries such as retail, accommodation and food service, health care, educational services, and administrative services—would see a significant increase in the size of the typical credit for which they would qualify. The president’s proposal would invest an additional $6.5 billion in these workers, raising the average benefit from about $260 to almost $600. The Brown-Durbin/Neal legislation would make these filers eligible for up to an additional $8.8 billion, which would increase the average credit for these workers to $710.

While every state would benefit from an expansion to the EITC for workers without qualifying children, several states stand to more than double their number of taxpayers eligible for this portion of the credit. Under the administration’s proposal, 15 states could see the number of filers claiming the credit for childless workers increase by roughly 100 percent or more, and as many as 35 states could at least double their number of eligible workers if the Brown-Durbin/Neal legislation is enacted.

Many of the states that lead the list for increases under both scenarios—including Vermont, Rhode Island, North Dakota, and Iowa—already have a higher-than-average share of childless workers claiming the credit under current law. An expanded EITC for childless workers could raise the average credit to these filers by $340 or more, bringing millions of dollars in additional investment into each state. (For detailed state data, see Appendix A.)


Under either expansion scenario, 61 percent of the filers who would benefit from a stronger EITC for childless workers live in the nation’s 100 largest metro areas, ranging from over 16,000 filers in the Ogden, Utah metro area (under the president’s proposal) to as many as 696,000 in metropolitan New York (under the Brown-Durbin/Neal legislation).[8] (For detailed metro area data, see Appendix B.)

Within the 100 largest metro areas, both expansions would boost benefits for nearly 4.7 million filers who are currently eligible for the credit. At the same time, the administration proposal would expand eligibility to an additional 3.9 million filers, while the Brown-Durbin/Neal proposals would increase the eligible population by 4.6 million. These expansions would increase the EITC dollars potentially claimed in these regions by between $3.9 billion (under the president’s proposal) and $5.4 billion (under Brown-Durbin/Neal legislation), with metro areas like Albany, Milwaukee, Rochester, and Pittsburgh experiencing some of the biggest percentage changes in EITC dollars for childless workers. (See the map.) 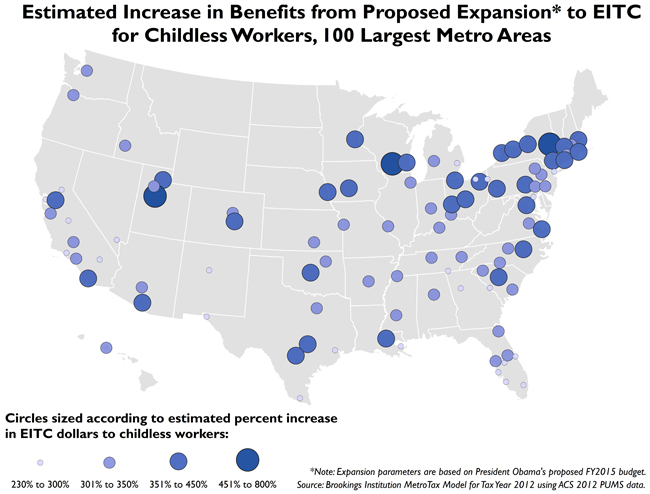 While every major metro area would benefit from an expanded childless worker credit, the list of metro areas that would experience the biggest uptick in average credit amounts is similar under each proposal. These metro areas represent a diverse mix of regions, including Augusta, Baton Rouge, El Paso, and Louisville in the South; Grand Rapids, Milwaukee, and Minneapolis-St. Paul in the Midwest; Albany and New Haven in the Northeast; and Salt Lake City in the West.

Whether policymakers adopt the president’s proposal or the reforms outlined in the Brown-Durbin/Neal bills, it is clear that strengthening these two key components of the credits—broadening the age range over which workers qualify for the credit and increasing the maximum credit and phase in/out rates—would significantly increase the EITC’s impact for millions of workers without qualifying children. Modernizing this provision of the EITC by enacting these expansions would help ensure that the credit is as effective a work incentive and poverty alleviation tool for childless workers as it continues to be for working families.

[2] This provision is often referred to as the “childless worker” credit, but workers claiming this credit also include noncustodial parents.

[3] Representative Charles Rangel also introduced legislation proposing an expansion to the EITC’s childless worker credit in the bill H.R. 4117 “EITC for Childless Workers Act of 2014.” While not discussed in detail here, the bill suggests similar measures for expanding the credit, including lowering the eligible age and increasing the maximum credit and phase in/out rates.

[4] For more details about the MetroTax model from which these estimates are derived, see the Technical Appendix. Note that the technical appendix refers to Tax Year 2005, but that we used 2012 American Community Survey data and Tax Year 2012 tax law as a baseline for this analysis.

[5] In addition to expanding the childless worker credit, both proposals would also make permanent the American Recovery and Reinvestment Act expansions for families with three or more children and for married couples filing jointly. Those expansions are currently set to expire in 2017.

[6] The American Community Survey does not provide information about full-time versus part-time school enrollment status. For the purposes of determining household dependents and qualifying children in the MetroTax model: If individuals between the ages of 18 and 24 are living with family members and are flagged as enrolled in college or graduate school, we assume they are enrolled full time. For students living independently, we assume they are eligible for the credit if they meet the age and earnings guidelines. The Neal proposal differs slightly from the others in that it would not make the credit available to any student enrolled in school more than half time. Because of data limitations, we did not model that version of the expansion, but instead used the Brown-Durbin provision, which would extend to all students who meet the age and income parameters.

[7] As noted above, for this analysis, we used the most recent microdata available—the 2012 American Community Survey PUMS data—and the corresponding Tax Year 2012 individual income tax filing rules and requirements. Differences exist between MetroTax model estimates and those included in the administration’s proposal, likely due to differences in the data sources used and the tax year on which estimates are based.