There is perhaps no relationship as significant to the future of world politics as that between the U.S. and China. No other two nations play such dominant roles in critical global issues from peace and security to finance, trade, and the environment. How these two powers manage their relationship will likely be a key determinant of not only their own political and economic futures, but also wider global stability and prosperity. 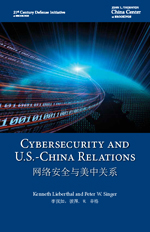 In the web of relationships that have built up between the U.S. and China, no issue has emerged of such importance, and generated such friction in so short a time span, as cybersecurity. Concerns over this domain have rapidly moved to the forefront of U.S.-China relations. While both senior policymakers and general publics are struggling to understand the cyber realm’s basic dynamics and implications, the issue of cybersecurity is looming ever larger in U.S.-China relations and is seriously affecting threat perceptions on both sides.


Given what is playing out, it is especially important that Washington and Beijing begin to build the bases for greater mutual understanding, cooperation, and development of common norms in how they deal with the many issues emerging in cybersecurity. The path will be a challenging one for both U.S. and Chinese experts and officials, but if these two nations are to set both the Internet domain and global order towards a more positive future, then facing the challenges of cybersecurity is an imperative today.

The promise and perils of the new space boom