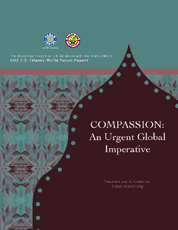 At the 2012 U.S.-Islamic World Forum, the Religious Leaders Working Group brought together religious leaders and activists from all over the world to discuss compassion and how to restore it to its rightful place as the test of true spirituality and the heart of religious and moral life. The working group’s participants discussed the Charter for Compassion, written in 2008 by leading activists and thinkers representing six of the major world faiths, and how the group could build a global network of compassionate religious communities. The group decided that it would initially develop a succinct guide to explain what a compassionate synagogue, church, temple, or mosque would look like in the 21st century, making it clear that compassion has nothing to do with pity or sentiment but consists of a principled determination to transcend selfishness and reach out imaginatively and practically to all others—not simply those we find congenial. In September, Karen Armstrong will give the keynote speech at the Islamic Society of North America, and will announce that ISNA has endorsed the Charter and that Imam Mohamed Magid has declared the All Dulles Area Muslim Society (ADAMS) Center a Compassionate Mosque and will invite all ISNA mosques to do the same.

After we have piloted this scheme, we hope to create an international council of clergy from all faiths, who would bring a truly compassionate and authoritative perspective to world crises and challenges, countering the strident voices of extremism and making the compassionate voice of religion a dynamic, practical, and positive force in our dangerously polarized world. Only then can the faith traditions fulfill one of the chief tasks of our time: to build a global community where people of all ethnicities and ideologies can live together in mutual respect. It is time for religion to become pro-active. As a first step, the group would like to make a two-minute video, filmed and edited by Unity Productions, to make the compassionate ideal more comprehensible and accessible to a still wider audience.

Author, A History of God: The 4,000-Year Quest of Judaism, Christianity and Islam

The perfect storm for Israelis and Palestinians

The coming crisis in Idlib