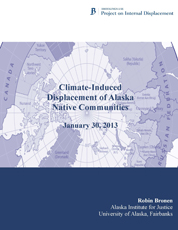 Alaska has warmed twice as fast as the global average during the past half-century, and temperatures are projected to rise 1.5-5° F (1-3 ºC) by 2030 and by 5-18° F (3-6.5 ºC) by 2100. Less sea ice covers the Arctic Ocean today than at any time in recent geologic history. At the same time, the land itself is also affected by temperature increases. Permanently frozen subsoil – permafrost – keeps the land intact and habitable along the northwestern Alaskan coast, but is melting. These environmental phenomena are resulting in accelerated rates of erosion and flooding which damage or destroy infrastructure and threaten the livelihoods and well-being of people residing throughout Alaska.

Since 2003, federal and state governments have documented these climate change impacts on Alaskan communities and the need for immediate action to protect populations. State and federal government agencies are struggling to respond to the enormous new needs of these communities. Despite spending millions of dollars, the traditional methods of erosion control and flood protection have not been able to protect some communities. For several Alaska Native communities, protection in place is not possible and community relocation is the only adaptation strategy that can protect them from accelerating climate change impacts. This paper presents a brief overview of climate change in Alaska, examines the impact of climate change on Alaska Native rural villages, and analyzes the state, federal and community responses.

ASEAN and the Quad: Strategic impasse or avenue for cooperation?