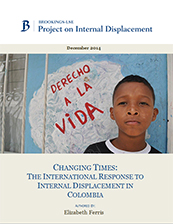 Colombia is a country of paradoxes; while the number of internally displaced persons (IDPs) has increased from 2 million in 2004 to over 6 million in 2014 (and currently ranks second only to Syria in the scale of displacement), the government has taken impressive steps not only to address the needs of IDPs but to bring an end to the long conflict with guerrilla groups. The government has developed perhaps the world’s most comprehensive legal system for IDPs, the constitutional court has played an impressively assertive role in protecting IDPs and civil society organizations in Colombia are among the world’s strongest. However, there are parts of the country, including parts of major urban centers, that are inaccessible to humanitarian actors and to the state. Criminal gangs, paramilitaries, narcotráfico groups, cartels, guerrillas, and other non-state actors have become the major drivers of displacement and present particular challenges to humanitarian actors. Displacement within cities, for example, is increasing as a result of violence committed by gangs and other non-state actors.

The case study concluded that overall IDPs are better off in Colombia than they were ten years ago—but this is largely due to a major court decision in 2004 which compelled a more robust state response. IDPs are now formally recognized by law as victims of the armed conflict and entitled to reparations. In the process of developing policies for victims, however, the particular vulnerabilities associated with internal displacement are becoming less visible.

While IDPs are better off in terms of assistance, there are still major shortcomings in prevention, protection and solutions. Solutions depend on security (which is becoming more complex with the proliferation of armed actors) and often complex processes around land and tenure in either the home community or in communities where IDPs live. While national laws, policies and institutions are well-developed, there is a universally-acknowledged gap at the municipal/provincial level where lack of political will, financial resources, management capacity and, in some cases, corruption, limit the implementation of these laws and policies. It is also likely that issues around security sector reform will have a major impact on solutions for IDPs – an area in which humanitarian actors have been only marginally involved. While all attention – by government, international actors, civil society, IDPs/victims – is now focused on the peace process, violence may actually increase – at least in the short term – after the signing of the peace agreement. The Colombian government understandably wants to close the displacement file and is committing significant resources to support victims, including IDPs, to find solutions.

The impact of COVID-19 on human rights

How many more migrants and refugees can we expect out of Venezuela?