In the 13 years since the dawn of the new millennium, significant progress has been made in addressing some of the world’s most important problems. One billion fewer people live in extreme poverty, 3 million children’s lives are saved annually and 610 million children in developing countries are enrolled in primary school, more than ever before. However, this progress has not been shared evenly around the globe. Populations affected by weak systems of governance and that suffer violence and disasters have systematically been left behind. 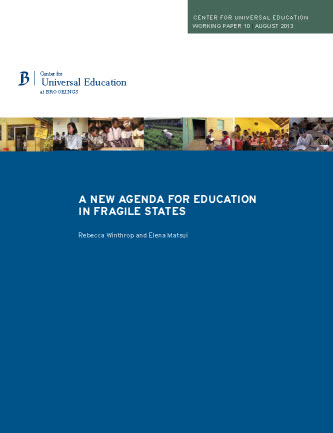 They are much less likely to enjoy progress vis-à-vis any of the United Nations’ Millennium Development Goals (MDGs), which include eradicating extreme poverty and hunger, improving children and women’s health, and enrolling children in school. No country classified as a “fragile state,” for example, has met all eight of the MDGs. Children born in low-income, conflict-affected countries are twice as likely to die before the age of five years, twice as likely to lack access to clean water and more than three times as likely to not attend school than children living in peaceful, low-income countries. People living in poverty, many of whom are affected by conflict, are more vulnerable to the effects of climate change and disasters. Children are especially affected, and those from the poorest families are up to 10 times more likely to bear the brunt of environmental disasters linked to climate change.

The needs of people living in fragile states are an urgent priority for our time, and thus will almost certainly be prominent in the next round of global development goals. As the global community reflects on the new agenda that will replace the MDGs when they expire in 2015, it will do well to take stock of the existing strategies for supporting the needs of populations in fragile states. A range of strategies are undoubtedly needed, and there is good reason why there is a heavy emphasis on the economic, legal and security dimensions of development efforts in fragile states. However, efforts in the social sphere are equally needed, and education is one important strategy for supporting populations in fragile states that was often overlooked until recently.

This report provides a broad review of the field of education in fragile states and charts a new agenda for maximizing education’s contribution to the development and well-being of people living in these contexts. We hope it serves as a comprehensive introduction to the topic for those coming to this issue for the first time as well as provides new insights for those already actively engaged in the subject. The arguments we make here are based on evidence developed both from careful analysis and synthesis of the latest available data as well as primary research.