The final version of this paper was published in June 2018 in the World Bank Economic Review. 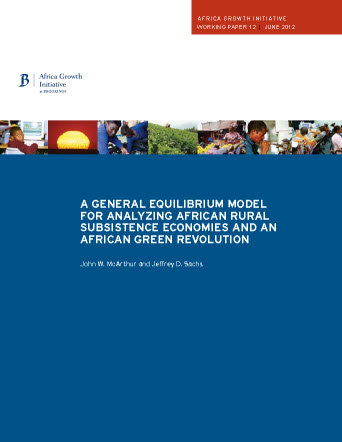 How can foreign aid support economic growth in sub-Saharan Africa? An assessment of this important question
must begin by recognizing that the majority of the region’s extremely poor people live in rural areas and depend
primarily on subsistence agriculture for their livelihoods. Modern input technologies now exist to boost small-holder
productivity in these settings, where there is also commonly a need to address soil nutrient dynamics as a core component
of any agricultural productivity strategy. Among other factors, Malawi’s progress in doubling average national
maize yields since 2005 through an aid-supported input subsidy program has prompted analysis around the merits
of increasing public finance to small-holder agriculture throughout Africa.

The overall positive average relationship between aid and economic growth is described by Clemens et al. (2012)
in their dissection of earlier high-profile studies on the same topic. In the course of their analysis, Clemens and colleagues
differentiate between two categories of aid. One is dubbed “early impact” aid and includes support for sectors
like roads, energy, banking, agriculture and industry, any of which might be expected to boost growth in the short to
medium term. The other category entails activities “whose growth effect might arrive far in the future or not at all”. This includes social sector areas like education, health, water and humanitarian assistance. The segmented
analysis of aid can be compared with more aggregate-style assessments, such as in the prominent recent paper by
Werker, Ahmed and Cohen (2009). Although the distinction between aims and effects across aid types has received
some research attention, the
topic generally still receives inadequate focus in the economics literature.

At the same time, evidence is accumulating on the positive aggregate relationship between agricultural productivity
improvements, poverty reduction and economic growth. There is
therefore a need to link the “aid and growth” questions with the “agriculture and growth” questions, especially in the
African context. This includes the need for a model to analyze the structural macroeconomic dynamics that would
result from publicly financed staple food productivity improvements in rural African economies.