It highlights the key economic distinctions among Ajmer, Allahabad, and Visakhapatnam, illustrating the potential areas in which Smart City improvements could be targeted for future action.

The literacy rate, for example, is an important determinant of prosperity, as it affects regional workforce capabilities and industrial patterns of development. The overall literacy rates of Ajmer, Allahabad, and Visakhapatnam is very similar. However, equitable outcomes can still vary, with Allahabad, in particular reporting a narrower gender literacy gap. 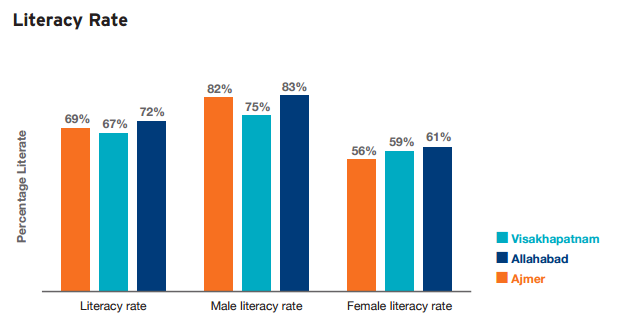 The state of each city’s education and health infrastructure is similarly important to examine. Ajmer consistently outperforms Allahabad and Visakhapatnam on this indicator. Allahabad, meanwhile, frequently lags behind in each category, perhaps in part explaining its higher infant mortality rate. Although Visakhapatnam contains more health facilities overall given its large population, it tends to rank lower on a per capita basis in many categories.

Ajmer is once again a frontrunner as far as educational amenities are concerned. It boasts a higher concentration of primary and secondary schools and colleges, in line with its generally higher literacy rates. Visakhapatnam, interestingly, tends to have a higher share of recreational facilities by comparison. Collectively, such variation helps explain the foundational infrastructure already in place—or lacking—in these cities as they accelerate various improvements over time.

The availability of local government public services, as described below, can shed light on how much progress each city has made toward greater modernisation. 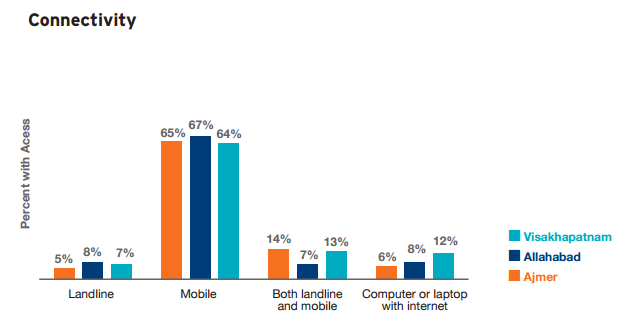 Visakhapatnam has more widespread access to treated water, in-house toilets, and wastewater drainage, while Ajmer struggles to provide these basic services despite having a smaller population—possibly indicating its more limited administrative capacity.

However, even among relatively poor metro areas across the world, the Indian metro areas stand out. The GDP per capita in Ajmer and Allahabad is easily the lowest, hovering near $1,000. 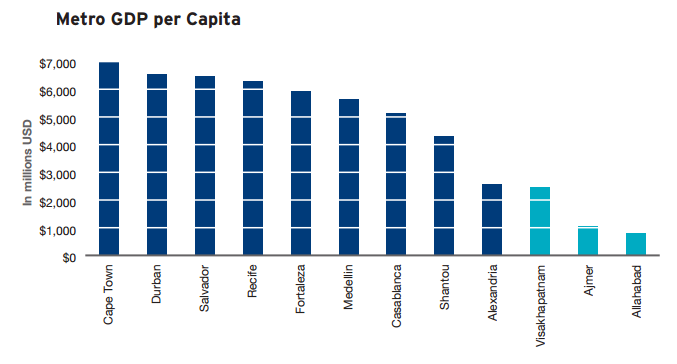 Electricity is equally important to economic development, and it is a key requirement to operate Smart City technologies. It is simply impossible to operate digital infrastructure without electricity. The Indian cities trail their Brazilian peers, but Visakhapatnam and Ajmer both exceed Medellín, Casablanca, Cape Town, and Durban. However, Allahabad has easily the lowest electricity access of all cities. The inability to charge a laptop or connect to the Internet from Indian homes presents a serious barrier to any Smart City project that requires direct individual interaction. 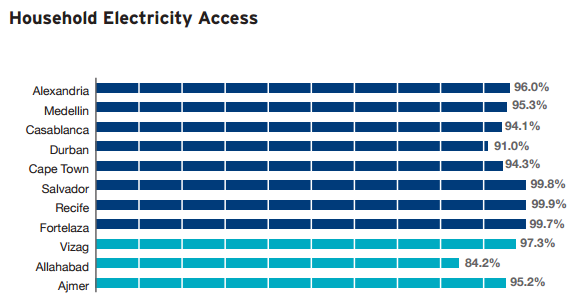 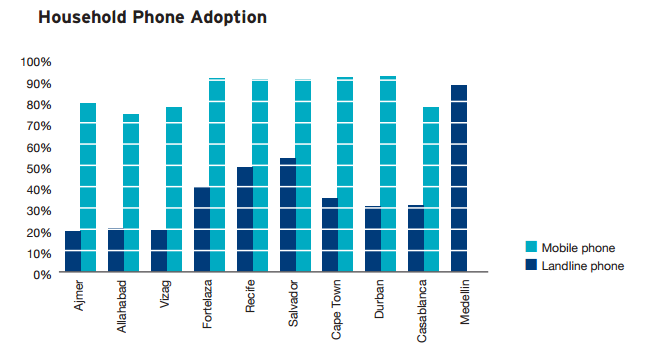 Considering the expected growth in India’s urban population, the launch of the Smart Cities Mission offers an overarching opportunity and underscores India’s urban challenges. The opportunity lies in using digital technologies in each of the proposed Smart Cities to improve growth trajectories, both in terms of quality of life and economic output. The challenge is confronting the significant hurdles to achieving such growth.

As the Smart City Mission continues to develop, it is critical that cities and their federalist peers deliver on these clear needs.

Download the PDF of the report, “Building Smart Cities in India”

The fight against forced labor and modern slavery