A shrinking slice of American union workers are in industries exposed to imports and other pressures from international trade.  Yet, among all the threats to organized labor and the wages of American workers, the AFL-CIO has made a priority of fighting the Obama administration on the Trans-Pacific Partnership trade deal, which probably won’t much have much economic impact anyhow. Why? 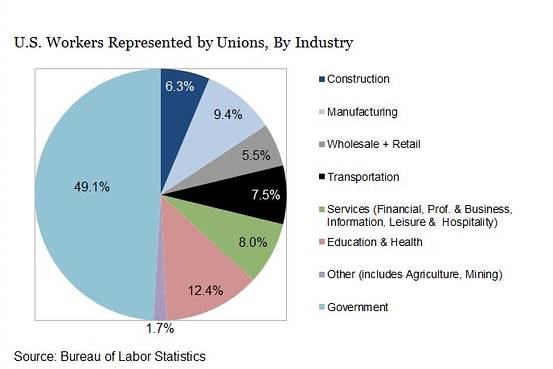 Half of all U.S. workers represented by unions work for governments, and another 12% are in education or health care. Trade has very little direct impact on them.  Another 20% of workers represented by unions are in construction, wholesaling, retailing or transportation doing jobs that are largely immune from import competition. Less than 10% of all the workers that U.S. unions represent today are in manufacturing or agriculture, the industries most exposed to harm from globalization. Trade creates winners and losers; a small fraction of union workers are among the obvious losers.

So with states passing right-to-work laws, Congress pressuring the National Labor Relations Board, the tax code rewarding big corporations that move overseas, funding for education, training and infrastructure under pressure middle-income wages stagnating across the whole economy, why so much union energy devoted to fighting TPP?

I got part of the answer from AFL-CIO President Rich Trumka when he talked about trade the other day before a not-very-sympathetic audience at the Peterson Institute for International Economics. He assigns a very large share–an improbably large share, in my view–of the blame for stagnant wages and inequality to recent trade agreements. (He insists organized labor is not against trade or trade agreements, but against “bad trade agreements,” though he didn’t recall any good ones.)

“For more than 20 years, we have looked at trade through the very narrow lens of corporate interests,” he said. “In truth, our trade deals were not really trade deals—they were investment deals. Their goal was not to promote America’s exports—it was to make it easier for global corporations to move capital offshore and ship goods back to America. The logical outcome was trade deficits and falling wages—and that’s exactly what we got.”

“The wages of working people have basically not gone up a dime since 1997 when inflation is taken into account. Since then, all of the gains from increased productivity–not some, not most, but all–have gone to the people who need it least. We know that our trade policy is a critical part of the structure of our economy—a structure that either is about raising wages or pushing wages down.” In short, he argues, trade agreements are bolstering the bargaining power of employers at the expense of workers.

To be sure, there is evidence – more than free-trade economists like to admit – that globalization is part of the reason American workers aren’t doing better.  As former Treasury Secretary Lawrence Summers put it recently, “The consensus view now is that trade and globalization have meaningfully increased inequality in the U.S. by allowing more earning opportunities for those at the top and exposing ordinary workers to more competition, especially in manufacturing.”

In contrast to Mr. Trumka, though, Mr. Summers says trade agreements aren’t the cause. Technology and increasing sophistication of developing economies are fueling emerging-market export machines. An example: The U.S. and India haven’t signed any new trade agreements in 20 years yet trade between them has increased ninefold.

On the other hand, Mr. Trumka isn’t alone in suggesting that much of what’s in TPP is aimed at shoring up intellectual-property and other protections for U.S. corporations. That’s good for the companies, but may not do much for their American workers. “The investor class has benefited on both sides of the border, not workers,” he said. Paul Krugman, the Nobel-winning Princeton economist, makes the same point.

Still, I find it hard to find an economic rationale for the intensity of the AFL-CIO’s fight against TPP.

Some of this reflects old habits: Manufacturing unions, their clout still large though they represent a shrinking share of organized labor, are bitter about all the jobs lost to imports and outsourcing. They are, essentially, fighting the last war. They haven’t forgotten that the  North American Free Trade Agreement over-sold it as a job-creator. Not one AFL-CIO union backs TPP or the president’s request to Congress for Trade Promotion Authority (which allows a president to negotiate a deal and get an up-or-down vote on it from Congress), not even unions whose members probably would benefit from more trade.

Much of this represents today’s political dynamics. Public-sector unions are under assault, and hoping that standing shoulder-to-shoulder with what’s left of industrial unions will help them win political battles.  Even if state government workers in Wisconsin aren’t threatened by trade deals, they realize – perhaps too late – that the thinning ranks of private-sector unions hurt their cause.

And organized labor is frustrated by the Obama White House. They don’t accept the argument that unless the U.S. helps sets the rules with TPP, China will set them. They don’t buy the Obama argument that the status quo is “the worst of all worlds,” in which China and other Asian economies have access to U.S. markets and low-wage jobs already have left the U.S. – and that TPP will the U.S. access to Asian markets and is the only way to lift labor and environmental standards abroad.

They had hoped for a trade policy radically different from the ones that George W. Bush and Bill Clinton pursued – or at least some high-profile symbolic differences. And they don’t think they got that.

Is democracy failing and putting our economic system at risk?

William A. Galston and Elaine Kamarck
Tuesday, January 4, 2022
Get daily updates from Brookings