Given the risks they endure, it is troubling to think that many military veterans are having trouble entering the civilian labor market. While older veterans typically earn more and have similar employment rates as non-veterans in their same age group, that’s not true for younger veterans. In 2013, the unemployment rate for young veterans aged 25-34 was 9.1 percent, compared to 7.4 for non-veterans in the same age group. This is the cohort that enlisted after September 11, 2001 and some risked their lives in the harshest battles of Iraq and Afghanistan.

So what’s the problem?

One thing that jumps out is that veterans under 30 are much less educated than their peers. Data from the 2012 American Community Survey show that just 30 percent of those aged 25 to 30 have completed an associate’s degree or higher, compared to 44 percent of their non-veteran peers. By contrast, older veterans have much higher rates of degree completion and only a small gap with their non-veteran peers of 2 percentage points for those aged 36 to 64.

The gap even extends to fields of study. Just 5.7 percent of Vets aged 25 to 30 have completed a bachelor’s degree in a high-paying STEM major, compared to 10.4 percent of non-Vets in the same age and at least 10.0 percent of veterans in every older age cohort.

The problem is not that young veterans are foregoing college, just not completing. 74 percent have attended at least some college compared to 68 percent of their non-veteran peers aged 25 to 30.

One potential explanation is the quality of schools that young veterans attend. A survey from the Department of Education found 16 percent of undergraduate veterans and 23 percent of graduate veterans were enrolled in for-profit colleges. Comparable figures for the non-veteran population were not available, but only 6 percent of total U.S. completions come from those schools.

My analysis of veterans’ resumes (hosted by Monster.com) tells a similar story. These resumes tend to be posted by younger veterans, with an average estimated age of 31. In the Monster database, the average veteran has conducted his or her highest level of education at an institution with an on-time graduation rate of just 24 percent, whereas the U.S. rate is 38 percent. Compared to older veterans,  younger veterans are significantly more likely to have attended a for-profit college, one with a lower graduation rate or lower test scores.

Various studies suggest that, regardless of demonstrated academic ability, students benefit from attending more selective colleges in terms of graduation rates and future earnings. It is certainly clear from survey data that graduates from more selective schools earn more.

The benefits of attending higher quality colleges can also be seen in the Monster resume data for veterans. I find that a number of factors predict a higher likelihood of working in a high paying occupation: level of education, years of previous work experience both in an outside the military, majoring in business or a STEM field (especially engineering, computer science and nursing), and living in a high income metropolitan area. Yet, even controlling for these factors, attending a private-for-profit college reduces expected earnings (based on the average earnings of the occupation listed in the resume) by 19 percent. A 20 percentage point increase in the graduation rate lifts earnings by 4 percent. Even attending a school in which more students study in higher-paying majors increases expected earnings. 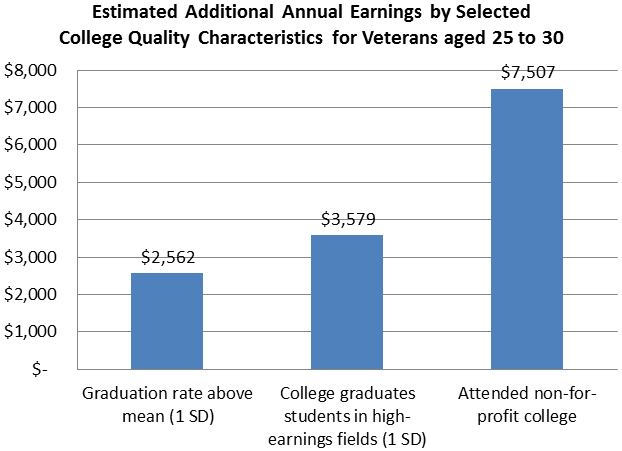 Attending a good school is not just a symbolic or networking advantage. It translates into higher value skills, as indicated by the salaries employers advertise for job vacancies that list those skills (a method I developed in a recent Brookings report using Burning Glass data on openings and skills).

For these reasons, the country needs to better prepare and encourage young veterans to aim higher when it comes to college enrollment, and high-quality colleges and universities need to do a better job of recruiting and retaining veterans. More and better access to data can help accomplish both goals.

This opinion piece originally appeared at

The geography of prosperity: How to help the areas lagging behind

The future of securing global cities

Sequestration’s Effects on Defense, the Economy and Metro Areas