Last week Wal-Mart surprised reporters by announcing a pay hike for its most poorly paid workers. The company declared it will raise its minimum base wage to $9.00 an hour starting in April and will boost the minimum hourly pay of all its current employees to no less than $10.00 an hour in February 2016. Wal-Mart’s press release promised that about 500,000 of its 1.3 million employees will see pay increases as a result of the new wage schedule. The announcement startled many observers because the retailer is famous for its efficiency and its commitment to maintaining rock-bottom costs. Parsimony in employee compensation is a well-known route to keeping costs low.

The announcement is good news for Wal-Mart employees at the bottom of the company’s pay ladder, but it is less clear whether it signals the start of a shift toward faster wage gains in the wider economy. Nine states containing over a fifth of U.S. workers have a legal minimum wage that is already $9.00 an hour or higher. In those states, Wal-Mart’s lowest pay workers will presumably be little affected by the April wage hike. The federal minimum wage is just $7.25 an hour, but slightly more than half the nation’s wage earners work in states where the local minimum wage is $8.00 or more. The efforts of state voters and legislators to boost the minimum wage have had a bigger impact on low-end wages than the pay policies of a single private employer, even the largest one.

Wal-Mart estimates that its new policy will lift the average wage of its full-time employees by just 15 cents an hour (to $13.00 per hour) as of April 2015. Its part-time workers will see a bigger jump in average pay—a bump of 52 cents an hour—but according to the company’s press release, the hourly wage of part-timers will only average $10.00 an hour come April. For purposes of comparison, the Economic Policy Institute estimates that the hourly pay of the American worker at the 20th percentile of the wage distribution was $10.08 an hour in 2014. This means that typical part-time Wal-Mart associates will earn a wage that places them among the lowest paid one-fifth of U.S. workers, even after the April pay hike takes effect.

Many labor economists, including me, think Wal-Mart’s new wage policy was the predictable result of a tighter job market. Since the worst months of the Great Recession in late 2009, the unemployment rate has fallen more than 4 percentage points (Chart 1). Other indicators of labor market slack have also improved. Initial claims for unemployment benefits have dropped by more than half. The number of unemployed job seekers per job opening fell from 6.8 to less than 2. The number of workers in part-time positions who want full-time jobs dipped 2.3 million, or more than one-quarter. When decent jobs become more plentiful, low-wage employers, including Wal-Mart, must work harder to fill vacancies and hold down employee turnover. One way to fill vacancies faster is to offer higher starting salaries. A way to reduce employee quits is to offer current workers bigger pay hikes and better fringe benefits. 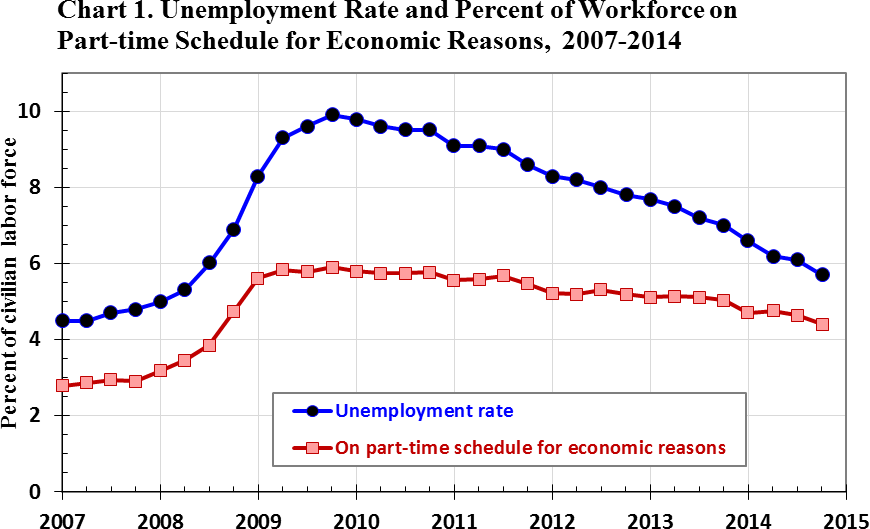 A lingering mystery of the current recovery is why pay gains have been so meager, even as the unemployment rate continues to drop. The Labor Department publishes a number of statistics that help us keep track of wage growth. None of them shows wages climbing much faster than 2 percent a year, and only one shows modest acceleration in the rate of annual wage gain. Probably the broadest measure of wage growth is obtained in the Bureau of Labor Statistics (BLS) Current Employment Statistics program. The survey includes over 140,000 businesses and government agencies. From that, the BLS produces an estimate of the average hourly earnings received by the employees of all businesses and agencies, including regular and overtime pay, incentive payments, and earnings supplements for weekend and late-shift work. 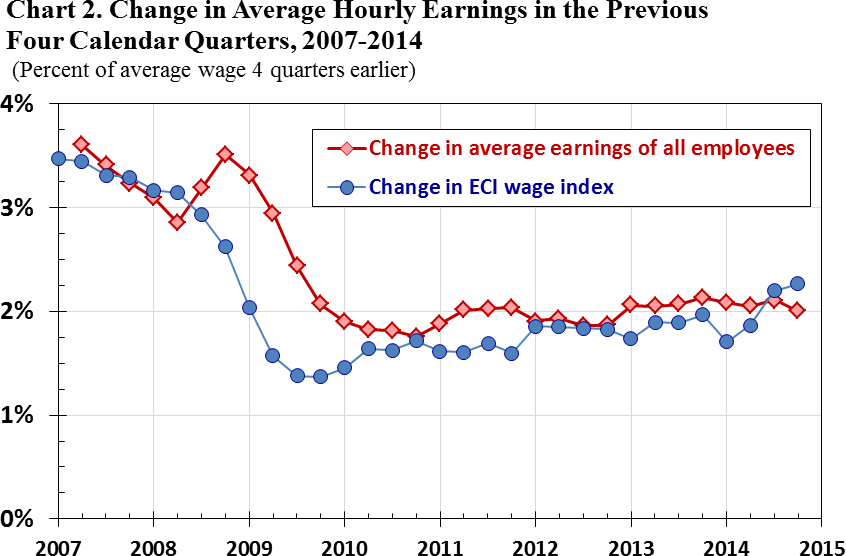 The BLS has also developed an alternative estimate of wage change, the Employment Cost Index, which is not influenced by shifting patterns of employment across industries and occupations. This index attempts to measure the change in pay holding constant the share of employment within each industry and occupation. It shows that wages have climbed almost 2 percent a year over the past five years. Unlike other wage series, however, this index suggests there may have been a modest spurt in the rate of wage gain in the past year. In the four calendar quarters ending this past October through December, the Employment Cost Index for wages rose 2.3 percent, slightly faster than its growth in the previous four years (Chart 2).

The drop in unemployment and rise in job openings ought to improve workers’ bargaining power in wage negotiations with employers. If jobs are more plentiful, employees should be less reluctant to quit in order to obtain better pay, better fringe benefits, or a more congenial work schedule. The quit rate has indeed bounced back from the very low levels seen in the Great Recession and immediately afterwards. So far, however, workers’ increased willingness to quit has had little impact on the pace of wage gain. Since the start of the current recovery, improvements in worker compensation have trailed improvements in worker productivity by a wide margin. Company owners have captured a record-high percentage of the value added by businesses in the nonfarm sector; workers have seen their share of output fall to an all-time low (Chart 3). 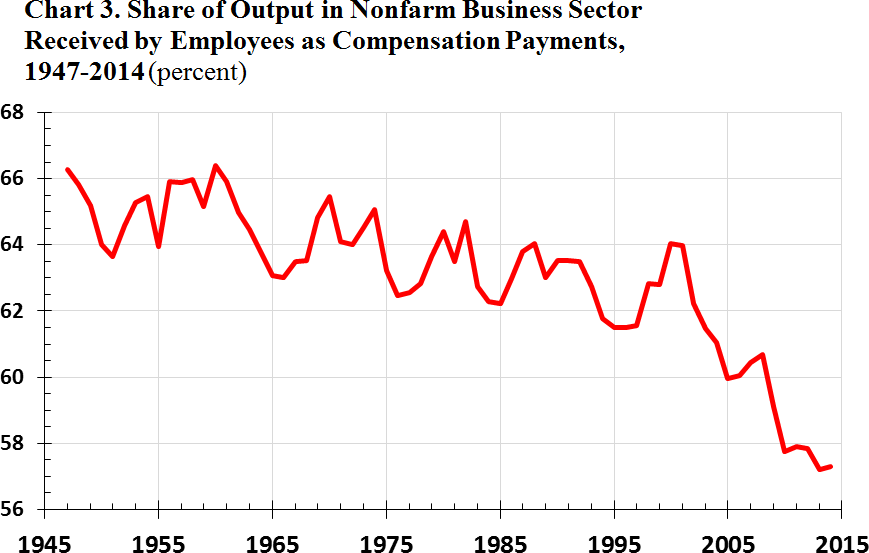 Wal-Mart’s decision to boost the wages of its least well paid workers may signal a shift in the balance of bargaining power between employers and their workers. The available evidence suggests, however, that the overall pace of real wage increase remains modest compared to productivity gains. We are still a long way from an inflationary wage spiral. Tightening policy in order to avoid such a spiral seems almost comically premature.